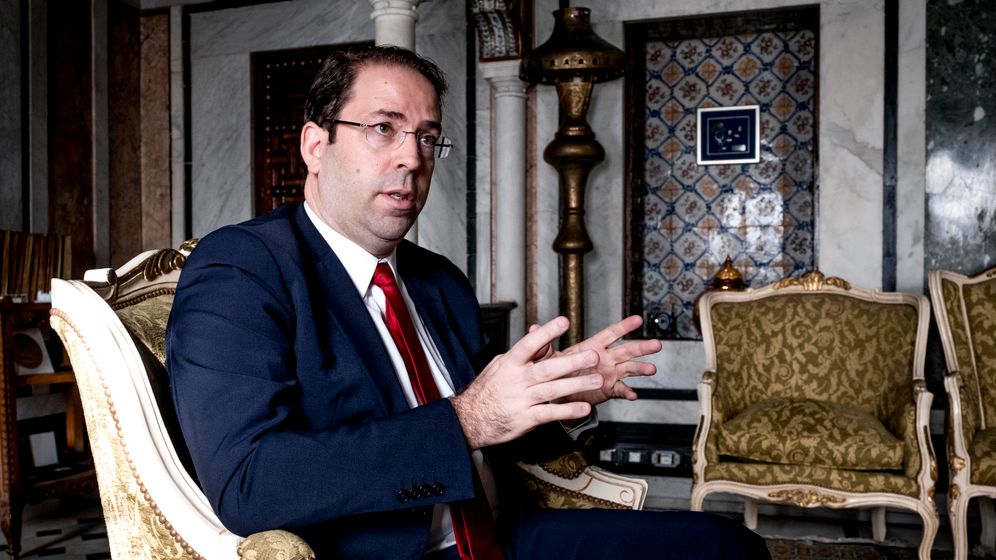 SPIEGEL: Mr. Prime Minister, how did you react when you learned that the suspected attacker in Berlin was a Tunisian?

Chahed: I was appalled by what happened to the Germans, and my first thoughts were with the families of the victims. But the perpetrator, Anis Amri, does not stand for Tunisia or the Tunisian people, and the Germans know that. This barbaric act will not affect relations between our two countries. Terror today no longer has a nationality. It is a global problem. These attacks are organized by globally operating groups with the help of the internet. We must combat this together, even more intensively than before.

SPIEGEL: One of your diplomats said that Germany should not forget that Tunisia is the single blossom in the Arabic desert -- the only country in which a democracy arose out of the revolution six years ago.

Chahed: Some terrorists do come from Tunisia, yes. But despite this, Tunisia is not the country of perpetrators -- it is also a target for jihadists. In 2015 alone, we had three serious attacks. Islamist extremists hate us because we are proving that a secular democracy can actually work in the Arab world. After 23 years of dictatorship, we have a new constitution, new laws, free elections, a supreme court and freedom of the press and expression.

SPIEGEL: Your family has always been considered very modern. Your grandmother was a militant feminist and one of the first female members of the Tunisian parliament during the 1950s.

Chahed: Yes, and now equal rights in this Islamic country are guaranteed in the constitution. That doesn't always work so well in daily life, I admit that, but we are working on it. I have eight female ministers in my cabinet, including the finance minister, a central post. I am proud of this.

Chahed: That is perhaps our greatest problem. We urgently need to secure these democratic successes with sound economic footing. The previous governments did not do enough to address that issue. Many people here are disappointed in what the revolution brought them as individuals. We need more growth. We had around 1.5 percent from 2010 to 2015, but that's not sufficient for creating enough jobs. At the same time, Tunisia has abundant potential. We now need to initiate economic reforms. We are reforming our banking system, our education system, we will make international cooperation easier and get rid of administrative red tape. All at once. And we are fighting corruption, which is a major challenge. But you also have to consider the fact that Tunisia has a more than 3,000-year history. The six years that have passed since the revolution aren't many -- but we have nevertheless come a long way.

SPIEGEL: But how do you intend to create jobs, especially for young people?

Chahed: Tunisia has few commodities like oil or natural gas, but we do have many young, able-bodied people. The environment has to be right. Our main priority is security. We are investing a lot of money to modernize our security authorities. We share, for example, a 471-kilometer-long border with Libya, and we have to protect ourselves from the unstable situation there. That's why we have doubled the defense budget relative to 2012. Our intelligence services now have a close watch on terror suspects. Life here is just as safe as it is in European countries. But there's no such thing as absolute security anywhere -- just think of Berlin, France and Istanbul.

Chahed: That's why we have new laws that make investments easier. There's public-private cooperation, perks for investors and expedited approval procedures. We have 3,000 foreign companies here -- with their presence, they are showing their confidence in the country.

SPIEGEL: The German government supported Tunisia with 290 million euros in development aid in 2016. Is that enough?

Chahed: European governments shouldn't just think of numbers when it comes to aid to Tunisia. As a young democracy, we can become a strategic partner for Europe. There is no other country that can offer such a positive model for developing nations. Tunisia is also protecting Europe's borders by securing the border to Libya. Chaos prevails over there, Islamic State (IS) is on the rampage, there are various other jihadi groups, militants and tons of weapons. Some 95 percent of all refugees who reach Italy travel through Libya, but only few pass through Tunisia. Europe should take that into account.

Chahed: For example: Tunisia has never had a strong army despite the dangers posed by our geographical location. We are, however, nevertheless forced to purchase equipment for the military at international market prices because no government provides us with discounts. We have to justify these expenditures to the International Monetary Fund because they have an impact on our deficit. We then lack money for development expenditures like infrastructure, for example.

SPIEGEL: You took office in August and your cabinet is calling itself the National Unity Government because it is backed by several parties and several groups of society. Won't that make governing more difficult?

Chahed: I do not want to say that it is easy. But all the groups have signed the so-called Karthago Document and, by doing so, have committed to undertake economic reforms in particular. It's a clear mandate that I will fulfill. In recent years, we have also developed a kind of "New Deal." Considerable debate is taking place here between trade unions, parties and civil society groups. Without this dialogue, we would not have fared as well in weathering the crises of recent years. And all are unanimous that reforms are decisive for our future and the fight against terrorism.

SPIEGEL: In mid-February, a meeting is planned between you and Chancellor Merkel in Berlin, one that will likely also address the issue of perpetrator Anis Amri. There's resentment in Germany over the fact that the terrorist would have been deported -- if only your country had issued the necessary documents.

Chahed: We were not slow on this case. We adhered to the normal procedures and carried out our work correctly.

SPIEGEL: Could it be that you are under pressure domestically not to repatriate such men? Just a few days ago, a protest took place here in Tunis opposing the repatriation of terror suspects.

Chahed: You have to keep two things separated. There are illegal immigrants from Tunisia who are living in Germany even though they aren't allowed to. Anis Amri was for us such a case. Because in Tunisia, he was at most a petty criminal but not a terrorist. Like so many others, he first radicalized during his time in Europe, in Italy. The situation is different in cases of terrorists who are fighting abroad or committing attacks. Many people here are indeed protesting against the return of such jihadis. My answer to this is unequivocal: Since 2015, we have had anti-terror laws in order to imprison returning extremists. Every jihadi who has fought for IS in Syria or in Iraq will be immediately arrested upon his return. Many other countries in Europe also fear the return of these well-trained fighters because they could destabilize their countries.

SPIEGEL: But you first have to capture the terrorists and then prove the crimes they have committed.

Chahed: We have all the information about these Tunisians, we know their identities and we update our findings constantly, in cooperation with the authorities in other countries. We unfortunately have a lot of experience in the fight against Islamist terrorists -- it's not a phenomenon we are just discovering now.

SPIEGEL: Your confidence in this regard is a bit surprising. Terrorism experts can't even agree on how many Tunisians have joined up with Islamic State. The numbers vary between 2,000 and 7,000 men.

Chahed: The exact number is 2,929. Many of them have since died.

SPIEGEL: How do you know that?

Chahed: Tunisia is a small country. We have 11 million residents. It sticks out here when someone disappears for a longer period of time. Our officials then dig deeper within the person's circles in order to find out the whereabouts of the person who has gone underground. We have procedures for doing that.

SPIEGEL: In Germany, there is a debate over whether Tunisia can be considered a safe country of origin. Are minorities and members of the opposition safe in your country?

Chahed: Yes, there is no state-organized persecution of such people.

SPIEGEL: At 41, you are the youngest prime minister Tunisia has ever had. But you are also the seventh head of government since the Arab spring. How long will you be able to maintain power?

Chahed: The reason behind the frequent changes was the instability we had to combat after the dictatorship. But now our stability is improving. I am optimistic when it comes to Tunisia's future.