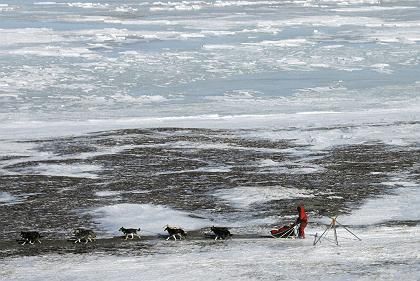 An Alaskan man drives a dog team along the Bering Sea. Russia says it is planning a tunnel to connect Siberia to Alaska across the Bering Strait.

Russian ministers have unveiled a grandiose plan to dig a tunnel under the Bering Strait from Siberia to Alaska in a bid to improve oil and gas transport between Russia and the United States. The ambitious project would also open up the intriguing possibility of a rail connection from New York to Europe over Asia.

The Russian government told reporters in Moscow this week that it will back a $65 billion scheme by a consortium of Russian companies to build the longest tunnel in the world -- which will be an estimated 102 kilometers (63 miles) in length -- to link Russia's vast energy resources to markets in North America. The plan includes a high-speed train line, oil and gas pipelines, and a fiber-optic cable network.

The plan will be presented to US and Canadian officials next Tuesday, at a Moscow conference called "Megaprojects of Russia's East."

"The project would give Russia's east the chance to become a leading industrial region of the country and one of the most important transit hubs of the world economy," said a statement bearing the logos of Russia's pipeline monopoly Transneft, electricity utility RAO United Energy Systems and the Russian Trade Ministry, among others.

There's just one hitch: A number of powerful people appear to have been left totally out of the loop. "I've never heard of this plan," said Sergei Grigoryev, vice-president of Transneft, according to the London Times. "We need to first develop fields in East Siberia."

Some experts called the idea a bluff to scare European countries into signing long-term contracts with Russia for oil and natural gas.

"Russia has been saying to Europe, 'Listen, if you don't like us, we've always got China to sell our gas to,'" said Derek Brower, who covers the energy industry for the London magazine Petroleum Economist. "(But) it's even difficult for Russia to supply China, the fastest-growing energy market in the world, let alone to talk about what sounds like the most absurdly expensive and technologically difficult project to deliver. It just sounds completely outrageous to me."

One US supporter of the project is Alaska's former Governor Walter Joseph Hickel, who will co-chair the conference in Moscow. But the Washington's Federal Railroad Administration isn't directly involved in talks, agency spokesman Warren Flatau told Bloomberg.

High-level Canadian officials were also in the dark. "We are not aware of any Canadian government representatives that have been contacted with respect to this proposal," said Brooke Grantham, a spokesperson for Canada's office of Foreign Affairs and International Trade, according to the Vancouver Sun.

The proposed tunnel would be twice as long as the Channel Tunnel between the United Kingdom and France. But it's not a new idea: Czar Nicholas II first raised the prospect of a Bering Strait rail link in 1905, 38 years after his grandfather sold Alaska to America for $7.2 million. World War I -- and the Russian Revolution -- put the project on ice, however.