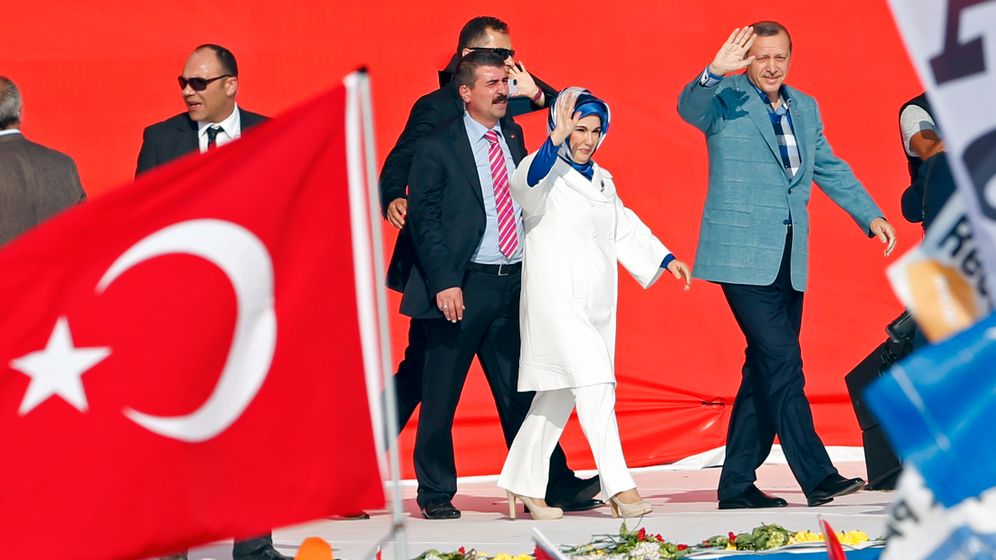 For a short time it looked as if Turkish Prime Minister Recep Tayyip Erdogan would relent, as if he had learned something from the revolt against his government that has taken place over the past weeks.

In the middle of the week, he met with demonstrators who are commited to the preservation of Istanbul's Gezi Park. He said that judges would deliberate on the future of the controversial park and held out the prospect of a referendum. Would Erdogan, the despot of the past two weeks, transform himself into a mediator? Since Sunday night at the latest, the answer has been a resounding no.

At a rally in Ankara on Saturday, Erdogan reiterated that he was reaching the limits of his patience. After night fell, his security forces put these words into force. They used bulldozers to clear out Gezi Park, which had become a symbol of the resistance in recent days. They chased protesters and beat them down with clubs, and they shot tear gas into cafes and hotels as the people fled. Doctors who treated the wounded were arrested.

But on Sunday, demonstrators in Turkey returned to the streets to protest the government. At the same time Erdogan gave a memorable speech in Istanbul. Liberal commentators described it as "frightening" and "hateful."

Hundreds of thousands of Erdogan supporters who had been bussed in from throughout the region gathered in a field along the coast. They carried Turkish flags and portraits of the prime minister. Officials with Erdogan's Justice and Development Party (AKP), including European Union Affairs Minister Egemin Bagis, spurred on the crowd.

Then Erdogan took to the stage. His supporters chanted "Turkey! Turkey!" as he raised his arms triumphantly. Of one thing there is no doubt: The Turkish premier did not come to Istanbul as a mediator. And it was conflict he was looking for -- not reconciliation.

Erdogan evoked a Turkish Empire, greeting his supporters in the Balkans, in Angola and in Iraq. "Where is Sarajevo? Where is Gaza tonight?" he called out. His voice cracked, and, at that moment, he no longer seemed like the democratically elected prime minister of one of the world's largest economies. Instead he struck the figure of a crazed despot.

Erdogan then addressed the foreign media: "CNN, Reuters, leave us alone with your lies!" he exclaimed. For days now, Erdogan has sought to discredit the protests -- which began as a campaign against the demolition of a park in Istanbul and expanded into a nationwide revolt against the AKP-led government -- as a conspiracy conducted by foreign powers. "These forces want to harm Turkey," he said.

Finally, he addressed the protesters directly, once again calling them terrorists and plunderers. They aren't real Turks, Erdogan said, adding that they should be handled with caution. "Those who work against Turkey will tremble with fear," he warns, adding that he will hold accountable any hotelier who hides these "terrorists."

Erdogan's speech may yet prove to be fateful for the leader. The atmosphere is already charged, and now Erdogan is throwing more fuel on the fire. Rather than reach out to the protesters, he disparages them. But with each attack he is only driving more people out onto the street. Early on, the protest proved effective at bringing together citizens from various social backgrounds.

As Erdogan spoke on Sunday, young demonstrators in Istanbul watched the speech on television -- students, artists, lawyers. They were stunned and unable to believe their prime minister has denounced them as enemies of the state.

"Istanbul, are we one? Istanbul, are we united? Istanbul, are we brothers?" Erdogan shouted after nearly two hours. By this point, a few kilometers away, tens of thousands of demonstrators had once more gathered at Taksim Square. Despite the police and their clouds of tear gas, the protesters continued to march and demand Erdogan's resignation.