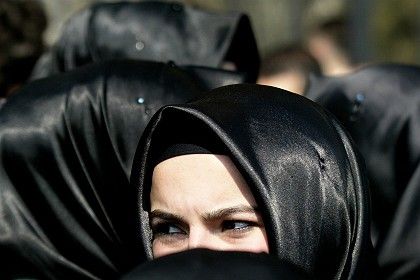 Keep covered and avoid the perfume: Turkey's highest religious authority warns women not to show their "adornments and figure."

Is wearing perfume a sin? Or casting a flirtatious gaze at a man? According to an article recently published on the Web site of Turkey's directorate for religious affairs, Diyanet, it is.

The article, which is drawing criticism in Turkey and raising attention abroad, essentially chalks women up as walking aphrodisiacs and puts the onus on them to cover up and prevent themselves from sexually stimulating men in any way outside their homes.

"Women have to be more careful, since they have stimulants," the article states, according to a report in the Guardian. "The women communicating with strange men should speak in a manner that will not arouse suspicion in one's heart and in such seriousness and dignity that they will not let the opposite party misunderstand them, that they should not show their adornments and figure and that they should cover in a fine manner." It even goes so far as to equate flirtation with adultery, according to critics.

The article also discourages women from wearing perfume. "His highness the Prophet Muhammad did not think kindly of women who put on perfumes outside their homes and go strolling and saw this as immoral behavior," it continues.

The article also reportedly said women should not spend time together with men in private unless married and questioned the virtues of mixed-sex workplaces.

Generally, Diyanet has promoted a moderate form of Islam and the article threatens to further inflame a roaring debate about the role of religion in what is constitutionally a secular state. The Islam-rooted Justice and Development Party of Turkish Prime Minister Recep Tayyip Erdogan is currently facing a legal challenge in the country's highest court, accused of undermining the secular principles upon which Turkey was founded, and faces the possibility of a ban in the future.

"It's like a comedy," writes Yusuf Kanli, a columnist with the pro-secular Turkish Daily News, "but the article appeared on the Web site of a state institution that is supposed to regulate the practice of Islam in the country according to the teachings (as perceived by the Turkish government) of Islam rather than those of some Islamist orders or brotherhood organizations.  Is this mentality different at all with that of the Taliban that placed Afghan women behind chadors?"

Ataturk, the founder of modern Turkey, established Diyanet in 1924 to ensure that Islam did not interfere with the country's strictly secular government. Although Diyanet has no legal authority, it is highly influential as the custodian of the Muslim faith in the country. It is in charge of the country's 70,000 clerics and is also responsible for appointing Turkey's imams.