The public prosecutor in Adana, a city in southern Turkey, has clear ideas on how the state ought to treat teenagers who protest by throwing stones. In his view, they should be arrested and locked away, preferably for life.

Last week the prosecutor demanded up to 58 years in prison for six young Kurds between the ages of 13 and 16. During a demonstration in October, the students threw stones at police officers, shouted illegal slogans and unfurled posters touting the banned Kurdistan Workers' Party (PKK). 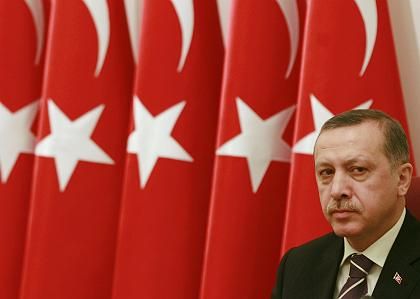 And because such teenagers, in his view, had to be the "children of terrorists," the provincial governor recommended punishing the families and cancelling their claims for pension and social benefits.

For months, trouble has been brewing once again in Turkey's Kurdish regions, and both sides are reacting in the customary way. Adolescents incited by the PKK are setting car tires on fire and committing acts of violence. In response, the military has brought in tanks and the courts are threatening the demonstrators with increasingly grotesque punishments.

Turkey, which is seeking entry to the European Union, is having trouble getting its most pressing problem under control. Prime Minister Recep Tayyip Erdogan, who only six years ago was still making cocky promises to put an end to the frustrating, drawn-out conflict, and who in 2005 was his country's first prime minister to speak out about the Kurdish conflict, is as helpless today as his predecessor was.

Long praised in the West as a peacemaker and reformer, a man who has made great strides in bringing his country closer to Europe, Erdogan is now revealing reactionary tendencies.

He has recently stopped calling for "cultural rights" for minorities, and is ignoring the human rights abuses being committed by Turkish police. Instead, he now prefers the language of the generals and nationalists. Turkey, Erdogan said excitedly in a recent speech to a Kurdish audience, is "one nation, one flag, one country." He added: "whoever doesn't like it can leave."

When Dengir Mir Mehmet Firat, the Kurdish-born deputy chairman of Erdogan's conservative Islamic party, the AKP, resigned from his position, the premier replaced him with a hardliner who prefers military force over dialogue when it comes to the Kurdish question.

What is happening with Erdogan? Has the ambitious modernizer had a change of heart? Has he lost his desire to drive his country toward the West? Or has the refined Islamist sought an alliance with the generals after all, after his party barely managed to escape a ban sought by the country's military leaders this summer?

Much points to a pact between the very different partners. Erdogan has been all too willing to support a campaign by military officers to curtail freedom of the press and opinion. In a dispute between the new Chief of the Turkish General Staff, Ilker Basbug, and Taraf, a small daily newspaper, the increasingly autocratic Erdogan threw his support behind the commander.

Taraf, currently Turkey's most courageous newspaper, had published documents suggesting that the general staff had learned in advance of an attack by the PKK on a military outpost near the Iraqi border. Seventeen soldiers were killed there in the Oct. 4 attack, and it has been suggested that they may have been sacrificed in an effort to spark public outrage.

Anyone who publishes such reports, General Basbug said irately, is "partly responsible for the bloodshed." He threatened to shut down the newspaper. "Be careful," Erdogan said in a warning to the journalists, noting that the "public peace" is a greater good than the freedom of the press. In November, the prime minister himself took action against the press, ordering his press office to cancel the accreditation of seven journalists working for the Dogan media conglomerate.

Erdogan had already recommended in September that the newspapers and television channels owned by Aydin Dogan, including such mass-circulation newspapers as Hürriyet, Milliyet and Posta, should be boycotted. By that point the premier and his adversary were already embroiled in a war of words. The powerful media czar had published detailed stories on the AKP's possible involvement in a scandal over political contributions in faraway Germany.

A Frankfurt court had convicted members of Deniz Feneri, a religious charity, of embezzling donations from Germans of Turkish descent worth €18 million ($23 million). The money, according to the prosecution, ended up in the "AKP environment." The extent of Erdogan's involvement in the case remains unclear, but his party's reputation is tarnished. Ironically, it was the AKP that has consistently prided itself, as an Islamist party, in being free of corruption and of having distanced itself from the sleaze of former administrations.

Erdogan, increasingly irritable and thin-skinned, appears to be running out of luck. Even the economy, previously the greatest plus in the AKP government's six-year tenure, is slowing down. For weeks, cabinet ministers and even President Abdullah Gül had led the world to believe that Turkey would remain largely untouched by the global financial crisis. No one should be alarmed, they said, because the country had gone through its own severe crisis in 2001 and, after that, had taken decisive steps to prevent it from happening again.

But since then Ankara has entered into surprise negotiations with the International Monetary Fund for billions of euros in new loans. Hundreds of thousands of job are in jeopardy, experts warn. Once economic growth declines, the government can expect to lose some of its support next year. Pollsters predict that the AKP will get only 34 percent of the vote in local elections in March, compared to 47 percent in the 2007 parliamentary election.

"They are being exposed in the current crisis, the so-called reformers," says Cengiz Aktar, a political scientist and well-known Erdogan critic, who accuses the government of incompetence and mediocrity. "In reality, the groundwork for most of the economic reforms was already laid before the AKP came into power." And political reforms, says Aktar, were only implemented between 2002 and 2004 -- in other words, until Turkey was granted candidate status for EU membership.

Since then, the only attempts at reform have favored devout wearers of the headscarf. This, says Aktar, is why he is not surprised by Erdogan's growing emphasis on nationalism and Islam. Instead, Aktar characterizes the changes taking place in Turkey as a "restoration" and, therefore, as a "normalization of Turkish conditions." There have always been marriages of convenience between the mosque and the barracks in Turkey. This, says Aktar, is why it is all the more important that Europe does not abandon the country now.

Aktar believes that unless Brussels applies pressure on Turkey to continue with reforms, Erdogan's chauvinistic tendencies will only increase. And then, he warns, "we will soon be dealing with a Turkish Bonaparte."