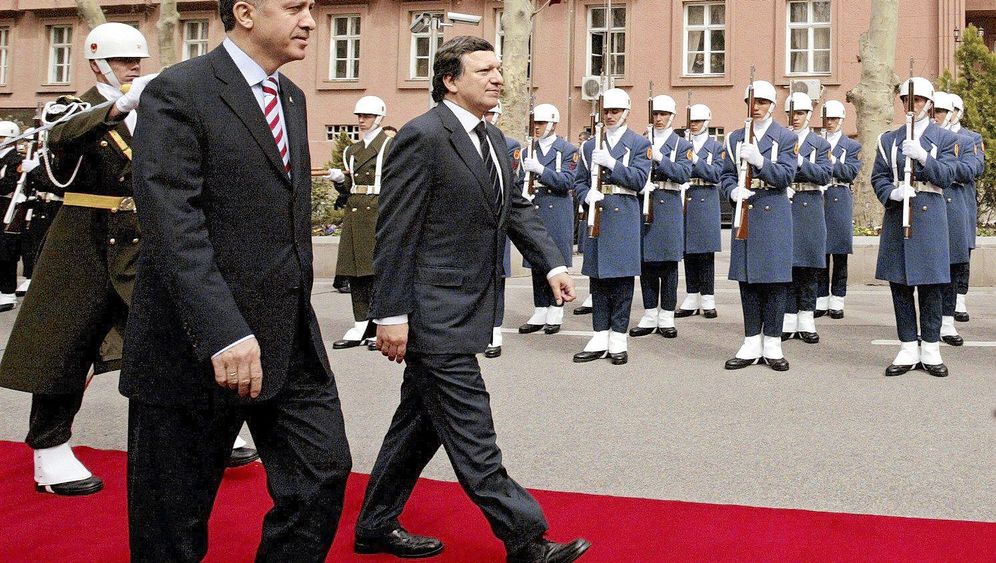 SPIEGEL: Mr. Bagis, why does Turkey still need a minister for European Union affairs? Isn't Europe a dead issue in your country?

Bagis: Absolutely not. My government is investing more energy in the reform process than any other government. In 2013 we will be ready for accession.

SPIEGEL: But do Turks share your enthusiam? Three out of four Turks believe that the EU wants to divide your country and spread Christianity.

Bagis: I have other figures: If Turkey held a referendum today on accession, 60 percent would vote for it. On the other hand, only 40 percent of Turks believe that accession will definitely take place. In Europe it is the other way round: Forty percent want to take Turkey in, but 60 percent believe the country will join the EU one day.

SPIEGEL: In other words: There is skepticism on both sides.

Bagis: Let's put it this way: Some countries like Malta apply for membership and are in the next day. Others need a little more time. I have no problem with the fact that some Europeans say they want negotiations with an open-ended outcome. Today everything has an open-ended outcome, even Catholic marriages.

SPIEGEL: Turkey has been seeking EU membership since 1959. Is it not humiliating to be held at bay for so long?

Bagis: No, because we also made mistakes. There have been three military coups since 1959, and many Turkish government's didn't have a clear vision or idea of Europe. It was the Justice and Development Party (AKP) government of Prime Minister Recep Tayyip Erdogan that first made the necessary constitutional amendments between 2002 and 2004 so that we could finally start accession negotiations.

SPIEGEL: Only 17 percent of Germans support Turkish membership in the EU.

Bagis: Believe me, one day Europeans will have to appeal to the Turkish public to support EU membership. Europe has many problems. Tell me, for example, how the EU plans to solve its energy crisis without Turkish help? A large part of the future energy resources Europe needs will flow through Turkey. And tell me how you are going to solve your economic and demographic problems? The average age in Europe is 40, while in Turkey it is 28. Where are you going to get your work force from? Who is supposed to pay your pensions?

SPIEGEL: As long as declared opponents of Turkish accession like German Chancellor Angela Merkel and France President Nicolas Sarkozy are in office, you won't get very far with such arguments.

Bagis: I am very thankful that German Foreign Minister Guido Westerwelle has publicly stated that he wants accession talks to continue. With regards to President Sarkozy: He used this horrible, insulting phrase, "privileged partnership" ...

Bagis: But Sarkozy repeated it often enough. My government has only one answer: We will only accept full membership -- nothing more, nothing less. We want the same chances as every candidate country.

SPIEGEL: Atatürk, the founder of modern Turkey, said: "The Turks have only ever gone in one direction -- towards the West."

Bagis: And that is still true. But at the same time, we are also a bridge and have four strong pillars, one in each direction ...

SPIEGEL: ... of which you recently pulled out two by recalling your ambassadors to the United States and Sweden. The move was triggered by the decision of a Congressional committee to pass a resolution recognizing the death of more than a million Armenians in 1915-16 as genocide. A similar resolution was passed by Sweden's parliament.

Bagis: With this decision, Sweden has become slave to a thesis that, unfortunately, is based on falsehoods. The voting in the US on the so-called genocide was a success for Turkey. The Congressman from California, who got support from the Armenian lobby, made a fool out of himself. He tried to scratch the back of every Representative in the corridors of Congress in order to get their vote. But then he only won by a single vote.

Bagis: Secretary of State Hillary Clinton later declared that the resolution will not be passed by the entire House of Representatives. As you know, the French parliament passed a similar law on the so-called Armenian genocide in 2006. Afterwards there was a ban on French airforce flights over Turkey. We are very sensitive about this issue.

SPIEGEL: What options do you have if the Americans do, in the end, recognize the genocide officially? Would you want to close the Incirlik airbase? Leave NATO?

Bagis: I will leave that up to your readers' imagination. But allow me to remind you of one thing: Seventy percent of the logistical support for the Iraq deployment comes through Incirlik.

SPIEGEL: Why is it so difficult for Turkey to recognize the genocide of the Armenians?

Bagis: It is up to the historians, not politicians, to judge what happened in the past. Politicians look into the future. We have offered to create a joint commission of historians together with the Republic of Armenia -- so far without success. Besides, you should know that the Ottoman Empire was an ally of the German Reich. Nothing that happened back then happened without consultations with the Germans.

SPIEGEL: If you dont accept the word "genocide," then how can you have a "Genocide Museum" in the city of Igdir in eastern Turkey, dedicated to the Turks who died in 1915?

Bagis: That's very easy: Every action leads to a reaction. But I don't want to rule out the possibility that, someday, this museum could be transformed into a "Museum of Coexistance" or a "Museum of Mutual Pain." I do not want to deny that the Armenians went through very difficult times ...

SPIEGEL: You call it "difficult times"? We are taking about 1.5 million Armenians who perished between 1915 and 1917.

Bagis: According to American historian Justin McCarthy, 600,000 Armenians died at the time -- and at the same time, 2 million Kurds and Turks. There was a civil war in Turkey, right in the middle of World War I.

SPIEGEL: The interior minister at that time, Talat Pascha, told the then US ambassador, Henry Morgenthau, that the "physical extermination" of the Amernians was a necessary goal of the war.

Bagis: According to McCarthy, this quote isn't entirely accurate. But I am not a historian. I wasn't there, you weren't there. Why don't we leave this question to a mutual commission of historians comprised of Armenians and Turks?

SPIEGEL: There was a time when Turkey seemed further along the road toward confronting its past. In 1919, the three men mainly responsible for the Armenian genocide -- Talat Pasha, Enver Pasha and Cemal Pasha -- were all sentenced to death in absentia. Atatürk wanted nothing to do with them. Nevertheless, there are still three large, magnificent tombstones for these men in Istanbul.

Bagis: It is traditional in our culture to commemorate the dead. Like all of us, these men surely did some good and some bad things in their lives and for their country.

SPIEGEL: Is Turkey worried the Armenians will demand reparations?

Bagis: You know, there are an estimated 100,000 illegal Armenian immigrants in our country, who work here providing care for the elderly and children. For me, this shows that there is no hate between our people. On the contrary: We are attempting to achieve rapprochement, there is a peace process between our countries

SPIEGEL:  which is stagnating at the moment.

Bagis: That is not our fault. We have attempted to bridge our differences; we want to open all archives. But when you see that the other side is blocking all your attempts, it makes you skeptical.

SPIEGEL: This issue represents one of the few on which the AKP government, the military and the secular elite are all on the same page. Doesn't that bother you?

Bagis: No. My government focuses on solving problems. We want good neighborly relations, also with Armenia.

SPIEGEL: Turkey's new foreign policy earned considerable praise, but the country's domestic policies have been enigmatic for some people in the West. Isn't your government overplaying its hand in its power struggle with the army? You are no longer arresting only potential putschists, but also critics of the government.

Bagis: The investigations in the so-called Ergenekon case, where men are suspected of having planned a putsch against the government, are an issue for the judiciary. In the latest progress report, the European Union assesses the investigation as an opportunity for Turkey to further democratize itself.

SPIEGEL: Others see signs of continuing Islamization. Restaurants are losing their alcohol licenses, young people are being harassed for holding hands in public and Family Minister Aliye Kavaf has described homosexuality as a "disease."

Bagis: I do not agree with her, I do not consider homosexuality to be a disease. But I am neither a historian nor a doctor. Besides, I really don't think that Turkey has become more conservative. It just so happens that the conservatives are a lot more visible today than they were previously. 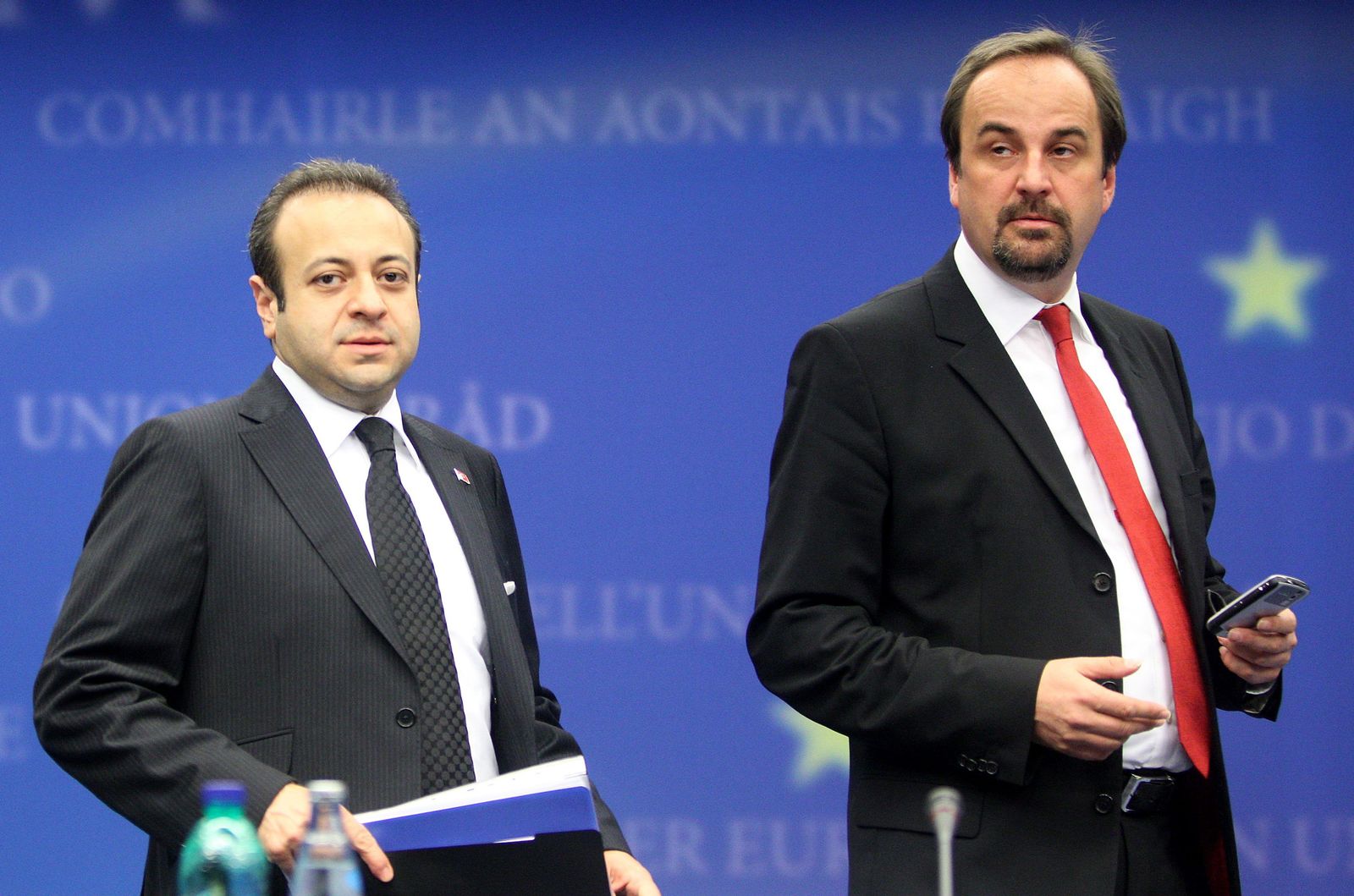 Turkish Minister for EU Affairs and chief negotiator Egeman Bagis: "There are an estimated 100,000 illegal Armenian immigrants in our country, who work here providing care for the elderly and children. For me, this shows that there is no hate between our people. On the contrary: We are attempting to achieve rapprochement, there is a peace process between our countries."