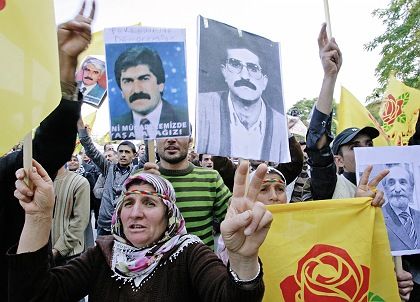 Kurdish protesters in Ankara: "In areas where police have acted with reserve, the protests have remained peaceful."

SPIEGEL ONLINE: There's been a state of emergency in the Kurdish regions of Turkey for weeks now. People are protesting against the alleged abuse of imprisoned PKK leader Abdullah Öcalan. Is the situation escalating?

Türk: The public has been informed about Mr. Öcalan's poor treatment by his attorney. For millions of people, this is a highly sensitive issue. We have asked the government to investigate the case -- without any success, unfortunately. That's why the people have called for peaceful demonstrations and protests. The reason there have been altercations is the disproportionate violence applied by the security forces. But in areas where the police have acted with reserve, the protests have remained peaceful.

SPIEGEL ONLINE: Do you fear a civil war will break out?

Türk: I wouldn't call it a civil war. Turks and Kurds are two people who have lived together for hundreds of years and have grown together. The conflict could be easily resolved if Kurdish citizens were given their political and cultural rights. But I do think we're headed towards a wave of violence.

SPIEGEL ONLINE: For your part, you have spoken of "genocide against Kurds." Aren't you fanning the flames with such comments?

Türk: That quote has been taken out of context. With that I didn't mean an ethnic, but rather a cultural and social genocide, which this country has been responsible for since the military putsch of 1982. Back then a war was waged against the Kurds, political parties were forbidden, intellectuals were arrested and tortured, books were burned. And the anti-democratic constitution of the military junta is still valid today.

SPIEGEL ONLINE: There has also been a legal effort for the past year to ban your party, the DTP. Do you think your party will be acquitted?

Türk: It would be a huge historical error to ban us. We consider it to be our mission in parliament to solve Turkey's biggest problem, the Kurdish conflict, using democratic means. This bridge should not be torn down.

SPIEGEL ONLINE: A bridge to the PKK? 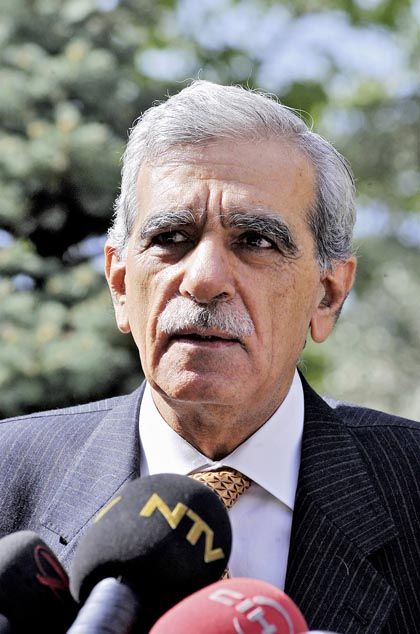 Türk: Speculation pops up again and again that DTP and the PKK do things together, but it isn't true. We issue concrete political demands, whereas the PKK wages war.

SPIEGEL ONLINE: But why is it so hard for you to distance yourself from the PKK?

Türk: Listen, it isn't just the PKK that relies on violence -- the Turkish state does so just the same. The balances of power are always unequal, and the Kurds' cultural identity still isn't recognized, the population is massively intimidated. What we need first is a dialogue, not a decimation campaign.

SPIEGEL ONLINE: In July, three German mountain climbers were kidnapped by the PKK. Why wasn't the Turkish army able to use your party as a mediator?

Türk: A short time ago, nine Turkish soldiers were kidnapped. At the time, we tried to mediate and we dispatched our friends into the mountains. But what effect did it have? We were accused of cooperating with the enemy and some of us were put on trial. That's why we didn't intervene in the case of the German mountain climbers.

SPIEGEL ONLINE: Mr. Türk, in the 1980s, you spent close to two years at the infamous military prison at Diyarbakir. You experienced great cruelty there. Prisoners were hung by both arms, whipped and tortured with electroshocks. Has Turkey really started to deal with this dark side of its history?

Türk: The 1980s were another time and they will not return. Back then, in jail, we just wanted to die. We had no hope left. Today we are experiencing globalization and we are conducting accession talks with the European Union. I am convinced that the resolution of the Kurdish conflict will move a big step forward once Turkey has completely fulfilled the Copenhagen criteria. But there are still circles in Turkey that are resistant to change and democratization. These circles fear they will lose their power and they are trying to stop any kind of effort to deal with our difficult history.