Cemile just wanted to get some fresh air and escape the feeling of confinement that the curfew in Cizre had brought with it. It was shortly after 8 p.m. on Sept. 4. Darkness had fallen over the city in southeastern Turkey. In the distance, Cemile could see the fire in the mountains. The soldiers were burning down the forests to destroy the Kurdish fighters' hiding spots. "But don't go on the street!" Ramazan Cagirga, her father, called out.

Outside, as is so often the case these days, shots could be heard. Suddenly a loud noise could be heard nearby. Cemile -- 12 years old, long hair, brown eyes, with pearl earrings -- collapsed on the spot. A gunshot had traveled through the wooden gate to the front yard and killed the girl. Eyewitnesses report it coming from an armored vehicle.

"We hoped Cemile would survive," her father says. "We carried her into the house, but there was nothing we could do." He then tried to organize an ambulance to pick up the body. But nobody came, because of the gunshots and the curfew. During the day, temperatures reached over 40 degrees Celsius (104 degrees Fahrenheit), so they cleared out the freezer, wrapped the body in cellophane and froze it. The girl's body spent three days there before a car finally came to take her to the hospital in the neighboring city of Sirnak. Cemile's family buried her on Friday.

The family had already lost relatives in an attack by Turkish security forces once before. In 1992, a grandfather, sister, aunts and uncles of Ramazan Cagirga died -- seven people in total. The house -- the same home where Cemile died this month -- had been shot at.

It's not just the deaths in the Cagirgas household that seem to be repeating themselves. Between 1984 and 2013, 40,000 people, mostly Kurds, died in Turkey's bloody civil war. Now both sides are ramping things up once again, with attacks by the Kurdistan Workers' Party (PKK), assaults by the Turkish army, a state of emergency, restrictions on news coverage and a general climate of fear and violence.

There are two reasons for the current escalation. The first is the loss by President Recep Tayyip Erdogan's Justice and Development Party (AKP) of its absolute majority in recent parliamentary elections. Then, on July 20, a suicide bomber blew himself up in Suruc, near the Syrian border. The attack, attributed to the Islamic State (IS), killed 32 people, overwhelmingly young, pro-Kurdish activists.

Shortly thereafter, members of the banned PKK killed two police officers in Ceylanpinar, 200 kilometers (124 miles) to the east, in "retaliation for the massacre in Suruc." Two days later, Turkish fighter jets began flying air raids, officially against "all terrorists who are our enemies," as the government put it. As it turns out, the air force did fly a few raids against Islamic State in northern Syria --but it flew considerably more against PKK positions in northern Iraq.

Since then, the war between the Turkish state and the PKK has flared up again, and nothing remains of the peace process that took place over the past two years. Over 100 soldiers and police officers have been killed in attacks; the PKK described these murders, conducted through remotely detonated bombs, as "self-defense." And at the same time, according to Erdogan, 2,000 PKK fighters have since been killed by Turkish security forces, along with a number of civilians. The situation is so heated that conciliatory voices are being ignored. Those who began the violence haven't played a role in the situation in a while -- and now there is little more than provocations and recriminations from both sides.

Last week, Erdogan declared "all that" wouldn't be happening if one party -- by which he means the AKP -- had 400 representatives in parliament. That would give him the two-thirds majority needed to change the constitution in order to introduce a presidential system that would further concentrate power around Erdogan.

'We Will Throw Them All Out'

The daily Hürriyet criticized Erdogan's statement, quickly prompting AKP supporters with sticks and stones to march to the newspaper's offices in Istanbul on two consecutive days. On one occasion, an AKP lawmaker led the rioters, accusing the newspaper of being "the same as the PKK." After Nov. 1, he said, "We will throw them all out."

Because the AKP government, which has been in power for over a decade, failed to build a coalition after the June 7 vote, new elections are slated to take place on Nov. 1. The failure shattered Erdogan's dreams of a presidential system. The reason for Erdogan's setback was mostly the HDP, which as the first pro-Kurdish party, managed to pass the 10 percent hurdle and enter the Turkish parliament. Leading AKP politicians blamed the party for the loss of their parliamentary majority.

Critics argue that Erdogan then consciously pushed the country into chaos in order to portray himself as a strong leader. He is risking a civil war, they claim, in order to win the Nov. 1 elections. And some, especially Kurds, believe he also wanted to take revenge on the HDP. "AKP has purposely allowed the coalition negotiations to fail and wants to criminalize us, the HDP, by labeling us as terrorists, by seeking trials against individual members and pushing us closer to the PKK," says the party's co-leader, Selahattin Demirtas. "The AKP is provoking a civil war in order to take revenge for losing its majority."

On Sept. 8, ultranationalists stormed HDP offices around the country and set the buildings on fire. In Ankara, an HDP employee tweeted: "Our headquarters are being attacked. The police are not doing their job." In Istanbul, anti-Kurdish youths marched through the streets with torches and yelled: "We don't want a military operation, we want a massacre!" In hundreds of locations the next day, honking cars with waving Turkish flags drove through the streets and celebrated the violence. In many places, Kurds preferred to leave their businesses closed. They were scenes reminiscent of the pogrom night in September 1955, when Istanbul's Greek minority was expelled.

Demirtas, who is otherwise always careful to sound level-headed, allowed himself to be carried away with an emotional appeal. "When they come to attack your house, your job, your party or your party's building, to lynch you and to kill you, then you have the right to make sure that they will regret having been born. Self-defense is the right of every living being. Without attacking innocent people and in the appropriate context and according to the laws, everybody should defend themselves and our party's buildings."

Cemil Bayik, a founding member of the PKK, who had thus far ignored all of the HDP's calls for a cease-fire, threatened the nationalists by saying that "starting now" they would "suffer." "Your mothers will regret having given birth to you," he said, announcing that the fight would be expanded to the western part of the country and to the cities.

These words reconfirm the beliefs of many Turks who see the PKK as a leading force in the destabilization of Turkey. Journalists close to the government like to remember that the PKK isn't just labeled a terrorist organization by Turkey, but also by the European Union and the United States. Western politicians and the media, they argue, have a tendency to "romanticize" them, because the Kurds are fighting against the Islamic State.

But even if Erdogan and the PKK were planning on it, the escalation so far hasn't given a boost to either. Polls currently show AKP garnering 41 percent of votes, a figure that mirrors the outcome of the June election. It's also very possible the HDP will again enter parliament. Although many supporters have turned away from it as a result of the PKK's violence, the party is at the same time gaining voters as a growing number of Turks become critical of their president's course of action. With every dead soldier or police officer, the anger grows, not only toward the PKK, but also Erdogan, who even nationalists are now accusing of sacrificing human lives for his own success.

The killing continues, especially in Cizre and in other places in the overwhelmingly Kurdish inhabited southeast. And it won't allow itself to be stopped again so quickly. Several municipalities have broken away from Turkey and declared autonomy. There, young Kurds with Kalashnikovs, Molotov cocktails and stones are calling the shots. Trenches and barricades made of rocks, rubble and car tires are meant to prevent the advances of security forces that are no longer simply responding with tear gas, but also with live ammunition and snipers.

Cizre has effectively been cut off from the outside world for more than a week, occupied by soldiers and police, run by people with guns. A curfew had been imposed for a week and then, after a break for 24 hours, for another day. The Internet and phones only function irregularly, with the lines being switched off on a regular basis so that PKK fighters can't communicate. People are still too nervous to venture out onto the streets, for fear of being shot. Sometimes the residents are able to upload photos of new victims -- like that of a mother bleeding to death while holding a seriously injured baby. Or of the old lady lying on the street.

Demirtas, the politician, says Cizre is the "Kobane of Turkey." He describes the 120,000 people there as being surrounded. Last week, he set out on a "peace march" to the municipality. Security forces stopped him several kilometers away from the city. But he doesn't want to give up, he says, until he is in Cizre. 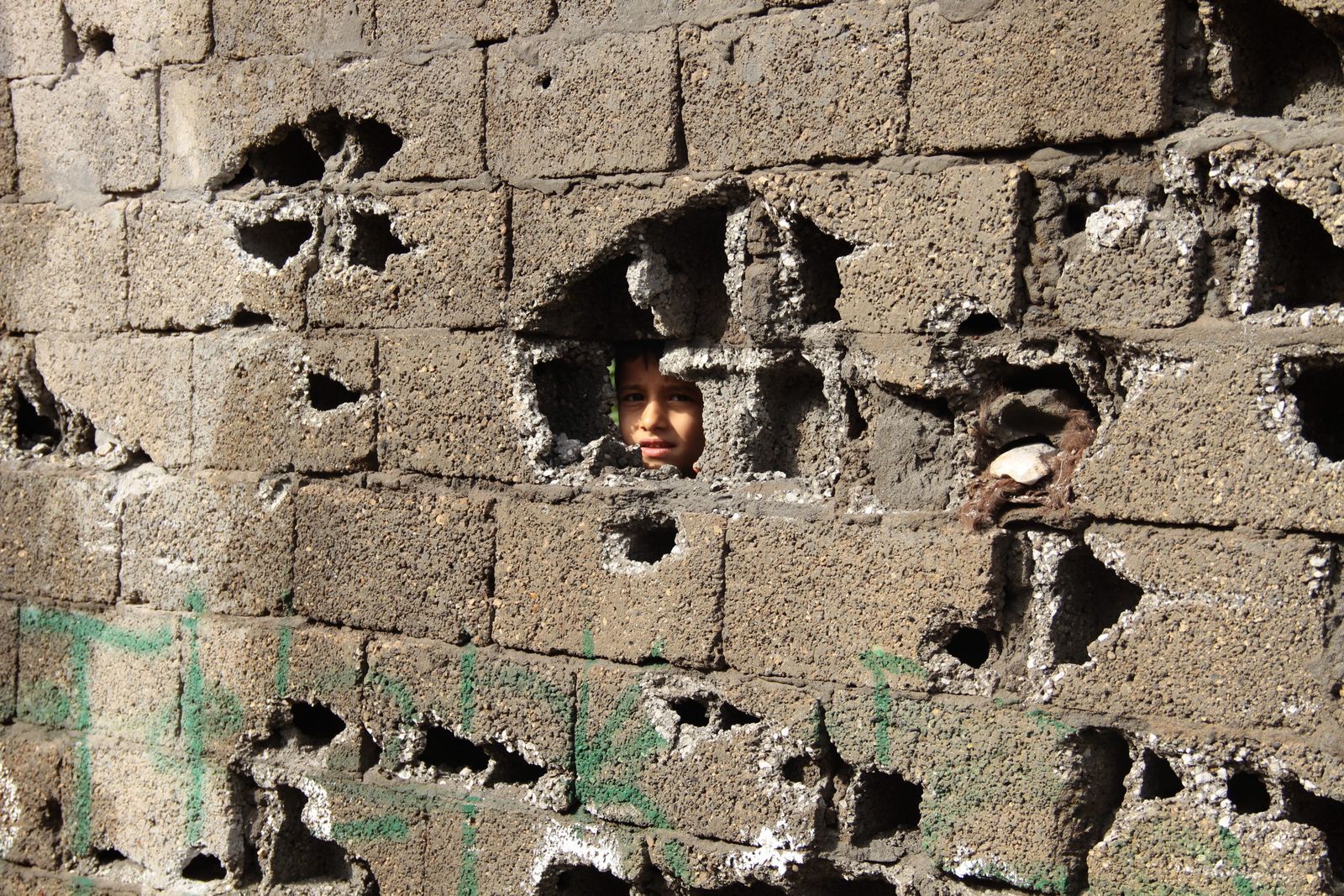 A boy peers through a hole in a damaged wall along a street in the city of Sirnak, near Cizre, southeastern Turkey. 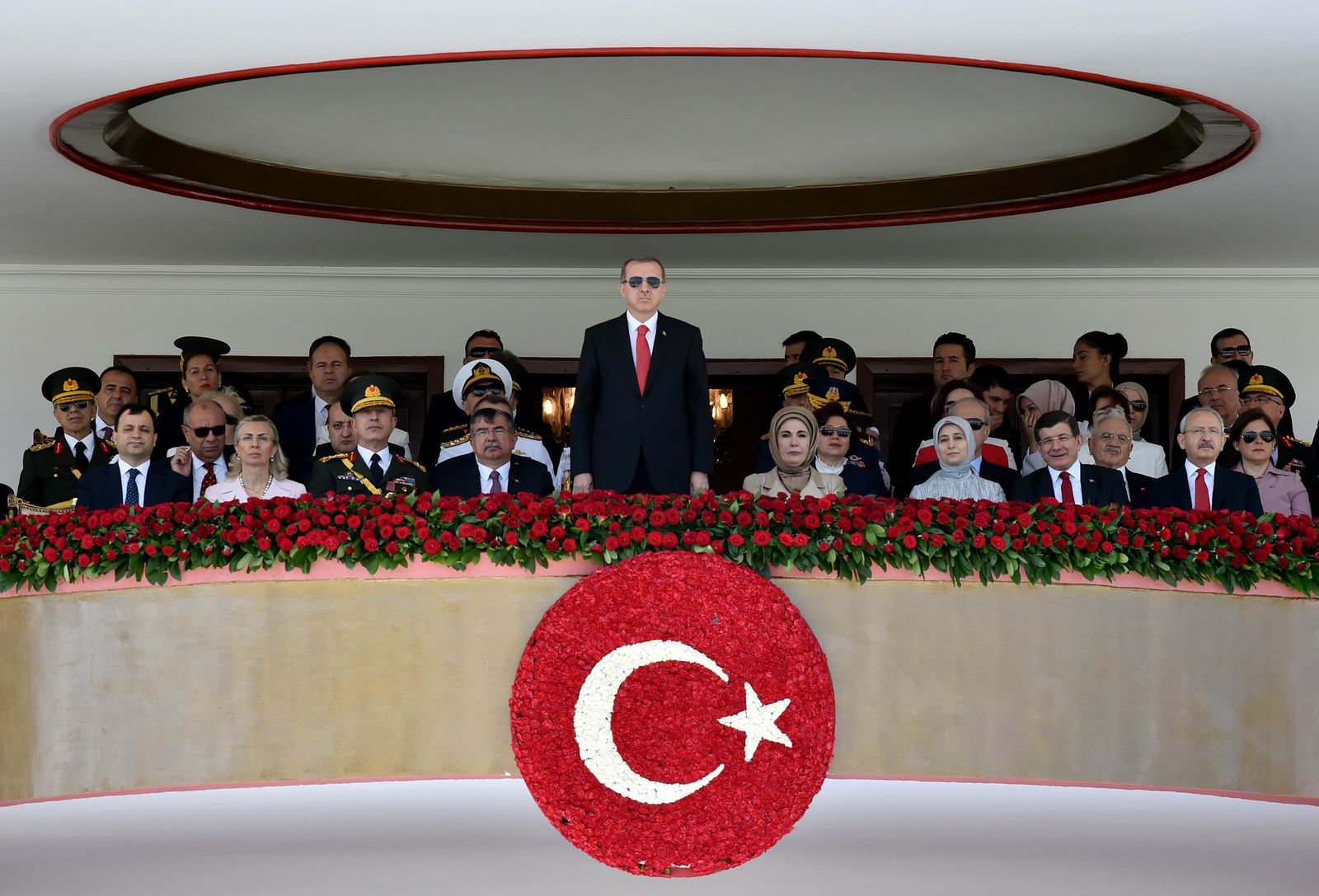 Turkish President Recep Tayyip Erdogan has ratcheted up tensions with the Kurds.