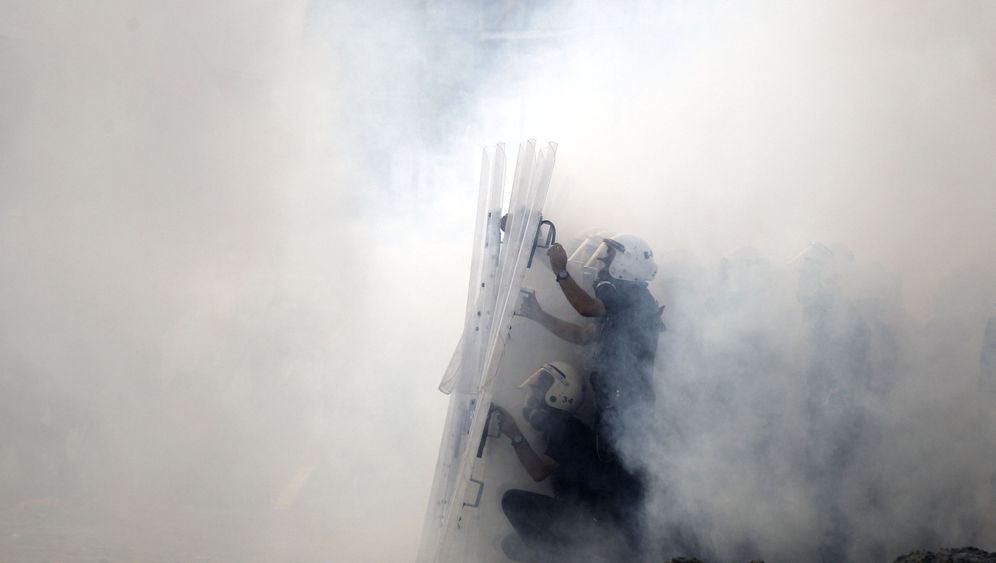 It's early evening, and they are flocking to Taksim Square in Istanbul once again, as they have been doing for many days now: schoolchildren, students, young doctors, lawyers and teachers, passing burned-out cars, banners and flags along the way. They walk down the steps to Gezi Park, accompanied by the sounds of drums and whistles. They want to celebrate their victory against the government.

Two Arab tourists are standing in front of a hotel near the action, watching the boisterous youths and wrecked cars with astonishment. In which country have they arrived, they wonder? Is this Turkey?

The turmoil on the Bosporus, which few would have believed possible, has been going on for almost two weeks. It began in Gezi Park, in the heart of Istanbul. "Welcome to the revolution," reads a sign attached to a tree. It's one of the trees that would be cut down, according to a plan by Prime Minister Recep Tayyip Erdogan, to make way for a giant new shopping center.

The fact that protests begun by people seeking to protect the trees could grow into a nationwide uprising, with at least three dead and more than 4,000 injured by Friday evening, is mainly attributable to the premier's stubborn and implacable words. Erdogan considers the resistance to his plans to be hostile to the state. By disparaging his opponents as extremists, he encouraged the police to use violence. As a result, peaceful demonstrators have been beaten in their sleeping bags, while police have used water cannon to spray others off the streets.

Last Friday, Cem Özdemir, the national chairman of Germany's Green Party and a German citizen of Turkish descent, came to Gezi Park to express his solidarity with the protesters. He was astonished to see young people of the most diverse backgrounds conversing with one another: Kurds, Alevi, leftists, nationalists, atheists and Muslims. "One almost has to congratulate Erdogan. Because of him, people have come together here who would normally be at each other's throats," said Özdemir. The most important message of the protests, he added, is: "We can also solve problems without violence."

The outcome of the conflict with the government remains uncertain. It reveals that although Turkey is developing political and economic ties with the West, it still lags behind socially. Many of the young demonstrators' concerns sound familiar, reminiscent of the Occupy movement and critics of capitalism, but also of the student protests of the late 1960s in Europe. There are some aspects of life in Turkey today that resemble a time that Germany and other Western countries also had to overcome once, a time when politicians sought to relegate women to the kitchen and demanded obedience from children. Turkey today is dominated by an authoritarian state ideology and an Islamic conservatism.

US and Europe Urge Restraint

It is already clear that the conflict has not improved Erdogan's standing in the West. Ankara has apparently ignored several calls from the United States and the European Union. Both US Secretary of State John Kerry and his German counterpart, Foreign Minister Guido Westerwelle, had urged the Turkish government to exercise restraint.

The furious Turkish leader has refused to back down. On the contrary, it seems that all the criticism against him just further incites the prime minister to threaten the protesters. And then, of course, there are Erdogan's large numbers of supporters, who constitute a majority. In the religiously conservative neighborhoods of Istanbul and other cities, on the Black Sea and in faraway Anatolia, they worship Erdogan, the son of a sailor, who has risen to become the most powerful politician since Kemal Atatürk, the founder of modern Turkey.

One of those supporters, 30-year-old engineer Giyaseddin Gergin, works in a modern office on the shores of the Golden Horn. A portrait of Atatürk and one of Erdogan, Gergin's great role model, hang on the wall. The office is part of the headquarters of the Justice and Development Party (AKP), where Gergin serves as head of the party's youth wing in Istanbul. With his impeccable manners and neatly pressed shirt, he answers questions about the current situation. In fact, he says, he is delighted to respond to our questions, because he finds the reporting on the situation in Turkey, especially in the Western media, to be one-sided and misleading.

"Of course the police made mistakes," says Gergin. "But does that justify the vandalism being committed by the protesters? And don't other countries have police violence? No one would hit upon the idea of calling it an American Spring when there are protests in the United States. But here they're talking about a Turkish Spring."

Superficially, the term seemd to fit -- after all, similar to the Arab Spring, well-educated citizens adept at using social media also took to the streets in Turkey. But the country is no dictatorship like Libya under Gadhafi, and its economy is booming.

A Challenge to the Prime Minister

When asked what else might have incited the Turkish protesters, Gergin responds, "We are dealing with three groups: environmentalists, who are defending the trees, extremists, who want to cause turmoil and, finally, those who have been losing one election after the next for years, and who now finally see an opportunity to call attention to themselves -- the Kemalists."

Gergin's boss makes the same claims. According to Erdogan, a radical minority is provoking the protests, and terrorists, possibly even those responsible for the attack on the US Embassy in Ankara a few months ago, are also involved. And, he adds, the "old elite" of Kemalists and their Republican People's Party (CHP) are trying to exploit the unstable situation.

Erdogan ignores the fact that many of his critics are just as opposed to the CHP as the AKP. According to a survey conducted by Istanbul's Bilgi University, 85 percent of the protesters are not affiliated with any party.

A new, non-parliamentary and unorganized opposition has in fact taken shape, one that is difficult to control and even more difficult to pigeonhole into old friend-versus-foe schemata. It presents a new challenge to the prime minister.

Like Erdogan, Gergin also refuses to allow that the demonstrators could have justified concerns. "It just happens that we are not a coalition government, which means that we can govern on our own. We have the democratic right to pursue policies that the majority of the people want."

It's the sort of argument used by those who see democracy as a vehicle to govern as they see fit. Why even bother with dissidents if this only slows down the decision-making process?

Erdogan systematically silences his critics. Since his government launched a questionable trial against an alleged network of conspirators, hundreds of military officers, as well as dissident professors and intellectuals have been imprisoned. The prime minister has taken action against influential media bosses and, even more so, against critical journalists.

But Erdogan also has his merits. The economy has grown rapidly since he came into office in 2003. He even implemented important democratic reforms, breaking the military's supremacy, abolishing the death penalty and liberalizing the constitution. He also embarked on a peace process with the Kurds. Turkey is undoubtedly a richer and more modern country today. But is it also freer and more liberal?

Of course, the AKP youth wing leader believes that it is. He is part of a conservative Muslim class that was once ostracized, because Atatürk wanted to keep religion out of politics. Today this class constitutes the elite.

'A Zone of Freedom'

Artist Zeyno Pekünlü lives in a different world from the young AKP official. She is sitting on a camping stool in Gezi Park, in front of a tent full of flyers with protest slogans, and behind a group of clowns making music and bearded political activists.

"Freedom is relative, but for Erdogan it is never the freedom of others," she says. "We, however, have created a zone of freedom for ourselves here."

Pekünlü, 33, is a thoughtful woman with melancholy eyes. She studied painting and earns a living as an artist and teacher. Right now, however, she's a "Gezi" protagonist. She's been there since the beginning, since the night of May 27, when members of a citizens' initiative stood in front of approaching bulldozers to protect the park. She calls her own organization Müterekler, or "The Commons," which, as she explains, is an umbrella organization for a wide range of groups: environmentalists, urban planners, refugee relief workers and women's rights activists.

From the standpoint of the strictly Islamic AKP supporters, a Turkish woman like Pekünlü shouldn't exist: someone who calls herself a feminist, unmarried, childless, her head full of fancy ideas.

"The whole world knows that it's about more than just a park and police brutality. The government's list of sins is long," she says, and then she begins to name them: the predatory exploitation of the environment, an unbridled construction boom, virtually uninhibited capitalism. In addition, says Pekünlü, Erdogan intimidates minorities and members of the opposition, and he tries to control the media and keep down the women's rights movement. He wants to use new laws to prevent people from drinking beer after work, and he has even tried to crack down on kissing in public.

"When it comes to women, the prime minister talks about our bodies as if they belonged to him," says Pekünlü. "He dictates to us how many children we should have and he wants to ban abortions, and yet he does nothing against the so-called honor killings, and against the daily acts of violence against women."

"Don't tell me how to live my life, what I should say and how I should dress, and what I should think, eat and drink. You are not my father," columnist Ahmet Hakan writes in an open letter to the prime minister.

But the nation's father figure remains determined to tame his disobedient children, using the power of the majority. After returning from a trip to North Africa last Friday, he told about 10,000 cheering supporters: "May Allah preserve our fraternity and unity. We will have nothing to do with fighting and vandalism."