DER SPIEGEL: As the special representative of U.S. President Donald Trump, you signed an agreement with the Taliban in late February. What did you achieve?

Khalilzad: We achieved several United States objectives: First, the Taliban have made commitments that they were not prepared to make before. These include a break with al-Qaida; not to host or support any terrorist groups that would threaten the security of the United States and its allies; and reducing violence. And that they will sit down with a national and inclusive Afghan negotiating team to chart a future political roadmap for their country together and finalize a comprehensive and permanent ceasefire.

DER SPIEGEL: The next step is supposed to be peace negotiations between the official Afghan government and the Taliban. But Kabul finds itself gripped by a serious political crisis. Two candidates for president have declared themselves winners of the election and held inaugurations. And they both control rival elements of the country's security forces. How dangerous is the current situation?

Khalilzad: It is dangerous. The Independent Electoral Commission has declared Ashraf Ghani the winner of the presidential election. Dr. Abdullah Abdullah does not accept the results and has raised valid concerns about the electoral process. It is important that the current political crisis does not devolve into violence. Potential violence stemming from the political crisis would have a negative impact on the security forces, on the peace process and on Afghanistan as a whole. We are working day and night to encourage all sides to make sure this does not happen.

DER SPIEGEL: By last Monday, the newly elected government was supposed to have appointed a negotiating delegation. Because of the political crisis following the presidential election, though, that didn't happen. What's the next step?

Khalilzad: As I said, this moment holds dangers. But there is also the opportunity for a major advancement in the peace process - if President Ghani and Dr. Abdullah can agree on an inclusive government led by President Ghani, and if that inclusive government can, with other political leaders, name a national negotiating team. From there, inter-Afghan negotiations with the Taliban can begin and the future political roadmap developed. The results of those negotiations would apply and hopefully put us on the road to a lasting peace for the Afghan people.

DER SPIEGEL: What role can be played by Afghanistan's allies? What can Germany do?

Khalilzad: Germany has offered to host or co-host intra-Afghan negotiations and support our effort to end the current political crisis and encourage the Afghans to form an inclusive national negotiating team. Germany can also support our efforts to push the Taliban to embrace the progress made in the last 18 years and to respect universal values, including the rights of women. It can also encourage other EU countries to do the same. That would be a meaningful contribution.

DER SPIEGEL: In 14 months, U.S. troops and international forces are to be withdrawn from Afghanistan...

Khalilzad: ...only if the Taliban stick to their commitments. It's very important to understand that the Taliban have to do their part. This is a conditions-based agreement. We will not look away if they commit a violation.

"This is a conditions-based agreement. We will not look away if they commit a violation."

DER SPIEGEL: What will happen after that with the military bases, the reconnaissance bases and the U.S. Special Forces?

Khalilzad: Our military presence in Afghanistan is not an end in itself. We want to reduce the burdens that this military engagement entails. The deployment here costs our country about 30, some even say 50 billion dollars a year. Our aim is to ensure that Afghanistan does not again become a platform for terrorists, from which the United States or our allies are threatened. We will honor our commitment on withdrawal as specified in the U.S.-Taliban agreement.

Khalilzad: President Trump campaigned on a promise to end endless wars, including Afghanistan and Iraq. It is about reducing the burden, repositioning some resources elsewhere, defending ourselves from terrorism and helping the Afghans find a political settlement after 40 years of constant war.

DER SPIEGEL: There have been recent reports from several regions of Afghanistan, such as Helmand, that violence between government troops and the Taliban hasn't abated at all since the signing of the agreement, and has even increased.

Khalilzad: We agree that the level of violence is too high. There are currently no attacks against the coalition forces, the level of violence in the cities is relatively low and the major highways are not blocked. But still, there is too much violence. We are pushing for further reduction of violence. Everything is a process. We are right in the middle of it, and whether or not this process will ultimately succeed, history will judge.

DER SPIEGEL: There are rumors about secret annexes in the U.S. treaty with the Taliban that allegedly grant the Taliban a say in the whereabouts of military bases and reconnaissance equipment once a unity government has been formed. Is that so?

Khalilzad: There are no secret annexes. There is a classified document that deals with the implementation of the withdrawal, for example the order in which the U.S. bases will close. A second document, which is also not public, deals with the implementation of the Taliban’s commitment on counterterrorism and how they will be measured. U.S. Secretary of State Mike Pompeo has agreed to share all documents with Congress. President Ashraf Ghani and Dr. Abdullah have also reviewed all the documents, in three languages.

DER SPIEGEL: Will U.S. troops end up staying in Afghanistan or not?

Khalilzad: We committed to implementing our agreement on a phased and condition-based withdrawal of our forces.

DER SPIEGEL: Aside from those in Afghanistan, the U.S. hardly has any other military bases in the region. The country is in direct proximity to China, but also to Russia, Iran and the nuclear power of Pakistan. What strategic interests will the U.S. be pursuing here in the future?

Khalilzad: The Afghans regard their country as the heart of Asia, they are proud of that and therefore they believe that no one will ever leave this irreplaceable piece of earth voluntarily. I understand this very well because I grew up here. But if we can be sure that the United States and our allies are not threatened from Afghan territory and the Afghan government decides they do not want us here, then we are not demanding to stay and we are ready to withdraw our forces as agreed in the U.S.-Taliban agreement.

DER SPIEGEL: Is the U.S. in a hurry to withdraw?

Khalilzad: We are in a hurry to achieve peace so the killing of Afghans can stop and for Afghanistan not to present a threat to the international community. We also want to leave a good legacy in Afghanistan. We want to have good relations with Afghanistan. We want a lasting relationship. Afghanistan has benefited from the efforts and sacrifices we, and so many Afghans, have made. It is a different country, and in many ways better than it was. And the government, but also the Taliban, say they also want a good long-term relationship with the United States.

DER SPIEGEL: Many Afghans fear that they will soon be dominated by the Taliban again and feel abandoned by the United States.

Khalilzad: First of all, we have not left. When we signed the agreement with the Taliban, we reaffirmed, together with the NATO secretary general, that we would honor all of our commitments to Afghanistan. Secondly, we will not only defend the Afghan armed forces currently in combat, but will continue to support the Afghan security forces.

Khalilzad: We have spent 18 years at war with the Taliban and the country has been at war for 40 years. All parties believe there is no military solution and now we are seeking to facilitate a political settlement.

DER SPIEGEL: Have the Taliban really changed? In places where they have returned, they are just as brutal and medieval as they were in the 1990s.

Khalilzad: The Taliban are making commitments they refused to make in the past. In 2001, they refused to break with al-Qaida. Now they have written in black and white that they will not allow the presence of al-Qaida, ISIS, or any other group that could threaten the United States or any other country. Their commitment means not allowing these organizations to recruit, fundraise, to host them, or to (allow them to) travel through their territory. In the past, they said they would not sit down with the government. Now they say that they will sit down with a delegation from the Afghan government. They say that they want Afghanistan to have good relations with the United States, with the world, and they want to be accepted as a legitimate partner.

DER SPIEGEL: Will this new Afghanistan be a democracy with an elected parliament, or will it become an Islamic emirate?

"Of course, I would have liked to have seen more progress on the political process."

Khalilzad: That question is not part of our agreement with the Taliban. But we have told them clearly that this is a red line for the Europeans and other allies, and that we would not accept a return to the 1990s with its support of terrible practices. The Taliban cannot count on U.S. or European assistance if they do not respect fundamental internationally recognized rights and human rights. If they do not respect those standards, we will not support them. They would not be accepted as legitimate actors in Afghanistan.

DER SPIEGEL: You are married to a committed feminist and came to Kabul many years ago as ambassador to build a modern country. How frustrated were you when you ended up having to negotiate with the radical Islamist Taliban after all?

Khalilzad: Of course, I would have liked to have seen more progress on the political process. But Afghanistan has also made a lot of strides. I am hopeful a successful peace process will improve the future of this country, politically, economically and socially.

DER SPIEGEL: What does that mean in practice?

Khalilzad: It is perfectly legitimate for certain groups to want the "X" system, and for another group to want the "Y" system. But it must be a system that allows the coexistence of both groups. Violence cannot be the arbiter of political disagreement. 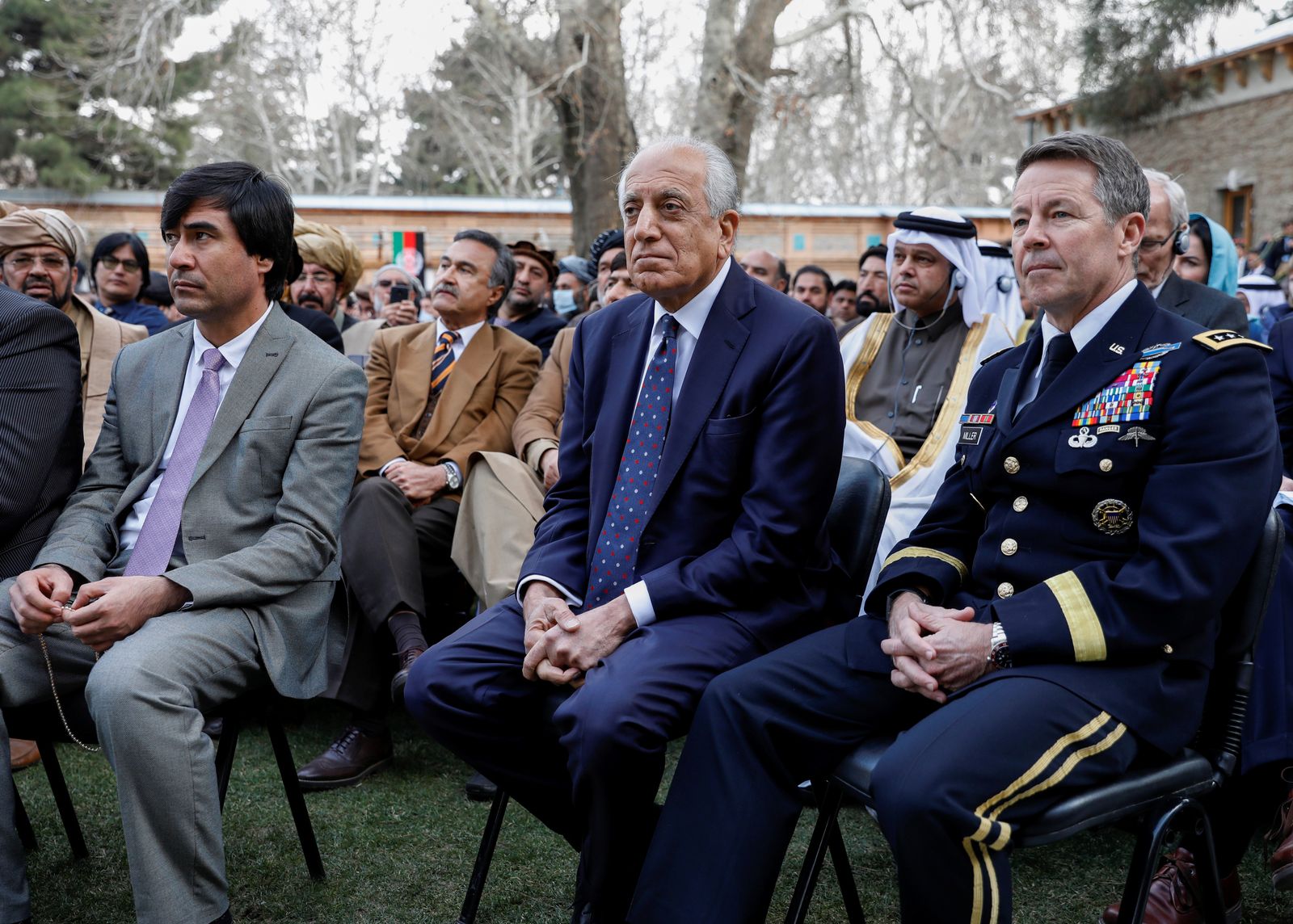 U.S. Special Representative Zalmay Khalilzad on March 9 in Kabul at the inauguration of President Ghani.