Clemens Tönnies usually says what he thinks. When, on a February morning, he climbed into a private jet with his wife Margit to fly to the Olympic Games in Sochi, he described his views on Russia to a reporter with Sport Bild magazine: It has "bothered him, how negatively this country has been portrayed."

Tönnies, a meat factory owner from Rheda, Germany, likes to spend a lot of time surrounded by Russian friends and partners -- and his three-day stay at the Olympics was no exception. There, he met multibillionaire Oleg Deripaska in his skybox at an ice hockey game, and was invited to a mountain hotel by Sberbank head and former Russian Economics and Trade Minister German Gref.

Although he wasn't able to meet with Russian President Vladimir Putin and Gazprom Chef Alexey Miller during his Russian sojourn, he did receive phone calls from the head of a German-Russian gas pipeline consortium and former Chancellor Gerhard Schröder and met with Marcus Höfl, the husband of German ski star Maria Höfl-Riesch and the long-time manager of Franz Beckenbauer. The president emeritus of the Bayern Munich Football Club is part of the network of Russia supporters -- he promotes sporting events in Russia and is paid for it by the Russian Gas Society.

But in the past few days, Tönnies has become noticeably quieter about his support of Russia. The likely reason: He had candidly told the Handelsblatt business newspaper in an interview that the Russian president had invited the players of FC Schalke 04, a traditional football club, to the Kremlin. Tönnies is the chairman of the club's supervisory board, which also has Russian state company Gazprom as its main sponsor. "We are sports people, and not global politicians," he said in response to critics of his travel plans in the midst of the Crimean crisis. This, in turn, created a storm of outrage, especially in the political world.

"To accept an invitation to the Kremlin in the current situation and allow oneself to be instrumentalized in this manner doesn't really show any tact," declared Peter Tauber, the general secretary of the conservative Christian Democrats. Others spoke of a "minion's visit to an autocrat," and argued that Tönnies has put the club in "the service of Putin's political propaganda." The fact that the interview was conducted in early April, and that the invitation was given in the fall and had been known about for a while, seemed irrelevant. Just one day after the publication of the interview, Tönnies announced that there were no current or future plans for a trip.

Given the ways business-world figures and politicians have been audibly grumbling at each other for weeks whenever the issue of how to deal with Russia in regards to the escalation in the Ukraine arises, the hubbub isn't exactly surprising.

On March 21, the EU heads of state and government declared that all Russian steps aiming to further destabilize Ukraine would "lead to additional and far-reaching consequences" -- meaning strict economic sanctions. But Russia has ignored agreements and arrangements and, thus far, not much has happened in terms of consequences -- creating a dilemma for both politicians and businesspeople.

Although all sides argue that international law is more important than profits, politicians appear to be having a difficult time agreeing to far-reaching and painful sanctions, given Europe's energy dependence on Russia. The business community, it's also clear, has no interest in such punitive measures.

At the East Forum in Berlin in April, Eckhard Cordes, chairman of the Committee on Eastern European Economic Relations, an organization representing German business interests in the east, received applause for one sentence in particular. "We won't let the constructive work of the last decades be ruined for us," he said in reference to the threatened sanctions, and called for politicians to solve the crisis at the negotiating table as quickly as possible.

Cordes seems to be voicing the feelings of many German businesspeople. Germany, after all, has noticeably closer connections to Russia than other European countries -- last year's trade volume was €76.5 billion ($106 billion), and Germany is Moscow's third-largest trading partner. The Germans export machinery, electrical equipment and cars to Russia, and import gas and oil in return. There are 6,000 German companies in Moscow -- more than all those from all the other EU states combined. The Russian market, as difficult as it may be, is giant and lucrative.

In the current political situation, finding the path forward is a high-wire act -- a fact that nobody understands better than businesspeople whose companies have been involved in the farthese reaches of Eastern Europe for several years.

Joe Kaeser was the first to discover how easily carefully crafted bonds can be ripped apart. In late March, the head of German multinational engineering giant Siemens met not only with Putin, but also with the head of the Russian national railway, Vladimir Yakunin, who is on the American sanctions list. After Kaeser commended his "trusted relationship" to Russian businesses, it didn't take long for him to be heavily criticized back at home for only caring "about money." Rüdiger Grube, the head of Deutsche Bahn, the German national railroad, decided to cancel his planned trip to Russia for the time being.

As comprehensible as these reactions may be, isn't it also understandable that businesses try to represent their own interests, even during politically difficult times? And can't that be a legitimate way of doing things -- at least until politicians build a clear framework of sanctions or other measures?

The reactions do seem a little sanctimonious. Business with Russia has never been simple, and definitely never unpolitical. Even before the beginnings of the current conflict, the Russian government wasn't known for its implementation of democracy and civil rights. Up until now, the issue was silently tolerated, because both sides were making profits.

But the relationship has been ambivalent all along. There's no better example of this than Gazprom, the largest gas company in the world, half of which belongs to the Russian state. Gazprom is often used by the state to exert pressure in international crises. The company owns television stations and newspapers and feeds Russia's coffers with its profits. And not only the Russians'. If you consider the profits Gazprom provides to German businesses, the outrage over Schalke's football players' €15 million-per-season sponsorship is almost pathetic.

The biggest profiteer and most zealous ally in political and economic conflicts is the German chemical giant BASF, or, more specifically, its Wintershallsubsidiary. The company does billions of euros in business in Russia, and has ownership shares in giant Russian gas fields. In return, the company has provided Gazprom with access to the German gas network and storage facilities.

It wasn't until a rapidly called press conference last Thursday that Wintershall head Rainer Seele positioned himself as an advocate of the Russian energy multinational. He then let loose statements like: "The Russians are dependable allies," "embargoes don't do anything for anyone" and "we shouldn't frivolously be putting years of built-up trust in jeopardy."

At this point, Wintershall can do little without the Russians. In 2012, BASF allowed Gazprom to acquire its biggest gas subsidiary, Wingas. As a result, the Russians received not only the access to millions of German consumers they desired, they now control a large part of the German gas network and of the enormous natural gas storage facilities.

In return, BASF became one of the few foreign companies with direct holdings in the giant Russian gas fields in Siberia. For the chemical concern, this represents billions of euros in business -- and the chance to become part one of the world's largest gas producers. No surprise, then, that Seele doesn't have any problem speaking up for Russian interests to the German government, at the European Union level and in public.

Wintershall isn't alone. German energy supplier E.on has also profited from years of business with the Russian state company. As a result, E.on subsidiary Ruhrgas has made many billions of euros in profits. The idea was simple: The Russians would deliver the gas to the German border for a price pegged to oil. Given its position as Europe's biggest gas trader, Ruhrgas then added on a lavish distribution tariff.

E.on even had a percentage of shares in Gazprom, could make purchases in Russian gas fields and build refineries. E.on invested approximately €6 billion in facilities. Now it worries about its high investments because of the crisis.

These days, the relationship between the two companies is no longer as intimate. At one point, Gazprom head Miller demanded access to E.on's end customers and insisted on being able to purchase majority holdings in E-on's largest regional subsidiaries. Then E.on head Wulf Bernotat refused. Since then, E.on has no longer been a core favorite of the German companies with which the Russians like to do business. They instead directed their attentions to BASF subsidiary Wintershall, which had far less opposition to this kind of involvement.

'I Have Promised Putin'

Given this type of economic interdependence, the accusations leveled against meat manufacturer and the head of Schalke's supervisory board Tönnies -- namely that he wants to expedite the construction of a meat plant in Russia by having his football players visit the Kremlin -- seem almost naïve. As it turns out, Tönnies' Russian business is considerably larger than previously known. Tönnies grossed almost €6 billion in the past year. Fifty percent of that came from exports -- of which Russia, being one of the biggest markets for pork, made up 10 percent.

Tönnies has also, it turns out, long been personally involved in Russia, where he already has eight feeding facilities for pigs, and three others under construction. He wants to be able to feed, slaughter and butcher up 1.5 million animals per year. This, Tönnies admits outright, is a fulfilment of Putin's wishes. "I have promised Putin that I would also become active in Russia."

Russia is dependent on businesses like Tönnies'. The country has an enormous need for food products, which it can barely fulfill on its own. The same is true for all other branches in which German companies are investing there: The giant country not only requires goods, but also a transfer of technology, investment capital and jobs.

It wasn't until last Friday that the US ratings agency Standard & Poor's lowered Russia's creditworthiness rating to BBB-, only one notch above the term "junk" intended to indentify speculative investments. The ratings agency justified its decision by pointing to the massive crisis-induced capital drain in the first three months of the year.

German exports also decreased by 10 percent in January and February in comparison to the previous year. Because of the weak price of the ruble, many Russian state companies have switched to Asian suppliers. Putin simultaneously raised the pressure by allowing Gazprom to suddenly bring Ukraine to account over $11.4 billion in broken gas contracts.

All of this shows how difficult it is to determine who has the upper hand when it comes to business in and with Russia. At any rate: It's become much more complicated for the German business community to find its way through the network of political pressures, interwoven economic relationships and public opinion, while balancing its own interests. Tönnies will have learned that by now. 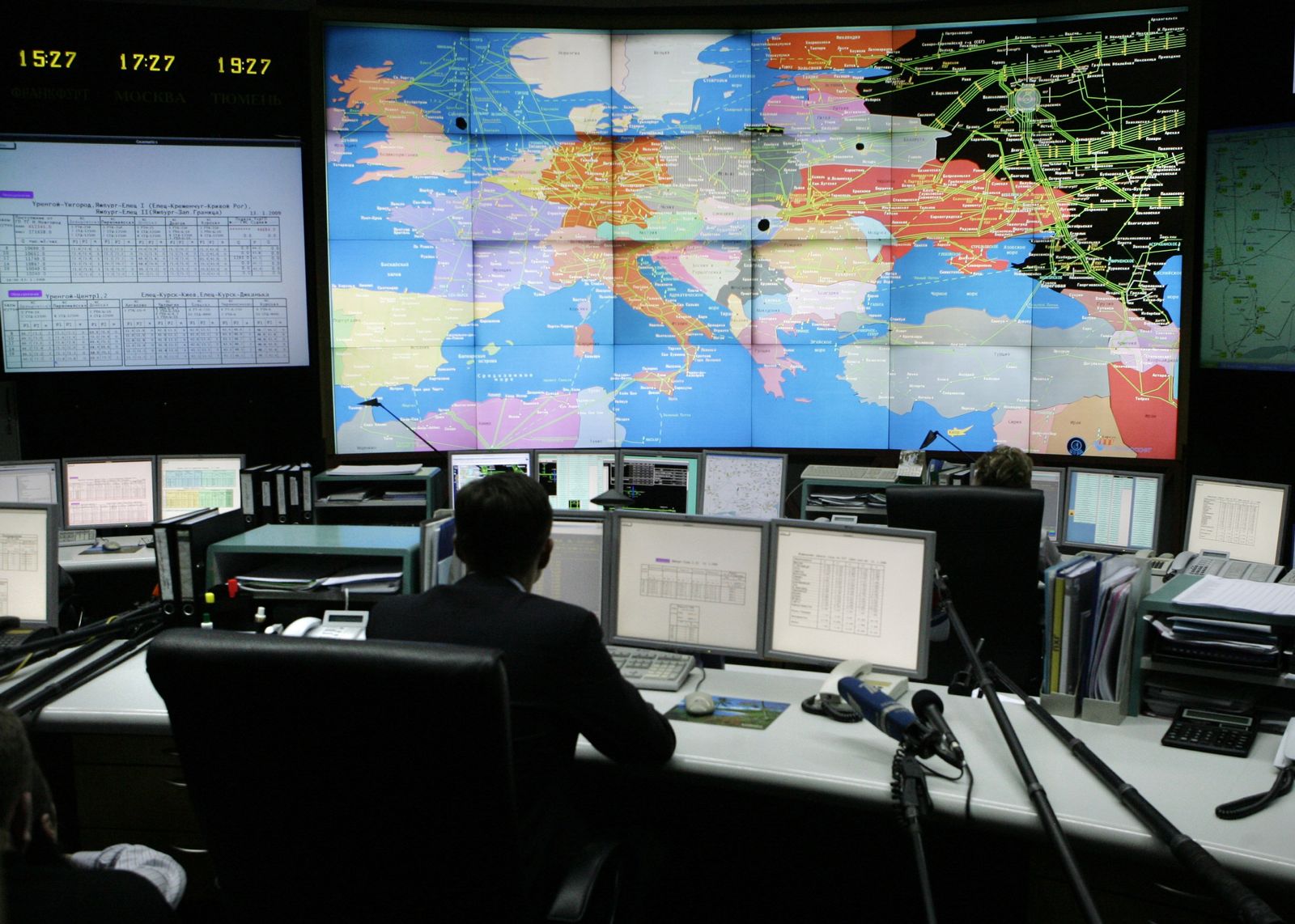 A Gazprom employee is seen in the Russian company's main control room in Moscow. 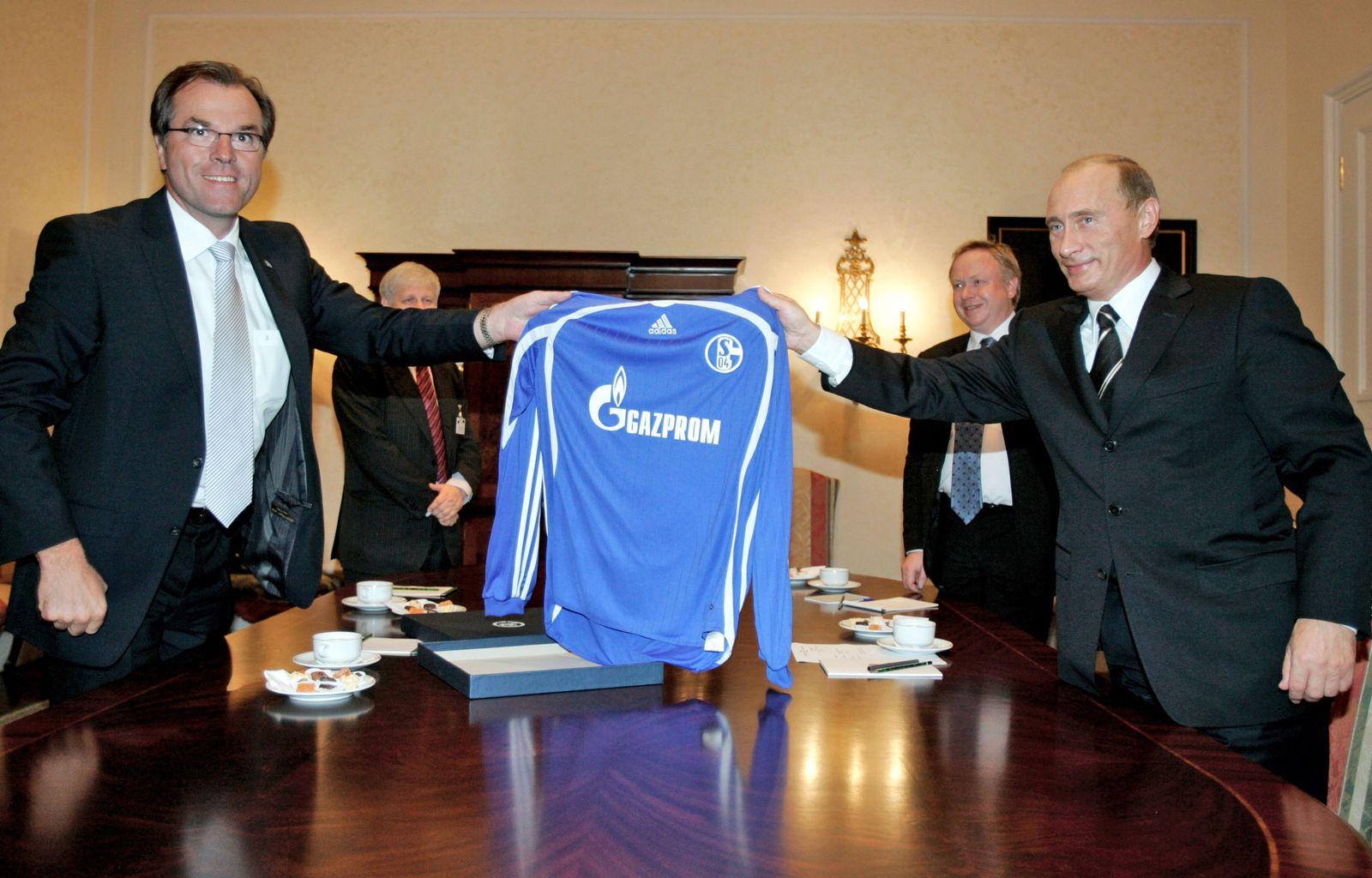 Meat-factory owner Clemens Tönnies in an archive photo with Vladimir Putin in Dresden in 2006.