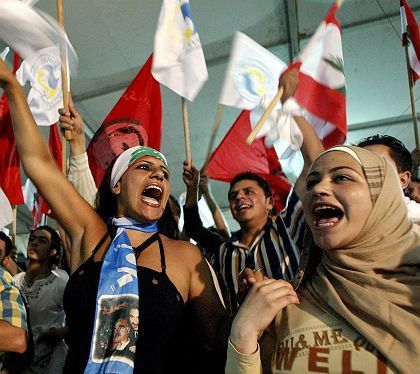 Lebanese government supporters celebrate after hearing that the UN Security Council voted to set up a tribunal into the murder of former PM Rafik Hariri.

The United Nations Security Council has voted to set up a tribunal to look into the 2005 murder of the former Lebanese premier, Rafik Hariri. But while the pro-Western government welcomes the move, pro-Syrian voices say the tribunal could further destablize the country.

The Security Council voted on Wednesday to unilaterally establish an international tribunal to investigate Hariri's assassination. Five members of the 15-member body abstained during the vote, including veto powers Russia and China. The tribunal needed at least nine votes in favor to go ahead.

The resolution stipulates that a 2006 agreement between the UN and Lebanon on the creation of a tribunal will automatically come into effect on June 10, if the conflicting parties in Lebanon do not agree to set up their own tribunal.

The five countries that abstained objected to establishing it without the Lebanese parliament's approval and to putting the resolution under Chapter 7 of the UN Charter, which deals with threats to international peace and allows for military enforcement.

Syria has fiercely criticized the UN decision, arguing that the tribunal undermines Lebanon's sovereignty and threatens to further destabilize the country. And Syrian President Bashar Assad has already indicated that he will not cooperate with the investigation if it infringes on Syrian soverignity. After Wednesday's vote Syria's UN ambassador Bashar Ja'afari said: "This is something that goes against the interests of the Lebanese people and Lebanon as a whole."

Hariri, a prominent critic of Syria's involvement in Lebanon, was killed by a suicide bomb attack in Beirut on Feb. 14, 2005, along with 22 other people. The huge protests in the aftermath of the killing forced Syria to end a decades-long military presence in the country. The intial investigation into the assassination, carried out by Germany's Detlev Mehlis, pointed to the involvement of Syrian and Lebanese intelligence agents. Four pro-Syrian Lebanese generals have been under arrest for 20 months in connection with the crime.

The issue of the tribunal has sharply polarized opinion in Lebanon, often along sectarian lines. Prime Minister Fuad Saniora, who leads a Western-backed government, had asked the Security Council earlier this month to establish the tribunal, after the parliamentary speaker, Nabih Berri, refused to convene a session so that the parliament could ratify the tribunal. Berri, a leading member of the pro-Syrian opposition, said Thursday that the Security Council is ignoring the need for a Lebanese consensus on the issue. "You have picked internationalization instead of the state," he said in a brief statement.

The parliament in Beirut still has a chance to set up a tribunal under its own steam. But if it does not act by June 10, then an international tribunal will created outside the country.

Saniora said that the tribunal would finally be able to uncover the truth about the Hariri murder. Supporters of the slain politician danced in the streets on Wednesday night after hearing news of the UN decision. His son Saad Hariri, who now leads the anti-Syrian coalition which controls the government, said the resolution was a turning point in Lebanon, which would protect the country from further assassinations. He called it a "victory the world has given to oppressed Lebanon."