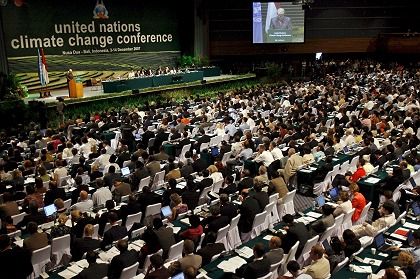 Representatives of over 180 countries are meeting in Bali to begin drafting a successor deal to the Kyoto Protocol.

Representatives from the world's leading governments began Monday to unveil the potentially conflicting agendas they will seek to advance during an international climate change conference in Bali, Indonesia.

Leaders from the European Union kicked off the UN-led conference Monday by declaring that they will seek ambitious international emissions reduction targets of 50 percent below 1990 levels by 2050.

"It would be sensible, to give direction to the negotiation process, but we have to see how far we get," said Arthur Runge-Metzger, leader of the European delegation.

EU member states have already committed to reducing emissions by 20 percent by 2020, and a spokeswoman for the European Commission told SPIEGEL ONLINE last week that they would seek a 30-percent international decrease in the new contract.

Officials from over 180 nations have gathered in Bali to start drafting a new international treaty to govern greenhouse gas emission reductions.

There was good news for environmentalists already on the first day of the conference, as newly-elected Australian Prime Minister Kevin Rudd signed the Kyoto Protocol. Australia is now the 37th country to make a binding commitment to reduce emissions to 5 percent below 1990 levels by 2012. Rudd's decision to ratify the treaty reverses the position of his conservative predecessor, John Howard, who refused to sign the pact.

"I think I can speak for all present here by expressing a sigh of relief," said conference host and Indonesian Environment Minister Rachmat Witoelar during the conference's opening session.

Australia's decision to ratify the Kyoto Protocol isolates the United States as the only developed nation that has not signed the treaty. The leader of the US delegation in Bali, Harlan Watson, said the US would respect Australia's reversal and stressed that their goal in Bali was not to sidetrack the negotiation of a new treaty.

President George W. Bush rejected the pact in 2001, saying that it would hinder the US economy and that it unfairly excused some of the world's largest polluters, like the developing economies of China and India.

Watson said Monday that the US would openly discuss the possibility of a new international emissions reduction treaty, but that any binding commitments would need to cover those major developing economies as well. Leaders in China and India have said in the past that it is unfair to impose emissions restrictions on their rapidly growing economies as they attempt to lift hundreds of millions of their citizens out of poverty.

The conference in Bali, which runs until Dec. 14, is the first meeting to establish a successor to the Kyoto Protocol, which expires after its commitment period ends in 2012. While broad issues will be discussed at the conference, concrete expectations are modest.

UN officials hope that delegates will set 2009 as the deadline by which a new treaty must be drafted, which they believe would leave enough time for it to be ratified and enacted in 2012. That would leave no gap between the parameters of the Kyoto Protocol and the requirements of a new treaty.