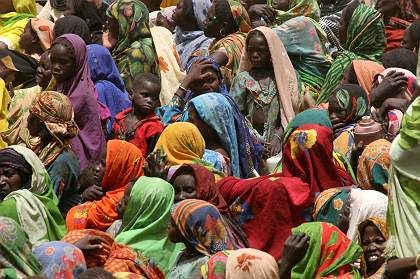 These refugees in Chad are escaping violence in Darfur. But the displaced of the future may be running from the climate.

Once upon a time, a warming climate tempted the Romans into northern Europe -- as far as northern Germany and even into Britain. Hundreds of years later cooling weather drove Germanic tribes from Scandinavia into the south. Vikings settled Greenland after it warmed up, only to leave when it froze again.

Climate, in short, has long triggered mass migration. And the UN's Intergovernmental Panel on Climate Change (IPCC) warns that more may be on the horizon. The second part of its extensive report on global warming, released on Friday, warns that coming climate-related disasters may kick off a worldwide exodus of Biblical proportions. Indeed, according to the International Red Cross, 25 million people have already started to shift from places blighted by environmental problems -- a figure that would top the current number of war refugees across the globe.

Rich industrial nations, after decades of pouring more greenhouse gases into the atmosphere than poor countries, can adjust to the changes if they invest enough money; but the poorest parts of Central America, Asia and Africa will suffer harshly from flooding and drought. This conventional wisdom in the climate controversy has opened a human-rights debate: Now it's not just globalization, closed markets, or the consequences of colonialism that have robbed the poor of their opportunities -- it's also greenhouse gases. Will coming decades see millions of "climate refugees" flowing north from the floodplains and deserts of Africa or Latin America?

This question is still wide open among scientists. Experts can't agree if climate refugees even exist. Oxford-based ecologist Norman Myers argues they do, and says the number could soar to as high as 200 million within 50 years. "These people see no alternative to seeking asylum elsewhere, as hazardous as the attempt (to get there) might be," he says.

His colleague Stephen Castles, at Oxford's International Migration Institute, contradicts these horror-movie scenarios. "Myers and others simply take the climate predictions at face value and look at how many people live in the areas that will be flooded," says the author of "The Age of Migration," a now-standard text. This method, says Castles, leads to exaggerated refugee estimates.

He says it's more accurate to research how people actually respond in a given area to environmental disaster, war, or widespread poverty. "What we see is something else -- immigration is generally not the main strategy." When living conditions do get unbearable, people also tend to move within their own countries -- only rarely do they cross national borders.

Immigration experts in countries like Bangladesh tend to agree. Along with low-lying islands like the Maldives, Bangladesh is an early indicator of climate-change prophecies, and even there, sea levels aren't rising all at once. Parts of the country can be protected with dikes; other parts may have to be abandoned, but the people can be resettled. "Only a few will really flee to India," says Castles.

The crucial issue is how well governments react to disasters. After the 1995 earthquake in Kobe, Japan, most of the 300,000 displaced residents returned a few months later. After the Pinatubo volcano erupted in the Philippines, though, a large-scale return took years. But the capacity of a nation to respond isn't just a matter of money, as the US government's desultory response to Hurricane Katrina showed in 2005. "It has more to do with decisiveness and organization, and with the struggle against corruption and mismanagement" within a government, says Castles. Overly dramatic predictions of mass migration, he says, mainly serve to aggravate xenophobia: "Right now a tide of refugees is already lapping against the EU's shores," he points out.

Land reform against the apocalypse?

Thomas Faist, a sociologist at the University of Bielefeld, also resists the shrill language his colleagues have started to use. "I don't want to deny the problem," the professor says. "But we can't lose sight of the fact that there are other far more decisive reasons for people to leave home." Floods and desertification are happening now; at the same time people are going hungry and trying to flee. But Faist argues that their ultimate reasons for leaving boil down to ethnic conflict, or economic as well as political mismanagement. He thinks climate change is just an exacerbating factor. Anyone who wants to stop a stream of immigrants has to address its underlying cause, and he doubts the climate can be cited as a root cause for all conflicts raging through all the poor parts of the world.

Faist therefore believes that pots of emergency-fund or "just in case" money for the countries most affected by climate change will be useless. "What they need from us is technological help, drought-resistant seeds, and political support to help the governments react," he says. "Climate change should not be exploited as a cause, to relieve developing nations of their own responsibilities."

The difference between good and bad political management can be seen in Turkey. In the west, where land reform has been underway for decades, the farming sector has flourished; people can support themselves and export their products. In eastern Turkey, where most farmland still belongs to a handful of huge landlords, productivity is low, poverty is high, and many people are leaving for the cities.

"Western Turkey," says Faist, "is in better shape to deal with climate change."