The rocket, or at least part of it, was still there at its site of impact. It was 63 centimeters long and bore Cyrillic writing on its side. It was found on the backyard terrace of an apartment building in Moadamiyah, a suburb of Damascus. Similar debris was found on the roof of a house and in the floors below. United Nations inspectors also discovered pieces in an open field, including the remnants of a warhead that had an "approx. capacity of liquid" of "56 +/- 6 liters."

The liquid in question was sarin. The poison gas was found in soil samples taken from the impact sites, as well as in blood, hair and urine samples taken from residents who survived the attacks. The inspectors estimate that the total amount of sarin used in the attacks was up to 350 liters.

The report released by the UN weapons inspectors on Monday is full of minutely documented details on what they found during their investigation into the massacre that activists and the United States say killed more than 1,400 people on the outskirts of Damascus on Aug. 21. The 38-page report, presented "with a heavy heart" to the Security Council by UN General Secretary Ban Ki-moon in New York on Monday, confirms "unequivocally and objectively" that significant quantities of chemical weapons were deployed against Syrian civilians.

It is an assessment that the world had long been waiting for. It solidifies the foundation of the agreement recently reached between the US and Russia to eliminate Syria's stockpiles of chemical weapons. And it will provide new impetus to the negotiations aimed at the formulation of a UN Security Council resolution to address the use of chemical weapons in the country.

"The results are overwhelming and indisputable," Ban told the Security Council. "The facts speak for themselves." He said it was the worst poison gas attack since Iraqi despot Saddam Hussein deployed chemical weapons against his country's Kurdish population in 1988. "This is a war crime and a grave violation of international law," Ban said, adding that those responsible must be brought to justice.

The report, which was forwarded to all United Nations member states, does not attribute responsibility for the attacks. Determining guilt was not part of the inspectors' mission. But the details allow little doubt that the regime of Syrian President Bashar Assad is responsible -- a suspicion that the Russian government had long rejected.

"The technical details of the UN report make clear that only the regime could have carried out this large-scale chemical weapons attack," said Samantha Power, the US ambassador to the UN. She noted the "professionally made" rockets that were used in the attack -- rockets of the kind used by the Syrian regime.

She was seconded by Mark Lyall Grant, the British ambassador to the UN, who said that the report left "no doubt that it was the regime that used chemical weapons." French UN Ambassador Alexis Lamek reached the same conclusion.

Russia, however, has shied away from drawing such conclusions. Over the weekend, Moscow government sources told SPIEGEL ONLINE that Russia had evidence suggesting that Assad himself did not issue orders for a poison gas attack -- and that the evidence implicates the rebels instead.

The report itself sidesteps the question of guilt. It notes that the rockets in the Moadamiyah attack came from the northwest. In reference to that impact site, as well as the one in Ein Tarma, the report notes that there is "sufficient evidence to determine, with a sufficient degree of accuracy, the likely trajectory of the projectiles." The coordinates mentioned in the report are consistent with research undertaken by Human Rights Watch, which indicates that the rockets were fired from areas controlled by government troops.

The inspectors, under the leadership of Swedish arms expert Ake Sellström, spent a total of four days at the target sites. The mission was "complex and highly delicate," the inspectors noted, adding that they had a cease-fire window of only five hours each day.

Still, they were able to interview more than 50 survivors and witnesses, including patients and medical personnel. They documented where they found munitions, tested the water and soil, took blood, hair and urine samples from survivors and diagnosed symptoms.

The evidence that sarin was used is "clear and convincing," they write. "Survivors reported that following an attack with shelling, they quickly experienced a range of symptoms, including shortness of breath, disorientation, eye irritation, blurred vision, nausea, vomiting and general weakness." Many of the victims, the report notes, had no "external signs of injury."

The weather made the situation even worse. Due to falling temperatures, the air was moving downward at the time of the attack, helping the gas to find its way into basements and the lower floors of buildings where people were taking shelter.

First responders also became ill, with one of them describing "the onset of blurred vision, generalized weakness, shaking, a sensation of impending doom, followed by fainting," according to the report.

UN inspectors examined 36 survivors between the ages of seven and 68, finding traces of sarin in 85 percent of their blood samples and 91 percent of their urine samples. They also reported that "the presence of sarin, its degradation and/or production by-products were observed in the majority of the environmental samples," of which 30 were "taken from impact sites and surrounding areas."

Lyall Grant, the UK's permanent representative to the UN, says that the total amount could reach up to 350 liters (92 gallons), or 35 times the amount that terrorists released during an attack in the Tokyo subway system in 1995, which killed 13 people. Power, the US envoy, also reported in response to a Russian inquiry that UN team leader Sellström had stated the sarin was of a higher quality than that which Saddam Hussein used in 1988.

The report's publication did not go off without a hitch. The first slip-up came last Friday while Ban Ki-moon was making what he thought was a "private" speech to the Women's International Forum in New York. There, he revealed the tenor of the report, saying that it contained "overwhelming" proof that there had been an attack using poisonous gas. News of his comment quickly spread all the way to Geneva, where US Secretary of State John Kerry and his Russian counterpart, Sergei Lavrov, had reached an impasse. According to the Washington Post, the Russians only backed off their tough stance after Kerry brought up Ban's comment.

Then, on the weekend, the UN released a photograph of the moment when Sellström officially presented the still-secret report to Ban. The image showed the first page of the report, which is legible with a little effort.

The next thing the Security Council will do is discuss a possible resolution that anchors the agreement made in Geneva. But these talks could take some time. The annual UN General Assembly meeting will be held in New York next week, drawing dozens of leaders from around the world, including US President Barack Obama, Russian President Vladimir Putin, French President François Hollande and British Prime Minister David Cameron. Separate meetings to address the Syria issue are to be held on the sidelines of the larger meeting.

The talks will have to address disagreements on several key points. For example, should the UN resolution threaten Syria with the kind of military action that the US is demanding, but that Russia is opposed to? Should the Assad regime be brought before the International Court of Justice in The Hague? Likewise, it is still completely unclear exactly how Syria's chemical arsenal is supposed to be secured, monitored and disposed of. 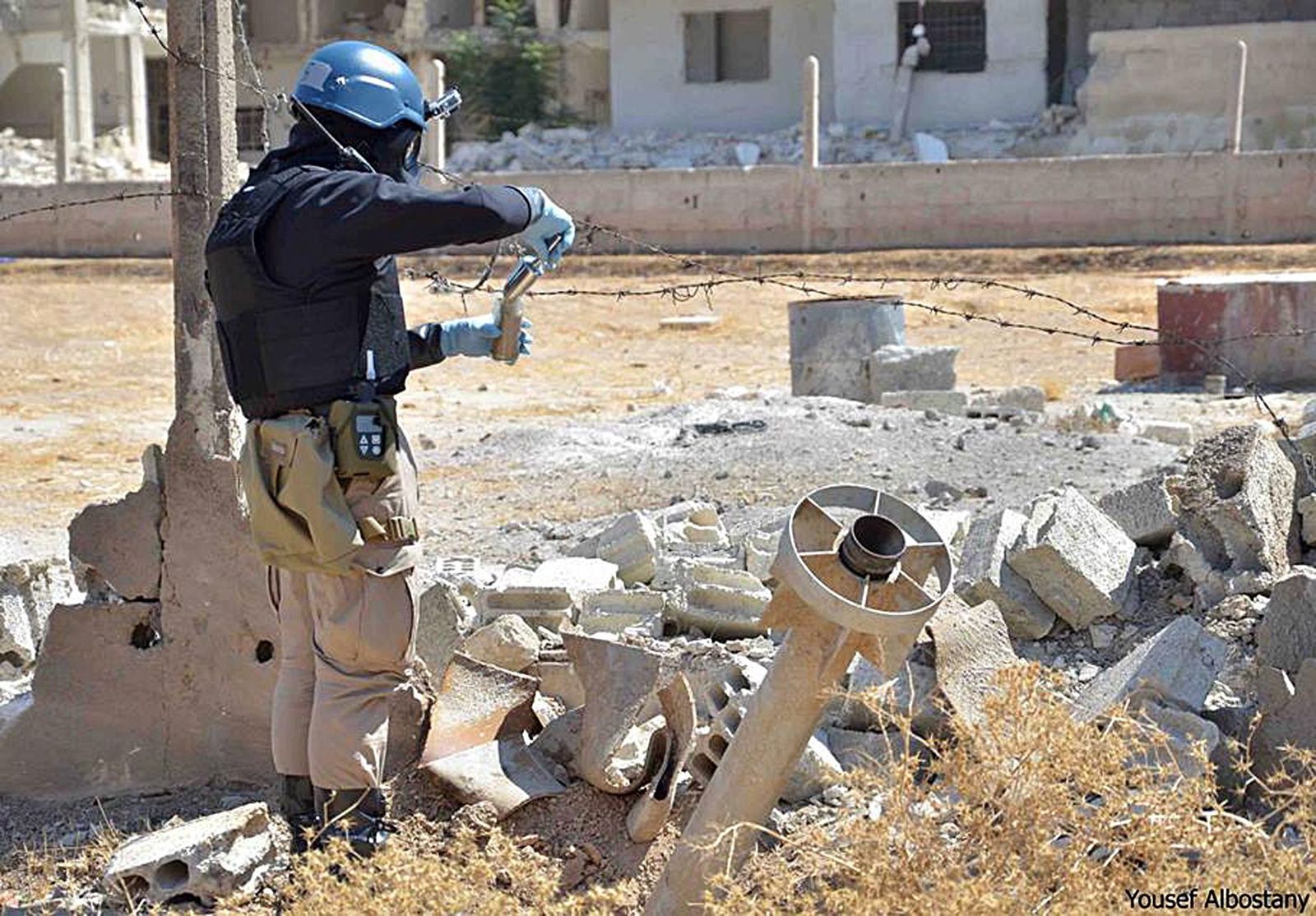 A UN weapons inspector collects samples during the team's investigations at Ain Terma, near Damscus, in late August.