Governments in many countries, particularly in Europe, have implemented radical reforms and austerity measures in an effort to combat the economic crisis. But this approach has "devastating consequences" on the job market, the International Labor Organization (ILO) warned on Monday.

Furthermore, these measures have not achieved the desired result of reduced deficits, the United Nations agency said. The "World of Work Report 2012" called the global employment situation "alarming," and urged governments to recognize that job-centered policies have a positive effect on the economy.

"The austerity and regulation strategy was expected to lead to more growth, which is not happening," director of the ILO's Institute for International Labor Studies, Raymond Torres, told the press in Geneva. "The strategy of austerity actually has been counterproductive from the point of view of its very objective of supporting confidence and supporting the reduction of budget deficits."

The report could heat up the debate about how to handle the euro crisis, which has recently focused on criticism of German Chancellor Angela Merkel for pushing tough austerity measures on heavily indebted European countries. The recent suggestionby European Central Bank President Mario Draghi to implement a "growth pact" has been met with widespread approval amid the growing austerity backlash.

Conservative French politician and European Commissioner for Internal Market and Services, Michael Barnier, told German daily Die Welt on Monday that he also supports growth measures. "It is possible to reconcile the good stewardship of public budgets with growth," he told the paper. "Thus I advocate that we prepare a European growth initiative in addition to contracts for budgetary discipline."

Focus on Austerity 'Could Lead to Another Recession'

The ILO says that even the recovery of the world economy has not helped, with unemployment on the rise around the globe. They estimate that some 202 million people will be without jobs in 2012 -- up by 6 million from the previous year. Employment won't reach levels seen before the 2008 financial crisis until 2016 at the earliest, some two years later than initially expected, the organization said. The situation could lead to unrest if austerity measures aren't combined with job creation, it added.

Unemployment has grown worldwide in the last six months, particularly in Europe, where more than two-thirds of the countries have seen an increase, according to the report. "The narrow focus of many euro-zone countries on fiscal austerity is deepening the jobs crisis and could even lead to another recession in Europe," Torres said.

He gave the example of Spain, where the deficit was reduced from 9 percent of gross-domestic product (GDP) in 2010 to 8.5 percent of GDP in 2011. The country had very little to show for its "drastic" austerity policies, he said.

Meanwhile, some 40 percent of the unemployed between the ages of 25 and 49 are "demoralized" and have been out of work for more than a year in advanced nations, the report found. Jobless rates among young adults have also increased sharply, leading to a growing risk of social unrest in Africa and the Middle East. Recent reforms have not only failed to create stable jobs, but have also exacerbated inequalities, particularly in Europe, the report found.

Only Six Economies Have Boosted Employment

"At the ILO we understand that fiscal deficits cannot remain high for long. It is important to have a medium-term fiscal consolidation strategy," Torres said. "But it is a question of pace and of content of fiscal consolidation. The pace has to be realistic." Instead of deregulating labor markets, the report suggested that countries focus on improving job quality, in addition to increasing public spending and minimum wages.

The results of collective bargaining so far this year indicate that actual wages could increase in 2012 and 2013. The ILO said the country's biggest challenge will be adjusting actual wages to productivity developments, in addition to improving conditions for atypical employment circumstances such as limited contracts, subcontracted labor, and part-time and low-paying positions.

While the ILO's assessment of Germany was relatively positive, other industrial nations like the United States and Japan came under fire for their sluggish progress. Meanwhile, the organization praised Latin America for reducing unemployment and improving job conditions in some places. Though the threat of social unrest had increased around the world, Latin America has managed to reduce this to an average levels, he report said. 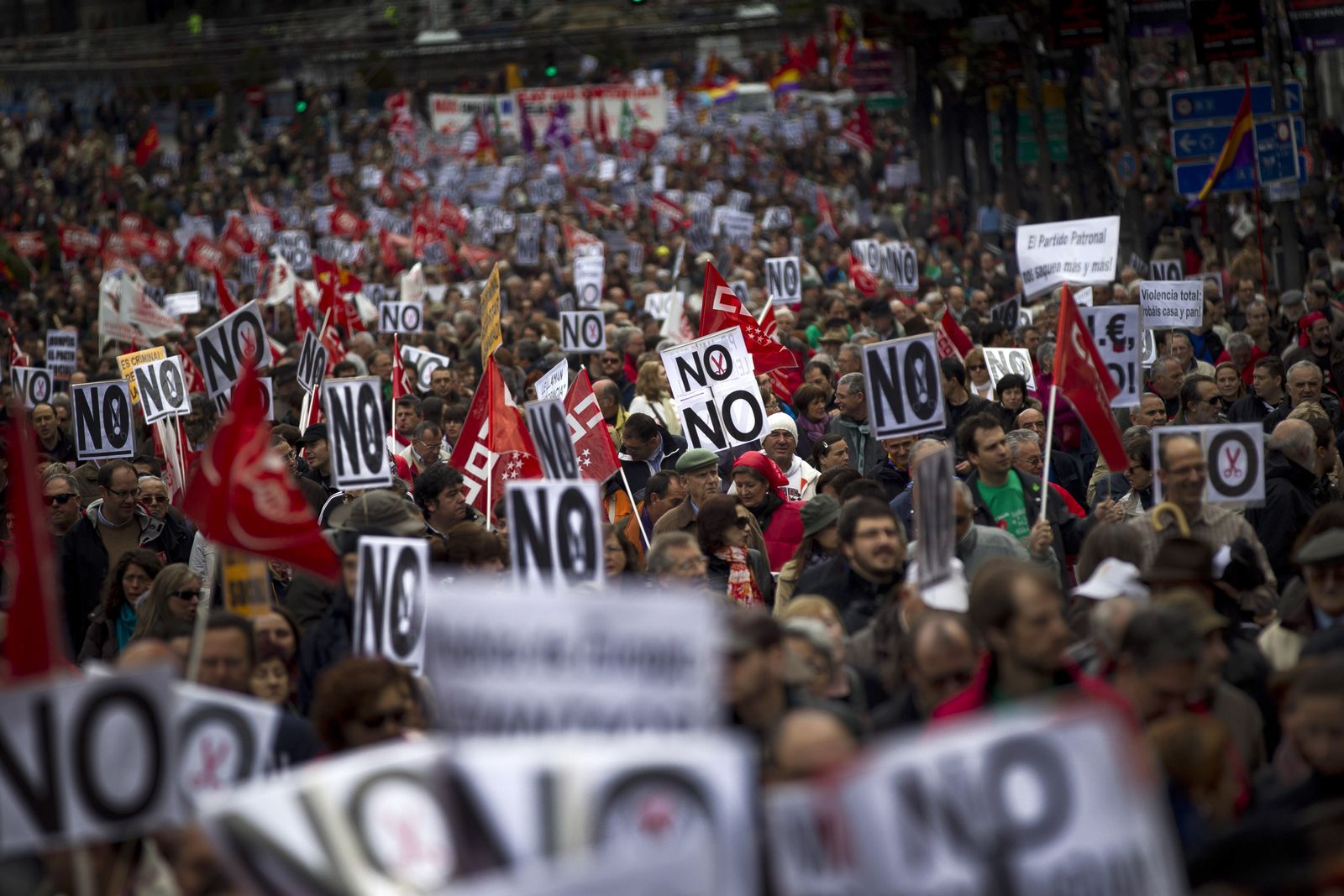 A protest of austerity measures in Madrid on April 29, 2012. The country's budgetary deficit has only been slightly reduced.