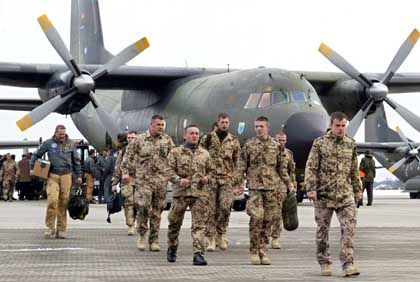 German air force members return from Sudan. The German military is stationed there to provide logistical support for peacekeeping activities. But Germany will not dispatch additional troops as part of the planned UNAMID mission in Darfur.

After nine months of negotiations, the United Nations Security Council on Tuesday finally moved to dispatch a peacekeeping force consisting of 26,000 troops to Sudan in order to stop the genocide in the Darfur region. In European capitals the question immediately arose of who would provide the troops.

In Germany on Wednesday, the responsible ministries and Chancellor Angela Merkel's office quickly agreed on a common position: The German government welcomes the Darfur mission but will be unable to provide troops.

"To the extent that transportation services will become necessary, we will take responsibility for them under our existing mandates," a government source told SPIEGEL ONLINE. "But increasing the extent of German participation or dispatching troops is practically out of the question for the federal government."

German soldiers are participating in two missions in Sudan at present. As many as 200 soldiers from the German military, the Bundeswehr, are providing logistical support under the African Union Mission in Sudan (AMIS) mandate. They are mainly responsible for transportation flights. An additional 38 German military observers are currently in Sudan under the United Nations Mission in Sudan (UNMIS) mandate. Germany's parliament, the Bundestag, recently extended both mandates. The Security Council now wants to merge the two missions into a combined operation that would be organized by the UN and the African Union.

'Our Priorities Lie in Afghanistan and Kosovo'

Thomas Steg, the deputy spokesman for the German government, explained Berlin's reticence at a press conference on Wednesday. "We have clear priorities," he said, and they lie in Afghanistan and Kosovo. "One must not overdiversify and sap one's energies when it comes to good intentions," he added. Steg said dispatching additional German troops to Sudan would be "hard to imagine."

German Foreign Minister Frank-Walter Steinmeier, visiting the Nigerian capital of Abuja on Wednesday, said: "Essentially, Africans want to take on this difficult task themselves. That is a positive development." Both Steinmeier and Merkel have said in the past that Germany would be unable to provide troops because the Bundeswehr is already overburdened with deployments in crisis regions.

Walter Kolbow, the deputy head of the Social Democratic Party's (SPD) parliamentary group and a former state secretary in the Defense Ministry in former chancellor Gerhard Schröder's government, explained to SPIEGEL ONLINE that an additional military deployment abroad would exceed the capacities of the German military. "I see no possibility of increasing the number of troops," he said in reference to Darfur.

Sudan Plans to Cooperate with UNAMID

Tuesday night's decision by the UN Security Council was unanimous. It envisions as many as 19,555 soldiers and 6,432 police forces being dispatched to the region and represents the largest UN peacekeeping force ever established. The 7,000 poorly equipped African Union peacekeeping troops currently stationed in Darfur have failed in their efforts to stop the violence so far and the new mission will replace them by Dec. 31.

Meanwhile, Arab militias continue to attack ethnic African tribes in the province with the obvious consent of the government. More than 200,000 died during the past four years, according to estimates, and there are more than 2.5 million refugees in the region.

The Sudanese government has announced it will cooperate with the new peacekeeping force. Sudanese Foreign Minister Lam Akol told the news agency Reuters that the UN resolution is "practical," adding that it takes into consideration most of the government's concerns. "We can live with it," he said.

The UN mandate gives the peacekeeping (or "blue helmet") troops permission to use violence for self-defense, in order to ensure freedom of movement for aid organizations and to defend civilians when they are under attack.

Sudan only agreed to the stationing of UN troops following tough negotiations that led Security Council members to water-down the language of the resolution. One compromise critics have singled out is the fact that peacekepping troops will not be allowed to confiscate illegal weapons. It also drops the threat of sanctions against Sudan if it doesn't accept the force.