The United States Supreme Court has spoken. The country's highest court has essentially ruled that racism is a thing of the past in America. Gone are the times when black people were hunted down and lynched, times when Congress had to provide African-Americans with legislative protection, like the Voting Rights Act of 1965, the greatest achievement of the US civil rights movement.

"Nearly 50 years later, things have changed dramatically," the court wrote in its decision on Tuesday, overturning the key provision of the historical Voting Rights Act, which had been passed in 1965 to help ensure that African-Americans were given equal voting rights in states in the South. They reasoned that "blatantly discriminatory evasions of federal decrees are rare," that "minority candidates hold office at unprecedented levels," and that the line separating the racist South from the open-minded North had disappeared.

"Our nation has made great strides," Chief Justice John Roberts, born in Buffalo, New York, wrote in the majority decision.

But has it? Certainly. The situation today is nowhere near as bad as it was during the bloody 1950s and '60s. And that's been true for a long time. Of course, this became even more evident with Barack Obama's election as president in 2008, a development many heralded as the dawning of a "post-racial" era.

A Dose of Daily Racism

The truth, however, is that the United States is still grappling with the problem of racism, with discrimination and with the long-term consequences of past slavery in the country. Racism may be less "blatant," as the Supreme Court posits, but it remains latent -- and that's what makes laws like the Voting Rights Act so important.

Here are just a few examples of the kind of everyday racism experienced in America -- and there have been quite a few lately.

Should these examples be considered exceptions or simple anecdotes? By no means. Discrimination still remains deeply and systemically ingrained in US society. And that fact is revealed in the data.

Progress has come slowly, but the Voting Rights Act was a monumental leap forward. Nevertheless, it still didn't stop local politicians from using every trick in the book to curb the voting rights of African-Americans. They have been purged from registered voter lists, opening hours have been shortened at polling stations, the number of places where one could vote were sharply reduced in some voting districts, and there were mandatory voter ID requirements.

"Voting discrimination still exists," a "deeply disappointed" Obama warned on Tuesday. The Supreme Court's ruling could now give leeway for this type of chicanery. Republicans in Texas have already announced they will try to quickly push through a draconian mandatory ID law that would disproportionately impact the poor and minorities.

Protective laws remain indispensable in the United States, even if the principle of Affirmative Action is slowly starting to appear passé. Even in modern America, it will be some time before racism truly becomes a thing of the past. 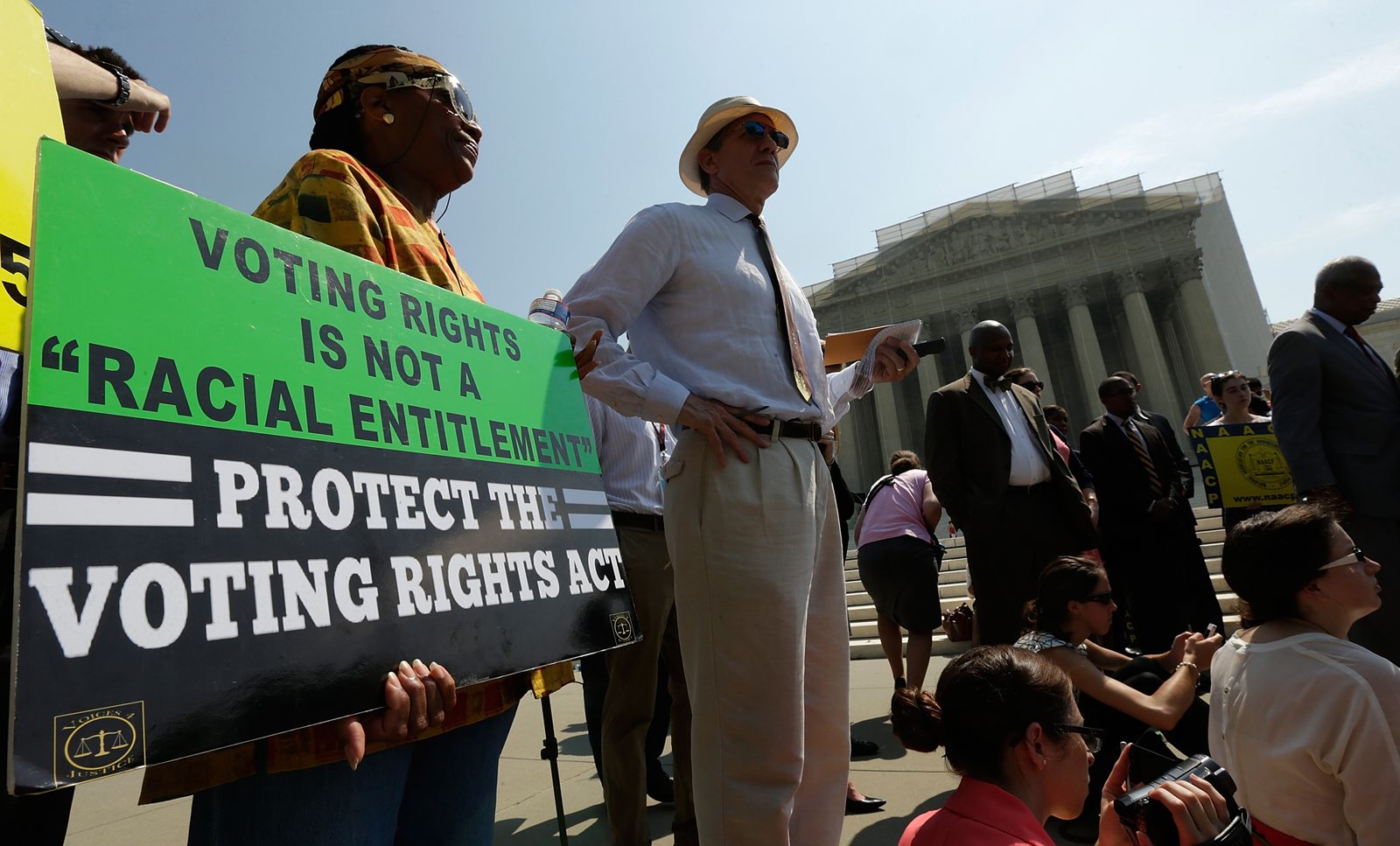 A protest in front of the Supreme Court in Washington: This week's verdict doesn't reflect reality.