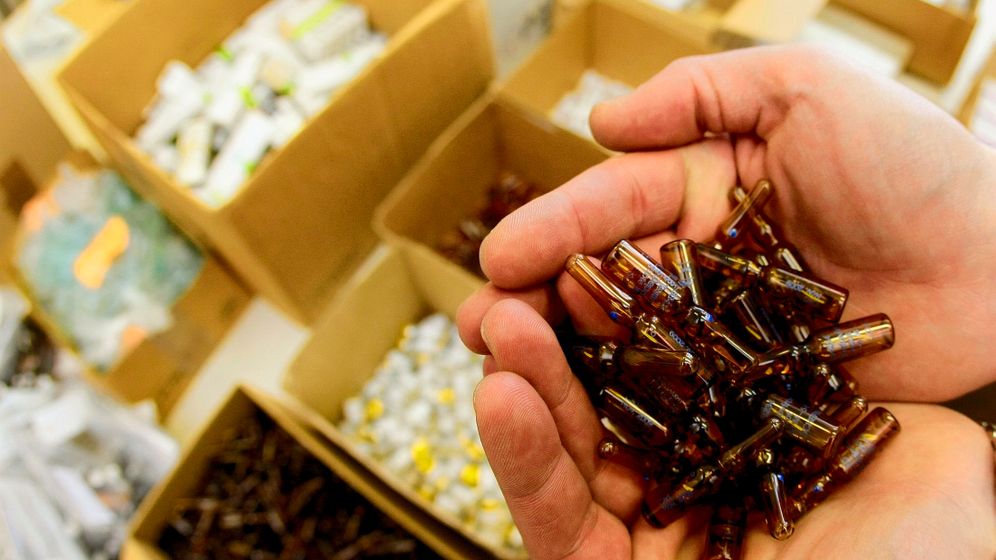 SPIEGEL: Mr. Holzer, in January 2009, a special commission headed by you began investigating doping networks. Since then, the success rates of Austrian winter athletes have dropped significantly. At the 2010 Winter Olympics in Vancouver, for example, they captured seven fewer medals than they did four years earlier…

Andreas Holzer: … and you see a connection between the two?

Holzer: In one year's time, a small special commission cannot cripple doping structures that have been in place for a long time. But we did delve deeply into the material.

SPIEGEL: And what have you found?

Holzer: That the doping trade is a globally networked business comparable to the drug trade -- a mafia, pure and simple.

SPIEGEL: In October, your unit was involved in "Operation Pangea," a major raid in 45 countries that netted 76 suspects and illegal medications with a total market value of roughly $2.6 million (€2 million). Where does it all come from?

Holzer: Many compounds come from China, India or Pakistan, where production is cheap and no one gives any thought to the fact that the production process alone can be hazardous to your health. The active ingredients are sold by online suppliers -- often through illegal online pharmacies -- and are shipped via airmail.

SPIEGEL: Are there inspections of these shipments?

Holzer: There are. But, owing to the sheer volume of mail -- and the fact that drugs are disguised within ordinary-looking packages -- without any concrete leads, it's difficult to pick out any suspicious packages.

SPIEGEL: Where do the drugs finally end up?

Holzer: The dealers are often based in Europe -- and that's where the real business gets started. It isn't the manufacturers of the raw ingredients that are making the big profits: rather, it's the producers -- that is, the people who mix the substances in laboratories, fill the finished product into vials and capsules, label them and distribute them around the world.

SPIEGEL: How big are the profits?

Holzer: Average production costs for a package of anabolic steroids run around 50 cents; and then it's sold for €35 to €40. We arrested a dealer in Austria who had made about €2 million in four years' time. Even I am surprised by these kinds of figures. I spent a long time working as a narcotics investigator, which is why I can say that anyone who deals drugs today is exposed to far greater risks than used to be the case. The doping trade isn't just more lucrative; production is less costly and complicated, and shipping is very simple.

SPIEGEL: Stefan Matschiner, the former track and field athlete and sports manager, was recently convicted of trading in doping substances. The case attracted attention because Matschiner was also selling EPO, an endurance-enhancing hormone.

Holzer: I'm convinced that it wasn't an isolated case.

SPIEGEL: Is EPO also being shipped from Asia?

Holzer: In one of the cases we investigated, the dealer was being supplied by a nearby pharmacy. The pharmacist bought the material for €350 and resold it for €550. Other dealers obtained EPO by using forged prescriptions. It even occasionally happens that entire shipments of EPO are stolen from shipping containers and make their way onto the marketplace. That just goes to show how great the demand is.

SPIEGEL: The most outlandish concoctions are sold on the market, including testosterone creams and high-dose anabolic steroid pills. How are these kinds of thing manufactured?

Holzer: You shouldn't be imagining scenes involving doctors or chemists in white coats handling test tubs in a laboratory. In fact, it looks much more like the production of methamphetamines in meth labs, where the drugs are cooked up over a Bunsen burner. In (the southern Austrian state of) Carinthia, we discovered a laboratory in an apartment that included pure substances and a capsule-making machine. The machine is used to fill the active ingredient into tablet capsules or vials. The equipment is readily available, and the production process is simple. And there are no limits to creativity. For example, anabolic "blades" are the latest hit. They're wafers the size of a DIN-A4 piece of paper, onto which the agent -- usually anabolic steroids -- is sprayed. Consumers break off the pre-perforated dose segments and dissolve them on their tongues.

SPIEGEL: What is the quality of the drugs from these makeshift kitchens?

Holzer: Professional production isn't feasible in underground laboratories. No one guarantees sterility, cleanliness or quality. We have questioned athletes who had handball-sized abscesses on their arms that were caused by contaminated compounds. Convicted producers report that they occasionally put twice as much of the active agent into vials so as to guarantee the desired effect beyond the expiration date.

SPIEGEL: How do athletes and dealers of doping agents find each other?

Holzer: By word of mouth, in places such as health clubs, and on online forums. Professional athletes also look for dealers in these same ways. Indeed, only very few of them have a team physician who will take care of everything for them. As a rule, athletes keep an eye on the scene in the various forums and get tips from older athletes. Then they select a doping-agent dealer whom other athletes have already had good experiences with.

SPIEGEL: Where do the deals go down?

Holzer: I don't want to lump everything together, but the focus is on health clubs and shops where nutritional supplements are sold. In many of these shops, we have been able to seize bags full of anabolic steroids, growth hormones and counterfeit Viagra pills. They're simply kept under the counter.

SPIEGEL: Going shopping in a health club could be risky for a high-profile athlete. Are there other ways to get hold of the drugs?

'Those Who Want to Be Hip Get Testosterone Injections'

Holzer: Yes. We managed to arrest a doping dealer who traveled all over Austria for years, selling drugs out of the trunk of his car. Anyone who needed drugs just called his cell phone. The deliveries were then made at rest stops, in fast-food restaurants and in cafés. The man also sold his drugs in Germany.

SPIEGEL: Who are the buyers?

Holzer: Top athletes only represent a small slice of a dealer's customers. They make most of their money off recreational athletes. For example, during our investigation, we encountered amateur athletes who had invested about €7,000 in doping drugs to prepare for a marathon -- merely to move up from 1,024th place to 912th place. It's absurd.

SPIEGEL: At what age does the demand begin?

Holzer: The youngest athletes who are engaging in recreational sports and doping are 15 or 16. In my opinion, this has to do with the change in lifestyle. Nowadays, everything has to happen as quickly and easily as possible. In the past, smoking pot was the cool thing to do. But, these days, those who want to be hip get testosterone injections to build their muscles or take ephedrine to lose weight. There is an acute danger that, in a few years, addiction levels related to performance-enhancing drugs will catch up with those for conventional drugs.

SPIEGEL: What are the potential side effects associated with doping?

Holzer: The people affected have reported reduced sex drives, strokes and heart attacks. Some people with cancer attribute it to their addiction to doping drugs. Almost all the people who take these drugs suffer from severe depression, and some people have frequent outbursts of aggression. When this happens, the only remedy is another fix of the drug, which of course isn't prescribed by a doctor. It's a vicious cycle.

SPIEGEL: Austria enacted an anti-doping law three years ago. In Germany, politicians and associations have resisted such a step, arguing that existing laws against drugs are sufficient. Are they underestimating the problem?

Holzer: Fighting the doping business is still considered exotic. As its investigators, we are sometimes confronted with the accusation that there are more important problems to be dealt with. This may be true. But it is my belief that, in a few years -- and without coordinated countermeasures -- the trade in doping drugs and counterfeit prescription drugs will be just as big as the trade in heroin, cocaine and cannabis products.

SPIEGEL: What kinds of measures are needed?

Holzer: We need harmonized international laws that make international police and judicial cooperation possible. If we don't get these, in the long run, the battle will be pointless. One network that we uncovered extends from Austria all the way to California. We received a lot of support from our colleagues with the US Drug Enforcement Agency (DEA). But this only worked because the Americans have good laws in this area.

SPIEGEL: Jeff Novitzki, the former special agent for the US Internal Revenue Service, became famous after his investigation led to the conviction of Marion Jones, the former world champion track and field athlete. Now Novitzki is investigating cycling star Lance Armstrong as an agent for the Food and Drug Administration. Do you also have your sights set on such prominent athletes?

Holzer: We aren't focusing on a specific famous athlete. I'm not interested in big names. We want to understand the system and stop the products.

SPIEGEL: Mr. Holzer, thank you for this interview.