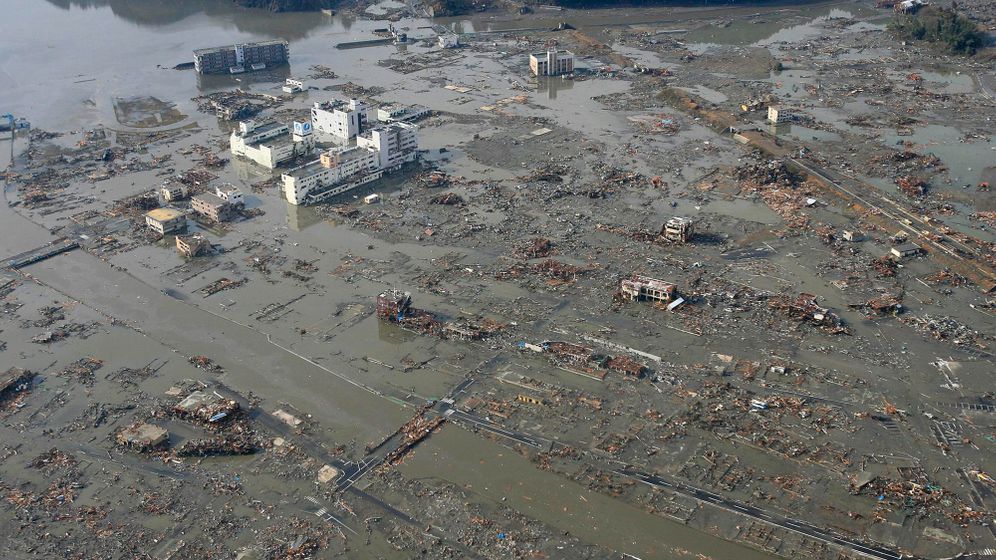 The violent earthquake that struck Japan on Friday caused almost unimaginable devastation, and the tsunami it triggered hit the coast of northern Japan with full force. Waves up to seven meters (almost 23 feet) high buried homes, trees and cars, transforming much into flotsam for a distance of up to 10 kilometers (6.2 miles) into the interior in some areas. At this point, it is still too early to determine the disaster's massive scope.

On Saturday, it remained entirely unclear how many people have died in the tragedy. Japanese authorities are still estimating around 1,400 dead. But, on Saturday afternoon European time, news emerged that 10,000 people are still reported missing in one port city in northern Japan alone. Japanese public broadcaster NHK reported that the missing are from the city of Minamisanriku in the Miyagi Prefecture. The Daily Yomiuri is also reporting 10,000 missing from the city. Prior to Friday's catastrophe, the port city located at Shitsugawa Bay had 17,300 residents. Around 7,500 have been accounted for in emergency shelters; the rest are missing.

Evacuations are being carried out within a 20-kilometer radius of the affected plants. So far, 51,000 people have been brought to safety. Around 24 percent of all the electricity produced in Japan comes from the country's 17 nuclear power plants.

No Power, No Water and Masses of Mud and Debris

More than 215,000 people are currently being held in emergency shelters in Japan. An estimated 1 million households have no access to fresh water, and 4 million buildings are reportedly without power. All the streets that lead from the capital city of Tokyo to the catastrophe region have been closed to non-emergency traffic.

The tsunami hit the northern Japanese city of Sendai, around 130 kilometers south of Minamisanruki, particularly hard. The city, with around 1 million inhabitants, is located around the same distance from the quake's epicenter. Streets and some buildings have been completely covered by the floodwater left behind by the tsunami. Fires have also broken out in some buildings that are not completely submerged, not only in Sendai, but also in many other Japanese cities. Railway companies have reported entire trains missing, as well as the passengers they were carrying. Hundreds of corpses have washed up on Sendai's beaches.

Koichi Takairin, a 34-year-old truck driver, experienced the tsunami in the cab of his truck in Sendai. He described the flood wave to the Associated Press as "unbelievably fast" and reported that "smaller cars were being swept around me. All I could do was sit in my truck."

On Saturday, aftershocks from the massive 8.9-magnitude quake -- the largest one recorded in Japanese history -- continued to rock the country. On Saturday afternoon, an aftershock with a magnitude of six hit off the coast of the Fukushima region, home to the damaged nuclear power plants. Authorities at the United States Geological Survey (USGS) say they have recorded 25 earthquakes since Friday's massive trembler with a magnitude of at least six. More than 150 smaller quakes have also been reported.

An 'Unusual and Extraordinarily Difficult' Situation

With the brunt of the damage behind them, the Japanese began a massive clean-up operation on Saturday, but it would be impossible to predict when things will return to normal in the devastated region. Japanese Prime Minister Naoto Kan, who visited the disaster region on Saturday and conducted a helicopter flyover, implored his people to overcome the "unprecedented disaster."

Meanwhile, Japanese military rescue forces began arriving in the region in boats and helicopters. Prime Minister Kan pledged to deploy 50,000 soldiers for the rescue operations. More than 50 countries have offered emergency aid to the Japanese. US President Barack Obama said one US aircraft carrier was already positioned off the coast of Japan and that a second one was on its way. The United States has also dispatched additional search-and-rescue teams to the country.

Addressing the threat of a nuclear disaster in Japan Saturday, German Chancellor Angela Merkel spoke of an "unusual and extraordinarily difficult" situation.

After an emergency meeting of her cabinet in the afternoon to discuss what help could be provided to Japan, Merkel said: "We are witnessing in horror how an earthquake, a tsunami, elemental forces of nature, can lead a country into catastrophe." The chancellor spoke of a "humility and awe" in the face of nature. Noting the thousands thought dead and the enormous damage and suffering, Merkel said: "We are standing at Japan's side, and we will help where we can provide help."

Events in Japan also triggered a bitter debate in Germany on Saturday about the future of nuclear power in the country. In her statement, Merkel also addressed this anger, saying: "I can understand anyone in Germany who is now concerned." However, she also noted that Germany is "too far away" from Japan to be directly impacted by a possible nuclear catastrophe. Nevertheless, in light of the events in Japan, she said that security standards would also be reviewed at German nuclear power plants. "If an accident like this can happen in a highly developed country like Japan," she said, "then Germany too cannot just go on with business as usual."

German Foreign Minister Guido Westerwelle said Saturday that the country is recommending that travelers cancel any unnecessary trips to Japan. He also cautioned Germans living in the region near the damaged nuclear power plants -- but also in larger Japanese cities, such as Tokyo and Yokohama -- to consider flying home.

A flight carrying the first relief team from Germany's federal emergency relief agency, the Technisches Hilfswerk (THW), departed on Saturday afternoon. The jet is carrying 38 emergency workers, three search-and-rescue dogs and 12 tons of emergency relief supplies. Takeoff had initially been delayed because reports of an explosion at the Fukushima 1 nuclear power plant had caused many to fear that it had suffered a core meltdown.

The team is expected to primarily aid with search-and-rescue operations, tracking people buried in the rubble who may have survived the earthquake and tsunami. The agency will only find out where the team will be dispatched after landing at 8 a.m. local time in Japan.

Speaking of the triple threat posed by aftershocks, tsunamis and possible radiation, THW President Albrecht Broemme said they represented a "special situation, even for disaster-control experts." If the threat of exposure to radiation existed, he added, German rescue workers would not be sent to those areas. "The Japanese wouldn't take any risks or allow foreign helpers to endanger themselves," he said, adding that the team would be withdrawn if the threat of a nuclear disaster in the area increases.