When Spanish justice Baltasar Garzón ordered the arrest of former Chilean dictator Augusto Pinochet in London in October 1998, under an international arrest warrant, the world first took notice of the Audiencia Nacional, the National Court in Madrid. There, in an ugly but functional building near Plaza Colón, a jurist was prepared to dispense justice on a global scale. From then on, no dictator or human-rights abuser, anywhere in the world, could travel to Europe with an easy heart. 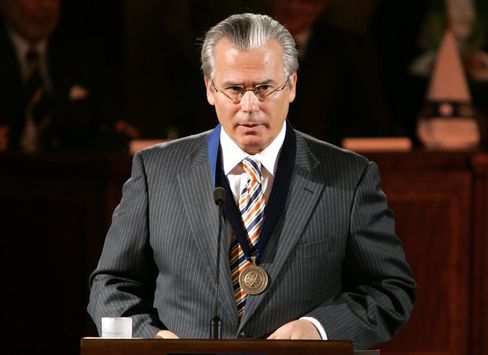 Since 1985, Spanish criminal law has allowed the National Court, or Audiencia Nacional, to pursue criminal cases outside Spain. When either foreigners or Spanish nationals are accused of piracy, terrorism, drug trafficking, or human-rights abuses, the National Court has jurisdiction. A general consensus has formed since the Nuremberg Trials after World War II that acts of horror shouldn't go unpunished, especially when they can't be prosecuted in the country where they occurred.

Garzón, nicknamed "The Bulldog" because of his insistent pursuit of Basque terrorists from Eta as well as the Galician cocaine mafia, became a global nemesis. The son of a farmer from Andalucia found himself on the bloody trail of military juntas in Chile and Argentina after Spanish citizens were "disappeared" alongside Chilean and Argentinian political dissidents.

But the justice with the rimless glasses and gray receding hairline couldn't, in the end, follow through with Pinochet's arrest. He even wanted to call former US Secretary of State Henry Kissinger to the witness stand. But the Chilean dictator was not to remain untouched -- he was put on trial and under house arrest in Santiago. In Argentina, the campaign by the Spanish judge led President Nestor Kirchner to end a general amnesty for the military.

Nevertheless, the Spanish public prosecutor's office challenges the power of the Audiencia Nacional and regularly orders the judges to end their international investigations. These orders are prompted, above all, by pragmatic considerations, when the suspects aren't easy to arrest. Higher levels of jurisdiction in Spain have long demanded a Spanish link to the crimes in question before proceedings can be opened in Madrid.

In October 2005, though, the constitutional court decided that in cases of human-rights violations, the principle of "universal jurisdiction" could be applied without limitation in Spain. This meant the judges in Madrid had a duty to pursue breaches of international agreements -- like the Geneva Convention on handling prisoners of war, or treaties against genocide or torture -- which Spain had signed. All the justices had to determine was that no other court in the world was already trying the same crime.

Other nations have taken on international cases in their court systems -- Germany has done so since 2002. But in Germany the federal prosecutor's office has the final word on whether to set a trial in motion. The justice ministry makes the ultimate decision in case of any doubt, and the federal prosecutor insists on a German connection before allowing a trial to proceed. 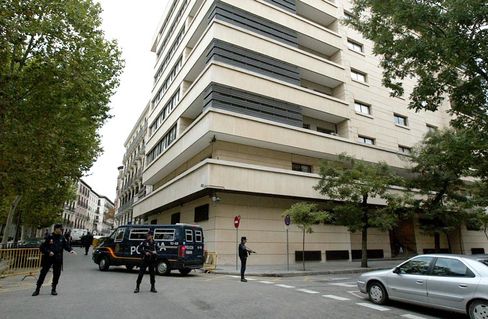 Enemies everywhere: The National Court in Madrid, guarded in 2004 when suspected Islamic extremists were believed to be plotting a bomb attack.

In Spain, however, the victim of a crime -- or even a third party, like a nongovernmental organization -- can bring a case before an examining magistrate at the Audiencia Nacional. The judges are also free to gather evidence without special permission from the public prosecutor's office, and to push these investigations as far as possible.

Of course, special international courts were set up to deal with certain cases, like allegations of human-rights abuses in the former Yugoslavia, Rwanda, Sierra Leone and Lebanon. At last, in mid-2002, the International Criminal Court opened its doors in The Hague.

However, Luis Moreno-Ocampo, the chief prosecutor in The Hague, can only get to work when he's assigned a case from ICC signatory nations or when the UN Security Council hands down a mandate. He can also deal only with crimes committed after 2002. Belgium itself -- in its national court system -- also tried to bring international criminals to justice, but since Belgium's claim on "universal jurisdiction" was tightened in 2003 because of mounting diplomatic problems with the home nations of some defendants, cases have piled up in Madrid.

Even Cheney and Rice?

At the moment, the six justices at the Audiencia Nacional have 14 criminal cases to consider under international law, which affect eight nations -- out of a total of 2.5 million related cases. One case has been closed so far: The Argentinian naval captain Adolfo Scilingo, who turned himself in to Garzón in 1997, was sentenced to 640 years in jail.

But Garzón, 53, has caused the most commotion by investigating six advisors to George W. Bush who helped establish the legal basis for waterboarding and similar interrogation methods at the American jail in Guantanamo Bay. While his colleague Eloy Velasco investigates whether US courts will take up the case, Garzón is considering accusations by four onetime Guantanamo inmates who claim to have been abused during their arrest and long imprisonment. He personally oversaw their extradition and charged them with belonging to a Spanish cell of al-Qaida. (One of them is a Spaniard.) High-ranking American military figures and members of the Bush administration, including Vice President Dick Cheney and Secretary of State Condoleezza Rice, are now in the judge's sights because they allegedly signed off on "a systematic plan for abuse."

Fernando Andreu, for example, is investigating seven Israeli politicians and military officers, including a former defense minister, Binyamin Ben-Eliezer, because of an airstrike in the Gaza Strip in July 2002 that killed 14 civilians. Justice Santiago Pedraz is hearing charges against three ministers of the Chinese government -- among other defendants -- who are accused of a "systematic attack on the people of Tibet." These prominent cases have put the Audiencia Nacional back in the headlines and brought the Spanish government under foreign pressure.

Beijing has brusquely rejected a petition by Pedraz to interrogate the ministers at home. The Madrid justice would be arrested immediately if he travelled to China, the government threatened. The Chinese foreign ministry warned the Spanish govenrment -- which is interested in good trade relations -- not to meddle in China's internal affairs or to support the Tibetan separatists.

Spain's Socialist president, José Luis Rodriguez Zapatero, felt even more direct pressure from emissaries of US President Barack Obama in Madrid after he tried, in April, to improve relations with the world's sole superpower -- which have been clouded ever since his removal of Spanish troops from Iraq in 2004.

And in January, Israel's then-foreign minister Tzipi Livni wrested a promise from her Spanish counterpart Miguel Angel Moratinos to reform the rules of procedure that have made the Audiencia Nacional a de facto international court.

"We cannot become the world's judicial gendarme," said Carlos Divar, chief justice of the Spanish Supreme Court and chairman of an internal watchdog body that oversees Spanish courts. "Who are we to pass judgment in foreign countries when we have so much to deal with at home?" said the man who until recently was president of the Audiencia Nacional and disapprovingly witnessed his judges' ardor for pursuing foreign cases. His successor, Angel Juanes, also wants to see more consideration for "national interests" in the court's behavior.

'Against the Spirit of Universal Jurisdiction'

Critics of the court in Madrid may find satisfaction by the end of the year. The ruling Socialists have forged a rare agreement with the conservative opposition to rein in the principle of "universal jurisdiction." The accused will have to be arrested in Spain, a victim will have to be a Spaniard, or there will have to be some other decisive connection to Spain before the court will be allowed to proceed. There will also have to be proof that no other national court system has taken up a given case.

Most of the justices in the Audiencia Nacional are against these restrictions, which are "against the spirit of universal jurisdiction as a mechanism to end impunity," according to Baltasar Garzón. The justices believe their international battle, with law book in hand, is the price the Spanish government must pay to defend its human-rights agreements.

The reform by the Spanish government that promises to restrict the court's jurisdiction may come into force by the end of 2009. That would mean the dismissal of five international investigations -- three dealing with China and two with Israel. Then the plaintiffs will have to find Spaniards affected by any given case, and the process would have to start over again.