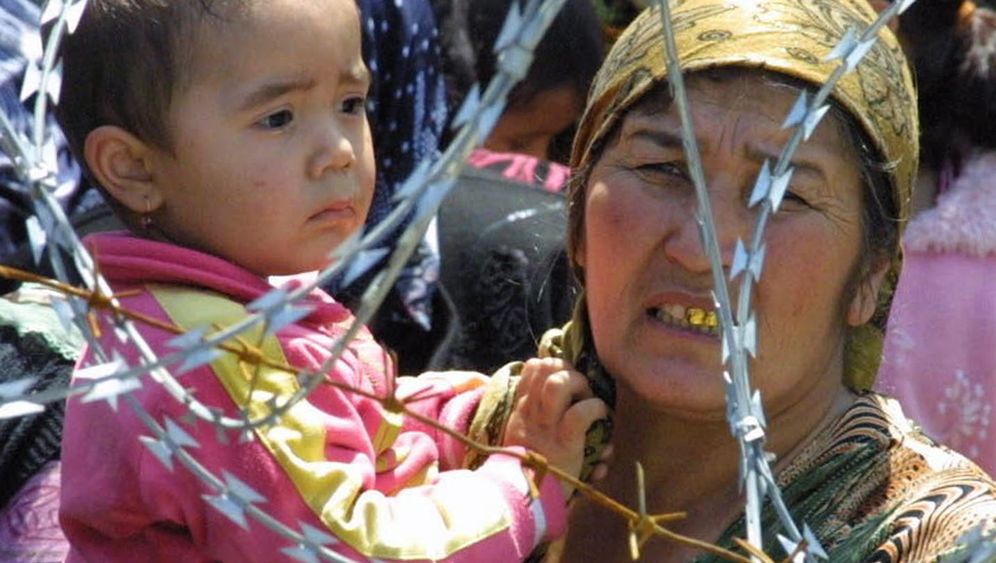 SPIEGEL ONLINE: The news from Kyrgyzstan is deeply disturbing. Officially, 170 people have been killed during the angry unrest over the last week and other sources put the death toll above 700. What is the current situation?

Schmitz: Official figures probably understate the number of dead, which is likely to be considerably higher. I do not have the exact numbers. The situation at present is so chaotic no one can reliably count the dead.

SPIEGEL ONLINE: Reports say almost all the dead belong to the Uzbek minority.

Schmitz: That appears to be correct. However, it's also said that those behind the unrest have tried to turn Kyrgyz and Uzbeks against each other. But the violence has clearly focused on the Uzbek minority.

SPIEGEL ONLINE: Some speculate that the ex-President Kurmanbek Bakiyev, who was toppled in April, is behind the unrest. Do you consider this plausible?

Schmitz: I do not think that Bakiyev, from the distance of his exile in Minsk, is in a position to pull the strings. But I am firmly of the belief that parts of his network and his followers -- possibly in conjunction with protagonists from organized-crime circles -- may have instigated the violence. It has become clear that supporters of the former president are not prepared to let anyone take either power or resources. In addition, there is some evidence that revenge has played a role. Some of the Uzbek "strong men" said to have drug trafficking connections have made the mistake of positioning themselves in the power struggle, supporting the interim government and standing against the followers of Bakiyev. I expect that Bakiyev supporters have not forgiven them for that.

SPIEGEL ONLINE: In addition to vengeance, is the unrest also about undermining or even overthrowing the transitional government of Roza Otunbayeva?

Schmitz: Absolutely. This was clearly about creating chaos and preventing the referendum on a new constitution, planned for late June. The problem of the transitional government is that it has no legitimacy and is hardly in a position to calm the situation.

SPIEGEL ONLINE: At the moment the situation seems to have calmed slightly.

Schmitz: But the danger has not yet passed. I assume the perpetrators of the pogroms have retreated to discuss how to proceed.

SPIEGEL ONLINE: Aid agencies are working on the assumption that hundreds of thousands of Uzbeks have fled. But Uzbekistan has not open its borders. Why?

Schmitz: At first Uzbekistan did open its borders, but after up to 80,000 refugees entered the country, Uzbekistan is apparently unable to accept more. That is not implausible.

'Russia Plays a Sorry Part in This Conflict'

SPIEGEL ONLINE: What is Russia's role? The transitional government asked Moscow to intervene, but that has not happened.

Schmitz: Russia plays a very sorry part in this conflict. Right now one has the impression that Russian crisis-management exists as a pretense, not as reality. This is also evident from the debate within the regional security body, the Collective Security Treaty Organization. It's dominated by Russia, and it could not agree to send a peacekeeping mission. I can explain this only by saying there is a lack of deployable forces, a lack of political will and lack of responsibility. It's becoming more and more clear that in emergencies, you can't rely on Russia as a crisis manager. Moscow wants power and influence, but it's not prepared to accept responsibility.

SPIEGEL ONLINE: What are possible reasons for Russia's restraint?

Schmitz: Resistance to an intervention looks equally strong in the parliament, the leadership and the public at large. Part of the reason is fear of a second Afghanistan. Another part is the complexity of Kyrgyzstan's predicament. The risks are considered too large to take on.

SPIEGEL ONLINE: Who else can help?

Schmitz: If others can't help, it normally falls to the United Nations to play fireman. If the situation doesn't ease, a peace mission under UN mandate would be probably the wisest step. The EU is also needed, at least for humanitarian assistance.

SPIEGEL ONLINE: How would you assess the risk posed to neighboring republics?

Schmitz: The risk is currently not very high, but by definition it does exist because of the ethnic instability in Kyrgyzstan. One worrying speculation is that those behind the escalation may enter an alliance with Islamist terrorists in the region. That would be disastrous.

SPIEGEL ONLINE: What are the realistic measures you believe should be taken?

Schmitz: First, humanitarian assistance for refugees, the injured and the traumatized. In addition, food and medical assistance and effective protection of the population. The Collective Security Treaty Organization has promised to bring supplies to help stabilize the area -- fuel for example. Let's hope it happens. Kyrgyzstan needs all the help it can get.

SPIEGEL ONLINE: Can the referendum be held as planned?

Schmitz: The transitional government lacks legitimacy and control over substantial parts of the administrative apparatus. At the moment Kyrgyzstan doesn't even have a parliament. The referendum, scheduled for late June, should relieve the situation. But under current circumstances, the referendum could turn out to be unrepresentative. Participation, especially in the south, will be too low, meaning there would be no point to hold a referendum. So it might be wiser to postpone and to put emphasis on restoring the functioning state. After all, Kyrgyzstan is currently on the brink of collapse.