The small Tibetan restaurant is open late, and the relatively few guests have retreated to a corner. They anxiously observe what is happening out on the street. Blue light flashes through the window as a dozen policemen march by, in tight formation, wearing helmets and riot gear.

Most of the shops nearby have already closed, much earlier than usual. An eerie silence hangs over Tongren, the center of a region that is primarily inhabited by Tibetan nomads in Chinas northwestern Qinghai province and officially called an autonomous area.

Normally, this town is teeming with tourists. But foreigners have been barred from coming here ever since the Tibetan inhabitants of this vast and remote mountainous region demonstrated over two weeks ago for the Dalai Lama and Tibetan independence. Locals now practically live under a regime of occupation.

Just walking through the streets at night can be dangerous. The Chinese police simply grab us and beat us, says a Tibetan woman.

She keeps her voice down to a whisper; contact with foreigners is dangerous. The Chinese authorities could send her to prison for a wide range of offences, from divulging state secrets to disturbing the socialist order.

A report from Greece flickers on the TV. It shows the lighting of the Olympic flame, but Chinese censors have removed all footage of the protests. A guest switches to a local channel where the authorities are presenting a group of detained Tibetans from the area. They allegedly took part in the recent violent unrest. In two neighboring towns, administrative buildings were set on fire -- acts that the government maintains were carried out on behalf of the Dalai Lama clique.

However, the governments vitriolic attacks on the spiritual leader make no impression on the Tibetans. We carry the Dalai Lama in our hearts, says the woman. Her friends nod in agreement. They wear fashionable clothing, not the long traditional garb that is preferred by many locals, and they say they cannot complain about their economic situation. But they want to ensure that their culture is preserved, and they see the Dalai Lama as the symbol of that identity.

It is risky even to talk about the devil with a human face, as Beijing calls the reviled Tibetan leader. Posters on the walls warn of discussing Tibetan affairs. In the mornings, roughly 200 hundred armed police march through the city, rhythmically uttering fighting shouts. Very few people venture onto the streets.

At that time of the day, many locals walk to Longwu Temple, which towers in front of a yellowish-brown mountainous backdrop, and turn the prayer wheels. Women throw themselves on the ground to pray before the golden Buddha. The holy shrine was renovated with money from Chinese companies, and even the Chinese government has been generous when it comes to sprucing up the region for tourists. Freshly-painted temples shine in all their glory alongside country roads, but these exotic attractions have an artificial quality. 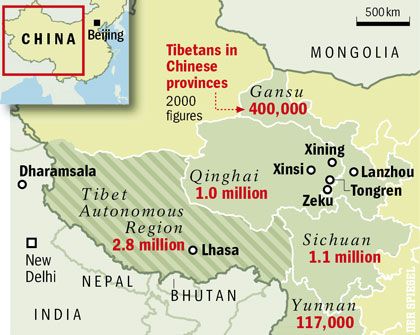 Everywhere you look, there is a strange mixture of Chinese progress and Tibetan past. This is exemplified in everyday life by a Tibetan herding family near Tongren. In front of their mud hut stands an oven for sacrificial offerings -- right next to a satellite dish that allows them to receive 40 TV channels.

The head of the family, a woman with a weather-beaten face who looks older than her 54 years, invites us into the single, tiny room. Her adult daughters and son stoke the iron stove with yak dung. Six animals -- the basis of their very existence -- are put out to graze on the mountain slopes. The herders sell the wool and consume the milk and butter themselves.

On an altar near the TV hangs a portrait of Danzeng Jiumeigadan, the living Buddha of Tongren Temple. He is 29 years old; the Communist Party has allowed him to become a holy man. Chinas atheistic leaders intend to maintain supremacy even in the religious realm of reincarnation. The arrangement has paid off for the authorities. When the monks recently decided to demonstrate outside the monastery, the party-loyal Buddha reportedly dissuaded them.

But all Tibetans see the Dalai Lama as the greatest living Buddha. The herder points to a poster of Potala Palace in Lhasa: When the Dalai Lama returns there, we can at last live in peace. Without a doubt, the Tibetans here are much better off than before, especially in comparison to the Cultural Revolution, says the woman. Back then, Maos Red Guards murdered her parents and even young Tibetans took part in the killing, she recalls. For years, she had to hide in the mountains.

But even if Tibetans continue to benefit from economic development in the region, they will never feel like full-fledged citizens. The paradox of their situation is that Chinas growing prosperity has further fueled ethnic tensions, not only between Tibetans and Han Chinese, but also with members of the Muslim Hui minority, who are streaming into the region as successful merchants and restaurant proprietors. Clearly, the Tibetan herders can only keep pace with economic growth if they change their lifestyle.

Not many are willing to take this step, and so ethnic differences have flared into open conflict. One of the hotbeds of friction between these groups is Zeku, the home of some of the recently arrested alleged ringleaders. Zeku is an important meeting place for young Tibetan herders who roar down from the highland on their motorcycles, which they saddle with woolen blankets as if they were riding wild horses.

The young nomads usually come to Zeku to make purchases or just hang out together. Wearing long coats, they squat on the roadside -- intrepid souls, ruffled by the steppe winds. They play with their cell phones and chat about this and that. But they only meet in small groups, otherwise the Chinese authorities would intervene immediately.

Zeku is also currently brimming over with heavily armed representatives of the law. Two weeks ago, when the unrest flared up in Tibet, the Tibetans here suddenly started walking up and down the main street for hours on end, silently and peacefully, until paramilitary police arrived on the scene and dispersed the crowd.

A few days before the protest, most of the Muslims left town, says a young Tibetan. Apparently, they had gotten wind of the planned Tibetan demonstrations. We hate the Muslims, he says, They cheat us and sell us poisoned food.

'You Have to Leave the Monastery'

Chinese leaders in Beijing are using police and propaganda in an attempt to defuse tensions in the western provinces of their huge country. The government sees Tibetan monasteries as key potential pockets of resistance, including centers of spiritual contemplation like Xinsi that have not taken part in the recent unrest.

The Xinsi Buddhist monastery lies to the west of Xining, the capital of Qinghai Province, surrounded by a breathtaking landscape of snowcapped mountains. Some one hundred monks live here in mud houses, including many children.

A seriously ill man lies in front of the prayer hall, wrapped in coats and blankets. Inside, lamas are sipping their noon meal from small bowls. On the altar of the temple is a photo of a living Buddha. He slipped away to India, whispers a monk. He was recognized by the Dalai Lama.

No wonder the authorities eye the monks with suspicion, even though virtually no one would take notice of a protest or demonstration in this sparsely populated area. They keep us under surveillance day and night, says one as he glances furtively over his shoulder.

Immediately following the uprising roughly 1,200 kilometers (745 miles) away in Lhasa, the Chinese sent an official to the monastery to keep an eye on the monks. The man introduced himself as a representative of a working group from the local party office and referred to recent events in Tibet. We have to maintain stability here, he says, adding that journalists are unwelcome in Xinsi.

The party man does permit, however, a short visit with the living Buddha of the monastery. His name is Dorjee Xianbaluosanlongduojiansan and he is 32 years old. If he werent wearing a monks robe, he would look like one of the wild motorcycle youths in Zeku. Dorjee is crouching on the floor. He has a mobile phone in his robe and is busy working on his computer. A photo of the Dalai Lama has been placed in a cabinet and the room also has a TV. The monks recently tried to set up an Internet connection. But it was too expensive, they say.

A child refills the cups with butter tea. Under the watchful gaze of the party functionary, a conversation cautiously takes shape, and the most important things have to remain unsaid. Nevertheless, the monk clearly conveys what he thinks -- with a smile, a grin, or a quick shake of the head.

What do you have to say about the events in Tibet?, the reporter finally asks. The living Buddha shows his white teeth and doesnt say a word. His assistant glances to the official, the lama, and the guest. No one answers, the interview is over.

A few minutes later, the police arrive: a Tibetan colonel, badge number 030403, accompanied by a plainclothes associate named Dong. You have to leave the monastery, says the colonel. We are here to ensure your safety -- this is a precautionary measure.

Is the area around Xinsi dangerous? No, answers the officer, but he says that they have information concerning unstable factors. Now the monks stop smiling. They are still allowed to give a tour of part of the monastery, but then the colonel loses all patience. He storms into the prayer room and throws the visitor out. The monks glance up from their bowls with a shocked expression on their faces.

The intense edginess of the Chinese government is also palpable in the city of Xining, with its mixture of dilapidated apartment blocks and chic new skyrises. For "security reasons," taxis are no longer allowed to carry Tibetan passengers.

The railway station square is filled with police. In the building itself, in front of the counter where tickets are sold for Lhasa, three officers have set up a table and a computer and are checking all passengers. Everyone who they believe has no good reason to travel to neighboring Tibet is turned away. Their decision is final.

Near the railway station, life goes on as if nothing had happened. Monks and other Tibetans stock up on nomadic tents, prayer wheels, carpets, jewelry and traditional clothing. A nomad in a green fur-trimmed jacked examines a tent.

Tibetans have also protested in his home town in western Qinghai, burning cars and destroying shops, he says. Han Chinese and members of the Muslim Hui community have also been attacked, and he adds that the police have shot 10 to 20 people. Afterwards, a large number of troops were deployed there from Lanzhou, he says.

Although he has achieved a measure of prosperity during the past few years, he also feels oppressed by the big country, as he calls China. He feels that the Chinese take too much money from Tibet. We have natural resources, medicinal herbs, animals. If we were independent or autonomous, we could handle these business activities ourselves.

This nomad is also familiar with the allegations from Beijing that the Dalai Lama has instigated the unrest. He thinks that its nonsense. We won't let them drive a wedge between us and the Dalai Lama, he says.