Aleqa was the first born child in a family from Uummannaq in northern Greenland, and that would normally have meant that her life was already mapped out for her. In the region, about 600 kilometers (373 miles) north of the Polar Circle, halibut, whales and seals have shaped the cycle of life for centuries. The men go fishing and hunting, while the women cook and raise the children. There is little room for extravagance on the fringes of the eternal ice.

But things were different for Aleqa. She was only seven when her father disappeared forever under the ice during the seal hunt. At 13, she decided to learn English and French instead of the official language. "Danish," she says, "is a weak language."

After finishing school, Aleqa went to college in Canada, instead of Denmark, to earn a degree in teaching English. Then she returned home to earn a second degree, this time in the study of her native Inuit culture.

Today Aleqa Hammond is 43. She is the foreign minister and finance minister of the semi-autonomous island republic, and an important advocate for removing the polar island from the Kingdom of Denmark, which also includes the Faroe Islands. Greenland wants independence. "It's a natural and perfectly normal step," says Hammond. "We don't look like Danes, we don't think like Danes, and we are not Danes."

Normal is a word that applies to very little near the Polar Circle. The island, 85 percent of it covered in ice, is six times as big as Germany. The harsh living conditions are extremely demanding on the population of roughly 57,000, of which 89 percent are Inuit. The only time the international community ever pays any attention to the region is when heads of state like German Chancellor Angela Merkel use Greenland's glaciers as a backdrop for photo ops to promote their agendas on climate change, when the whale hunting season begins or when the high suicide rate becomes a political issue.

Fishing, mostly of halibut, cod and crabs, is Greenland's main source of revenue. Without generous subsidies from Copenhagen, the government of the former colony would have gone bankrupt long ago. The Danish government injects 3.2 billion Danish kroner (€430 million, or $550 million) into its Arctic outpost each year, or about 50 percent of the budget.

But for how much longer? On Nov. 25, Greenlanders will decide in a referendum whether the current system of self-administration in health care, education, culture and fishery should be followed by economic and foreign policy autonomy, and eventually by complete independence. After the referendum, the decision will be up to the parliaments in Nuuk and Copenhagen. Island residents are extremely optimistic.

"The waters are our greatest resource," says Aleqa Hammond. She means this in two ways. Because of its fish-rich waters, but also out of fear of an invasion by international fishing fleets, Greenland withdrew from the European Community in 1985. "We are not Europe, nor do we feel like Europe," says Hammond, noting that Greenland is in fact on the North American continental shelf.

'We Know That There Is Oil'

Greenland's officials hope that the island's largely untapped mineral wealth will help smooth the way into autonomy. Seven mines will begin operations in the coming years, producing gold, diamonds, coal, zinc and olivine, a mixed crystal and semiprecious stone popular with jewelry designers. But Greenland's greatest treasure lies on the ocean floor off the coast, at depths of up to 1,000 meters (3,280 feet).

Seismological analyses have pinpointed enormous oil reserves, especially off the west coast. EU governments estimate that Greenland's reserves total at least 110 billion tons. Two smaller fields west of Nuuk, with reserves of about 2 billion tons, are believed to contain as much oil as the amount produced in the North Sea over the last 40 years. 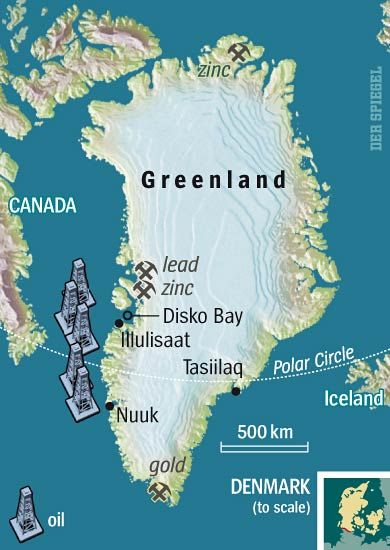 Eight other fields, seven of them with highly lucrative prospects, are off the coast near Disko Bay, at the mouth of the island's famous Kangia ice fjord, with its picturesque icebergs. "We know that there is oil, but we just don't know for sure how much of it can be produced in a way that is economically worthwhile," says Jørn Skov Nielsen, the head of Greenland's Bureau of Minerals and Petroleum.

Ironically, while the world worries about climate change, global warming is triggering great hopes in Greenland. If the Arctic waters were truly ice-free in the summer in five to 10 years, which would be significantly sooner than previously feared, this could be good for Greenland -- at least economically.

Under Greenland's autonomy agreement with Copenhagen, the bulk of revenues from possible oil wells would remain on the island. The first 75 million Danish kroner would flow into Greenland's pockets, while each additional kroner after that would be split evenly with Denmark by reducing the subsidy Copenhagen normally sends to the island.

According to calculations by Mininnguaq Kleist, the head of Greenland's equivalent of the German chancellery, if oil revenues exceed 6.5 billion kroner (about €1 billion or $1.28 billion), the island will have practically bought its freedom. When that happens, it will "no longer be up to Denmark to decide on our independence," says Kleist. But even Kleist cannot predict when that day will come. Nevertheless, speculations are already running wild on what Greenland could do with billions in oil revenues. Following in the footsteps of Norway, which became Europe's second-richest country (behind Luxembourg) thanks to its oil revenues, the Greenlanders want to establish an oil fund as a fallback for tough times.

Eastern Greenland Is 'Bleeding to Death'

The territory's social problems highlight the importance of such reserves. They include domestic violence, sexual abuse of children, alcoholism, underage pregnancy and a high suicide rate. In an "emergency call" through the media, Kristian Sinngertaat has sharply criticized the political "holiday speeches for autonomy."

Sinngertaat is the chief of police in Tasiilaq, one of two cities on the raw east coast. The fast ice season here is long and the belt of pack ice wide, even in the spring and summer. The people live from seal hunting and a small amount of tourism. Industrial fishing is practically nonexistent.

There is no talk of a golden future in eastern Greenland. The island's development is taking place on the west coast, where the Gulf Stream provides for more stable weather.

Many families in Tasiilaq live "in desperate conditions," says Sinngertaat. The town is still home to about 1,800 people, but its population declines almost daily. In early June alone, there were 15 suicides or attempted suicides in the town in the space of a few days. The east coast is "literally in the process of bleeding to death," wrote the most important newspaper, Grönlandsposten. Half of all young people in the region are believed to have attempted suicide at least once.

Suicide is alarmingly prevalent on the island. There were 58 suicides in 2006, the most recent year for which statistics are available. Twenty percent of girls 15 to 17 years of age have already attempted suicide once, while 20 percent of all young people have seriously thought about killing themselves. This is a lonely record. The respective suicide rates in Denmark and Germany are 14 and 13 per 100,000 residents. Lithuania has Europe's highest suicide rate, 39 suicides per 100,000 -- about half as much as Greenland.

There is much speculation over the reasons. The chief of police blames the dismal outlook on the east coast. Without work and recreational opportunities, young men, in particular, feel like "second-class citizens," says Sinngertaat. Many turn to alcohol and "drink themselves senseless."

Up to 70 percent of all young people do not finish school or learn a profession. "There will always be people who don't do as well as others," says Foreign Minister Hammond. "We cannot be compared with Europe," she adds.

"Mælkebøtten" (Dandelion) is the mellifluous name of a children's and youth center near the parliament building in Nuuk. Next to Ilulissat, an important tourist destination with an ice fjord and nearby glaciers, the small capital is the island's most important city. Mælkebøtten's private funding by sponsors is unusual in a system in which the government has an even stronger hand in the welfare and prosperity of its citizens than in other Scandinavian countries. Diplomats refer to Greenland as "Europe's last planned economy."

'Too Many People Have no Future'

More than a year ago, Mælkebøtten began to offer children and adolescents a safe haven from violence and neglect at home. The children come to the center on weekends, when their parents are often drunk. Some also come during the day on weekdays, when they need the attention they do not get at home or simply a warm meal. They can surf the Internet, play, read or simply hang out at the center. They can also stay overnight, if necessary.

"Normally we are fully booked," says Denise Schröder, a 29-year-old social worker. Up to 1,000 children come to the center every month for safety and protection -- a significant figure when compared with Nuuk's total teenage population of about 4,000.

This number does not even include the truly severe cases of mentally ill children or victims of violence, who are cared for in government treatment or health centers. The staff members at Mælkebøtten are also likely to learn very little about the details of sexual abuse among girls who come to the center. "It's a taboo subject," says Schröder, "and the number of unreported cases is high."

Schröder, a Dane, came to Greenland voluntarily. She likes it there, despite the icy social climate. "We cannot truly help, and that's tough," she says. "Too many people have no future," she says, adding that independence will do nothing to change this.

This is not the kind of sentiment Aleqa Hammond likes to hear. "If you look for dirt you'll find it," says the foreign minister, adding that this is the same everywhere, even in the new Greenland. "People should be prepared for becoming a rich country," says Hammond, a Social Democrat. It is possible, she says, that independence and prosperity will arrive sooner than expected. "And I want to be here to celebrate."