Portugal's foreign minister says "the time has come" for European Union governments to help resettle prisoners from the American detention center at Guantánamo Bay, a move that could help the US close the facility after President-elect Barack Obama takes office next year.

"The time has come for the European Union to step forward," Luís Amado wrote in a letter to other EU member states made public on Thursday. "As a matter of principle and coherence, we should send a clear signal of our willingness to help the US government in that regard, namely through the resettlement of detainees. As far as the Portuguese government is concerned, we will be available to participate." 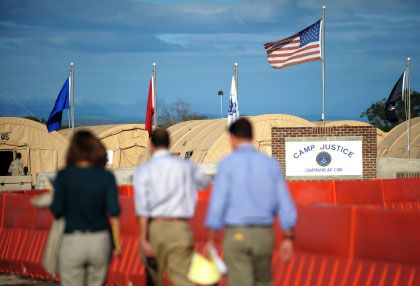 The Guantánamo facility in Cuba currently holds around 250 detainees. Their uncertain status as "enemy combatants" -- not formal prisoners of war or even, necessarily, suspects facing criminal charges -- has been a self-created legal problem for the US.

American officials say that many of the 60 or so prisoners now cleared for release at Guantánamo have a reasonable fear of persecution or torture in their home nations -- including Algeria, China, Libya and Uzbekistan. US Secretary of State Condoleezza Rice asked Portugal for help in relocating some of these prisoners last year, when Portugal held the rotating presidency of the European Union.

But so far no one has stepped forward. European leaders, including German Chancellor Angela Merkel, among others, have called for Guantánamo to close, but no one has offered to resettle any of the so-called "hard cases." A legal adviser for the US State Department, John B. Bellinger III, told the New York Times that the Portuguese letter was a "major milestone in our efforts to secure help from the international community."

Human-rights organizations have called on European governments to help. "For years the US has been unable to convince its European allies to accept Guantánamo detainees who cannot be sent back home," said Jennifer Daskal, a counterterrorism legal expert at Human Rights Watch. "For the first time an EU government is publicly pushing to make that happen and others should echo Portugal's call."

But she said a breakthrough would come only with cooperation from a new president in the White House, who would have to show that the US can also absorb the potentially dangerous prisoners. President-elect Obama has promised to close Guantánamo but hasn't offered a detailed plan. He's said some of the detainees -- though not all -- can be prosecuted in American courts.

So far there has been no US response to the Portuguese overture. Some US officials have opposed resettlement on American soil.

However, Daskal said, "The new Obama administration is going to have to jump-start this by accepting some of the detainees."