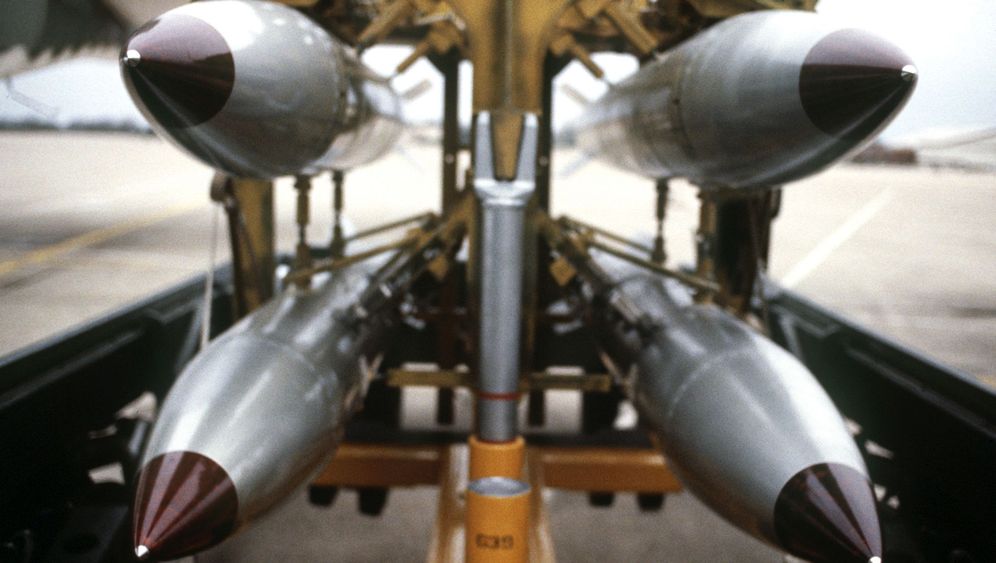 The B61 is the last remnant of the Cold War in Germany. An estimated 10 to 20 of the atomic bombs are thought to remain in storage at a German Air Force base in Büchel, a village in the Eifel mountains of western Germany. Should war break out, the Tornado aircraft belonging to the German Air Force could immediately be armed with the weapons for sorties under US control.

But the fact that such a scenario is considered extremely unlikely has not prevented the US from embarking on an effort to upgrade the stockpile, as it is doing with much of its nuclear arsenal. The Life Extension Program (LEP) for the B61 -- of which there are between 160 and 200 in Europe -- is considered to be the most difficult and expensive of all. In 2010, the Department of Energy requested almost $2 billion (€1.6 billion) for the project, to be spent over four years. Later, the number rose to $4 billion.

Now, the total is expected to by closer to $6 billion, as several experts have reported independently. The first to write of the exploding costs was Hans Kristensen of the Federation of American Scientists (FAS). Other experts are not surprised. "The $6 billion estimate for B61 LEP is consistent with our estimates," wrote executive director of the Arms Control Association in Washington, Daryl Kimball, in an email.

In late April, several senators demanded that funding be cut to the B61 refurbishment program, at least until the National Nuclear Security Administration (NNSA), which is responsible for the upgrades, presents a detailed timeline and funding plan. That the costs for the project are now three times the original estimate is not likely to meet with euphoria in Washington. The NNSA also hinted to SPIEGEL ONLINE that the expenses threaten to be higher than anticipated. "We are formally validating costs and expect to have something in the coming months," NNSA spokesman Josh McConaha said.

The costs are not the only element of the refurbishment program which has experts shaking their heads. Many are uncomfortable with the sheer extent of the B61 modernization program. The NNSA wants to revamp old components, install new safety mechanisms and detonators and make improvements to the design all at the same time. Such an all-encompassing renewal effort has never been tried before, says the Union of Concerned Scientists, a group which is critical of nuclear weapons. They also warn that some of the new parts, including the detonators, are not yet ready for prime time. "You read that right," wrote UCS experts Nickolas Roth and Stephen Young on the group's website. "The multi-point safety and new detonators are unproven, immature technologies."

In short, the project -- should it succeed despite the high costs and technical hurdles -- is not merely limited to extending the weapons' lifespans, but would be akin to creating a new weapon altogether. Should the improved B61 weapons find their way back to bases in Europe in 2019 as planned, they "will in essence be a strategic bomb," FAS expert Kristensen told SPIEGEL ONLINE. "They will be able to hold at risk targets that the weapons in Europe currently cannot hold at risk."

Tactical atomic weapons like the B61 are designed to be deployed against enemy soldiers on the battlefield. They tend to by much less powerful than strategic nuclear weapons, which can be deployed to neutralize an enemy country's nuclear arsenal or even destroy entire cities. The modernized B61, Kristensen fears, could change from being a tactical weapon to a strategic one.

The B61 modernization program envisions modifying four existing bomb models (or "mods") -- the 3, 4, 7 and 10 -- into one, the B61 Mod. 12. An important new feature is a new tailkit with controllable flaps. The new system would dramatically increase the bomb's precision.

The new B61-12 will be able to carry four different warheads, which range in strength from 0.3 to 45 kilotons of TNT. As a comparison, the bomb dropped on Hiroshima at the end of World War II had a strength of 15 kilotons. "This weapon can do the same amount of damage militarily as the very high-yield weapon attached to the B61-7," says Kristensen. Götz Neuneck, from the Institute for Peace Research and Security Policy, likewise warns of the "drastically improved mission capabilities" of the B61.

In addition to the upgrades, the bombs are also to be carried by the stealth fighter F-35, which is currently in development. The weapon and the fighter jet are to be perfectly compatible, such that the F-35 -- also known as the Joint Strike Fighter -- will be able to stow two of the bombs in its hold. Such a capability could provoke new trouble with Russia, which is already unhappy with the planned European missile defense shield.

"I'll bet there are hardliners in the Kremlin who are already now looking at this issue and saying 'aha, this is another example of NATO saying one thing and doing another," says Kristensen. "There are always irritants. This is going to be another one."

ACA director Kimball agrees. "Deployment of the B61-12 in Europe would complicate the effort to bring Russia to the tactical nuclear weapons negotiating table," he says. Neuneck also echoes the sentiment. The B61-12, he says, would greatly impede negotiations on the Nuclear Non-Proliferation Treaty and would put an end to efforts to withdraw all atomic weapons from Europe.

Whereas most concerns are focused on the B61-12 with the largest warhead, the smallest warheads with a strength of just 1.5 kilotons or even 0.3 kilotons could likewise present considerable dangers. "If you have increased accuracy, it opens up new possibilities for also using the lower yields for missions," says Kristensen. The biggest advantage is less radioactive fallout. "The pressure and the heat from the explosion gets closer to ground zero, exactly where it has to go off. You don't have to use as much explosive power and there is less fallout. It's a cleaner nuclear attack."

Neuneck also says that the "smaller size and increased accuracy" of the mini-nukes "would make their actual use more likely."

The US government has long sought to develop such miniature atomic weapons. Strategic nuclear weapons have long since become so powerful that their deployment no longer seems likely. As such, they no longer represent much of a threat. Smaller atomic weapons, many politicians and military leaders believe, would pose more of a credible threat because of the increased likelihood that they would actually be used.

The development of such weapons, however, has repeatedly failed to overcome objections from the US Congress. A majority of congressmen and women believe their development is simply too dangerous because they would lower the barriers for use. In 2005, the administration of US President George W. Bush had to abandon plans for the development of such mini-nukes.

In the current Nuclear Posture Review, which guides US nuclear weapons doctrine, it states that the military capabilities of the warheads are not to be altered. "And that's true" says Kristensen. "But it says nothing about whether they will improve the accuracy of this weapon by putting a new tail pin on it." As in the case of the new tail guidance system on the B61. "There is a backdoor to modernization that is being actively used."

When it comes to Germany and other European countries, the B61 problem could solve itself. Germany's military, the Bundeswehr, intends to mothball its Tornado fleet in 2020. Its successor, the Eurofighter, will not be able to carry atomic weapons as it is currently designed. Modification costs would have to be paid by Germany itself. "Given the current domestic policy debates, there would seem to be little support for new airplanes," says Neuneck.

In the end, the high costs of the modernization program could ultimately kill it. That, at least, is the hope of Richard Burt, a former US ambassador to Germany and a leading member of the Global Zero initiative. "We seriously doubt whether this LEP program will be pursued to the end," Burt told SPIEGEL ONLINE. "It might well be postponed indefinitely given the reported cost overrun."

An end to the B61, whether for technical or cost reasons, would be welcome news to most experts. "US nukes in Europe have no military utility," says Burt, who as Washington's chief negotiator in 1991, was a key player in initiating talks with the Soviet Union on the START treaty. Instead, the Americans would be more likely to deploy intercontinental ballistic missiles stationed on US soil or atomic weapons based on submarines. As such, Kristensen demands in a recently published report, the US should withdraw all tactical nuclear weapons from Europe no matter what the Russians do.

ACA expert Kimball says it is "tragic that the B61s based in Europe are irrelevant to NATO's defense." He says their destructive capability is so massive that it makes their use incredible. "Neither US nor European taxpayers should be asked to waste more money to upgrade the system."