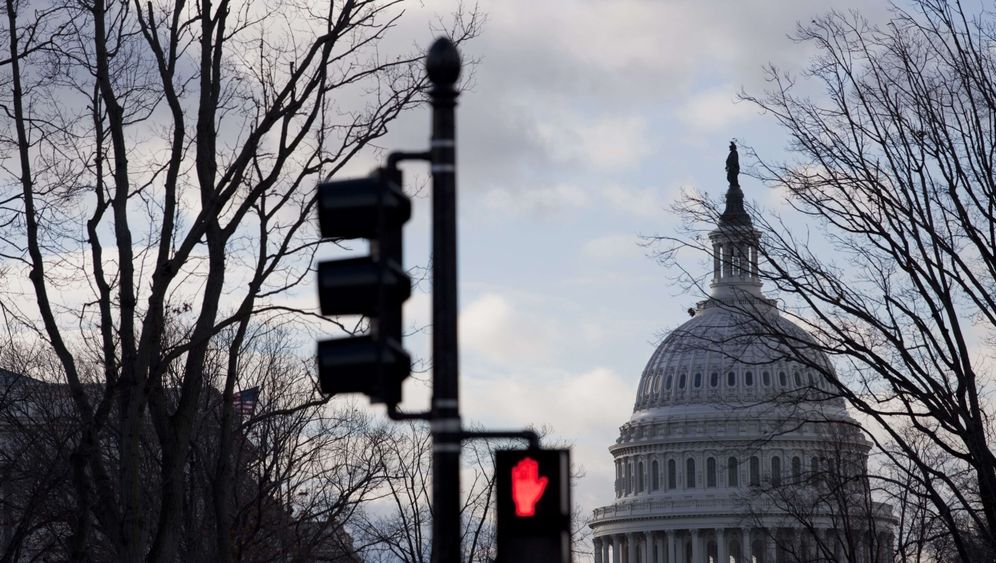 "Stop kicking the can down the road." It's the expression that seems to be most popular with politicians in the United States these days. But it's little more than lip service given that they all continue to procrastinate when it comes to solving the country's problems. Month in, month out.

The best example is the latest compromise in the budget dispute. A few rich Americans will now be paying slightly higher taxes, but is this any true and balanced plan to reduce America's debt? Far from it. The issue will be considered again in two months. Kick the can down the road.

The New York Times could hardly hide its bitterness in an editorial describing the agreement as a "weak brew that remains far too generous to the rich and fails to bring in enough revenue to deal with the nation's deep need for public investments."

The battle leading to this weak brew was, of course, led as if it were a question of war and peace. That, though, should deceive no one. Washington's last-minute compromise is far from being a breakthrough. And there will be many other last-minute negotiations in the coming months -- and even more "we've escaped this by the hair of our chins" moments. In February, for example, the country will reach its debt ceiling; shortly after that, the austerity timebomb that was just now avoided will begin ticking again.

We are, in short, witnessing a superpower losing its way in a maze of details, propelled forward by grandstanding politicians hewing slavishly to ideology. We are seeing the country of unlimited possibilities becoming one of non-stop standstill. The Disunited States of America. And this despite the long list of tasks that urgently need addressing: The country badly needs a new immigration policy, its infrastructure is crumbling and weapons laws are too lax, to name just a few.

The fundamental problem behind the stalemate is a divergence of the parties in a consensus-based system of government. Or, to be more precise, the drifting off course of one of the two parties involved: the Republicans. In the United States, the opposition also co-governs; despite not holding the White House, the weaker party often holds a majority in the Senate or in the House of Representatives, or even both. But what happens when the opposition refuses to do its part in governing?

It is difficult to run a country with the Republican Party in its current state. Negotiations over the fiscal cliff have made this abundantly clear. For fully a year and a half, US President Barack Obama has been wrestling with the Republicans over the debt and the deficit -- just to be able to bring forth this half-baked mini-deal. It was torturous, exhausting finger-wrestling. But some are already announcing their plans for revenge. "Round two is coming in a couple of months," South Carolina Republican Lindsey Graham said of the dispute over the US debt ceiling. Sounds like fun.

What is that has gotten into this party? What has become of its proud tradition -- that of the party of Abraham Lincoln, Theodore Roosevelt, Dwight Eisenhower and Ronald Reagan? These days, it is considered good form within the Republican Party not to look beyond the country's borders, to deny climate change and to practice the politics of faith rather than of expedience.

'A Catastrophic Loss of Species Diversity'

One of the reasons presidential candidate Mitt Romney lost the election to Obama in November was dubious comments he made about Latinos and women in order to attract his party's right-wing camp. But by doing so, he alienated voters at the party's center. Afterwards, the conservatives accused him of having been too centrist as a candidate. That was the problem, they argued.

It's not America itself that is ill, but rather a party. When one party in a two-party system begins to block everything, the outcome is predictable: the system falters and paralyzes itself. It's a checkmate in Washington, D.C. Congress in the legislative period that is now ending was not only the most unpopular in generations, with a mere 11 percent approval rating -- but also the most unproductive in US history.

In his recently published book "Rule and Ruin" about the "destruction of the Republican Party," historian Geoffrey Kabaservice poignantly noted: "the growth of ideologically polarized politics may prove toxic to government effectiveness and perhaps even to Americas social stability." Comparing American politics to an ecosystem, Kabaservice wrote that the disappearance of the moderate Republicans "represents a catastrophic loss of species diversity."

The division within the party was extremely apparent during the negotiations over the fiscal cliff. On the one hand, there was John Boehner, who as Speaker of the House is the de facto Republican Party leader. He is also a man of compromise. But Boehner's caucus also includes dozens of Tea Party followers, who torpedoed his negotiations with Obama. In the end, Boehner retreated.

It is telling that the deal finally reached was agreed to by two old men: Vice President Joe Biden and Republican Senate Minority Leader Mitch McConnell. Both men are septuagenarians and hail from an era in which Democrats and Republicans still did a good job of cooperating and enjoyed doing so.

On Tuesday, before the House vote, rifts in the Republican leadership became apparent. House Majority Leader Eric Cantor, the No. 2 Republican in the House and also the leader of the Tea Party movement, declared that he couldn't agree to the current compromise. Boehner, on the other hand, voted yes despite the fact that the Speaker of the House generally abstains in voting. It's possible there could still be some movement within the party. New Jersey's Republican governor, Chris Christie, for example, comes to mind. He actually dared after Hurricane Sandy to tour the regions of his state devastated by the storm together with Obama, showering the president with praise for the help he had given. The right-wing camp of the Republican Party viewed the move as high treason.

Within the right-wing camp, politicians like Congressman Cantor or Senators Marco Rubio and Rand Paul are highly esteemed. They all voted against the compromise, one that might have secured 2 million jobs and prevented a recession. They are all considered to be potential Republican Party candidates in the 2016 presidential race. Those who agree to compromises quickly lose their status as possible contenders.

That, at least, appears to be the dominant school of thought in the Republican Party -- also in 2013. 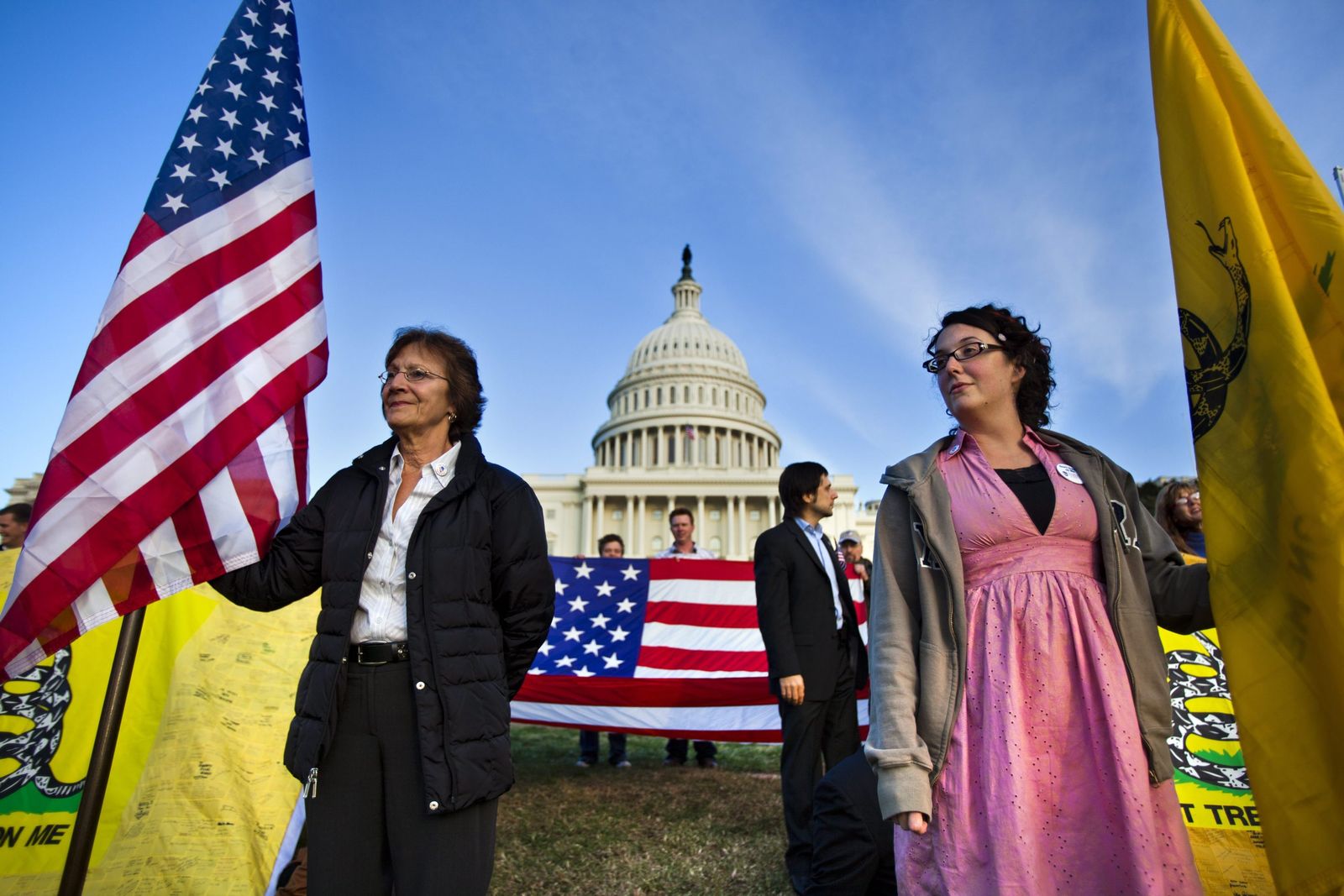 Here, Tea Party protesters can be seen standing outside the US Capitol in a November: These days, it is considered good form within the Republican Party not to look beyond the country's borders, to deny climate change and to seek political advice from a higher being on an almost daily basis.