Jon Stewart knows how to twist the knife. "So you guys are all upset we're spying on you," America's most popular TV satirist told an imaginary European audience. "But I just have one question: Have you met us? Meddling in your affairs for our national self-interest is kind of our thing."

That's no joke -- especially not this week when the tremors of the alleged US surveillance of Chancellor Angela Merkel will finally reach Washington. A German intelligence service delegation is traveling to the US capital to find answers to the array of question this scandal has thrown up.

The main ones are: What did President Barack Obama know? How can the crisis of confidence in the trans-Atlantic alliance be repaired? And what will really change in the end?

That last question can already be answered: not a lot. Over the weekend, senior members of Congress strongly defended the NSA's actions and dismissed the White House's efforts at appeasement as nothing more than superficial politeness.

Take Mike Rogers, chairman of the House Intelligence Committee, which on Tuesday plans to discuss the NSA and, probably, SPIEGEL's latest revelations. The Republican from Michigan left little doubt of how little he thinks of radical change. Mutual surveillance, he told CNN, served the "legitimate protection of nation-state interest."

Peter King, chairman of the House subcommittee on counter-terrorism and intelligence, said "the president should stop apologizing, stop being defensive." The New York Republican added that the NSA had "saved thousands of lives, not just in the United States but also in France and Germany and throughout Europe." And Germany, he continued, was a legitimate target for espionage, anyways, partly because "that's where the Hamburg plot began, which led to 9/11."

The NSA itself predictably showed the least contrition. "Would I stop doing any of that?" outgoing NSA chief Keith Alexander said in an interview with a Department of Defense blog. "Well, there's policy decisions that policymakers can do, but nobody would ever want us to stop protecting this country against terrorists, against adversary states, against cyber."

It's an attitide that newspaper editorialists shared. "Allies aren't always friends," wrote Stewart Baker in the New York Times. Steward was the assistant secretary for policy at the US Department of Homeland Security under George W. Bush, who was president when the NSA began tapping Merkel's phone back in 2002, according to information obtained by SPIEGEL. Without spying, the US wouldn't be able to carry out ts role in the world, he said. "That's just life and international politics. As German Chancellor Angela Merkel too knows quite well."

Such opinions are drowning out critical voices from people such as Democratic Senator Jeanne Shaheen, of New Hampshire. On Sunday, she told CBS that recent revelations had inflicted "significant damage" to our bilateral relations with overseas allies, adding that Americans have "repair work to do."

"And I think we have hard questions we need to ask of the NSA about what's really going on in this program," she said.

When Did Obama Know What?

There is also confusion about what and when Obama knew about the operation against Merkel. On Sunday, the NSA said in a statement that Alexander "did not discuss with President Obama in 2010 an alleged foreign intelligence operation involving German Chancellor Merkel, nor has he ever discussed alleged operations involving Chancellor Merkel. News reports claiming otherwise are not true."

The Wall Street Journal reported on Sunday evening that the NSA had stopped monitoring Merkel's phone after an "internal Obama administration review started this summer revealed to the White House the existence of the operation."

According to the newspaper, officials said the internal review turned up NSA monitoring of some 35 world leaders. The White House cut off some monitoring programs after learning of them, including the one tracking Merkel and some other world leaders, the paper said, citing information provided by a senior U.S. official. Other programs have been slated for termination but have yet to be phased out completely, officials told the paper.

In the summer, Obama announced two NSA reviews, an internal and an external one. But that was just a reaction to the monitoring of US citizens. SPIEGEL's revelations give these reviews new relevance.

Did the NSA Decide on Its Own?

Even if Obama didn't know, it wouldn't look good. A government leader who doesn't know what his intelligence agencies are up to looks weak. "These decisions are made at NSA," the government official told the Wall Street Journal. "The president doesn't sign off on this stuff," the official added, noting that the protocol was under review.

Even former Secretary of State Hillary Clinton doesn't appear to have been informed about the spying. In a a speech at Colgate University in New York last Friday, she called for a "full, comprehensive discussion" but added that the revelations were "in bits and pieces" that weren't "in context."

The White House remains tight-lipped. It confirmed that there are some ongoing internal investigations regarding intelligence surveillance operations in allied countries, but it didn't go into detail. Obama remained silent and spent his Sunday with a visit to church and a four-hour golf game. 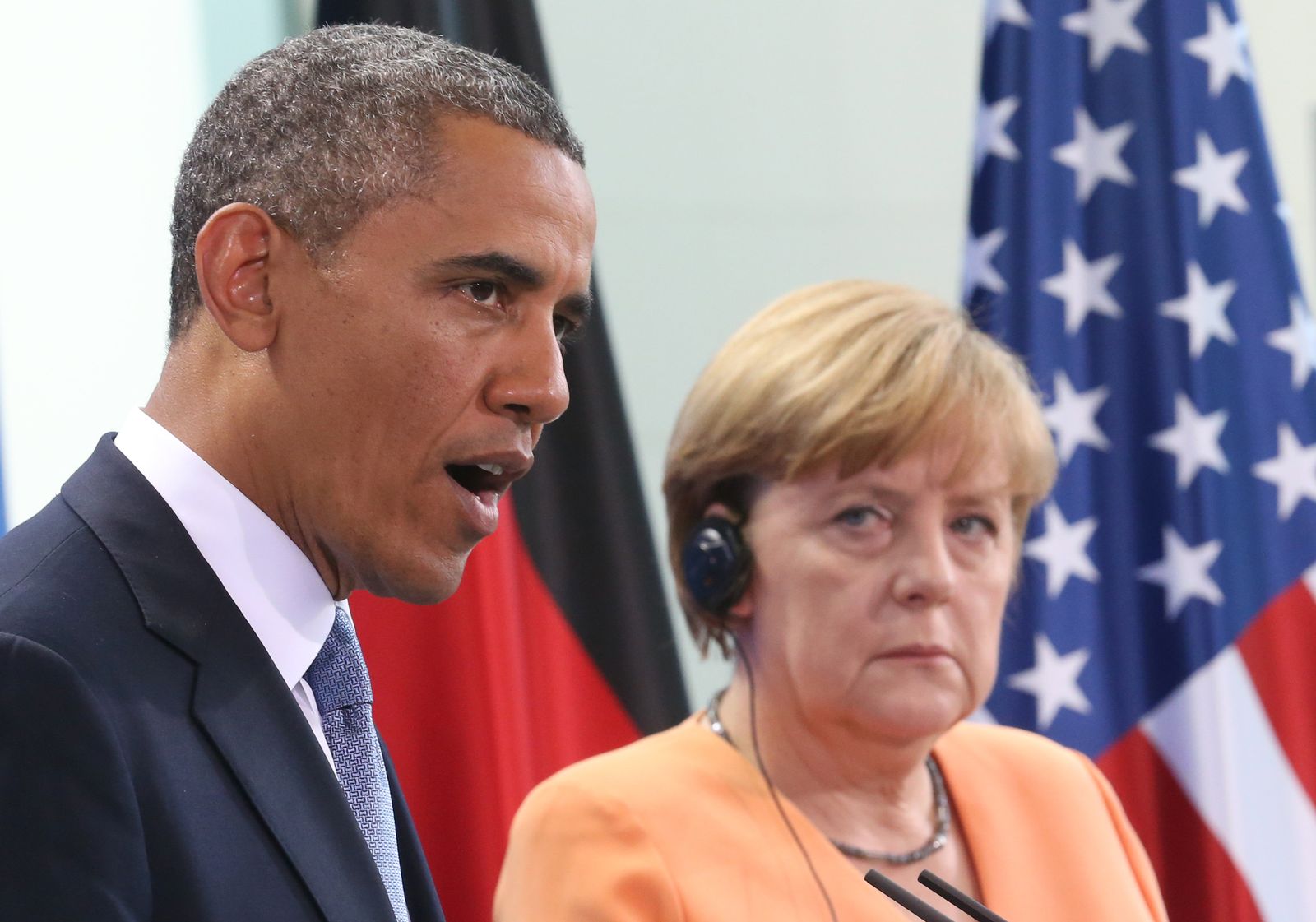 Barack Obama with Angela Merkel during his visit to Berlin in June 2013.