America's Founding Fathers thought of everything. They wanted to establish several centers of power in Washington rather than just one. They wanted the occupant of the White House to be strong, but Congress was to have the power to check that strength. The friction between Capitol Hill and the White House -- a product of this system of checks and balances -- was to make the decisions of America's leaders cleverer, wiser and better.

But the system only works when all branches of government play the role designed for them. For almost 235 years, the system worked reasonably well. But, about a year ago, things started to go wrong in the US capital; the system began to melt down. The friction is no longer propelling the country to greatness, rather it is hastening its decline. Members of the right-wing conservative Tea Party movement, which is well represented in Congress since the last elections, want friction. But at the expense of results.

These lawmakers no longer view themselves as part of the political system. Instead, they identify themselves as its enemy. They see themselves as outsiders, even as they sit in Congress and enjoy the kinds of job benefits they would like to strip from their fellow Americans.

All Take, No Give

They are, as has become clear during the ongoing debt debate, calling the entire system into question. And they have turned the system of checks and balances into a tool of obstruction.

Experts agree that America can only reduce its vast mountain of debt by both cutting expenditures and raising taxes -- at least a little. Tea Party politicians are eager to slash spending, but they are adamantly opposed to allowing the government to increase tax revenues. Their refusal to compromise has led economists to warn of " Armageddon" should the US become insolvent.

And they could still cause the deal announced by President Barack Obama late Sunday to collapse if it fails to get enough votes in the House.

In response to such "fear mongering," the Tea Party group Campaign for Liberty wrote on its blog that, even if the debt ceiling isn't raised, "the sun will still rise in the East and set in the West, as it has for all time." What, after all, do the experts know?

As a result, America has come to a standstill. The branches of government were designed to both exercise and yield power. More than anything, though, they are supposed to work together. But working together would appear to be contrary to the Tea Party movement's creed. Members aren't interested in making Washington better, they want to annihilate it. Their Holy Grail is a stripped down state.

Indeed, after talks with Republican leaders broke down last Friday, a visibly annoyed Obama asked reporters: "Can they say yes to anything?" The answer is no, and the blame lies with the new system.

It used to be that politicians would campaign on anti-Washington platforms, but would still be proud of being in Congress once elected. But the representatives who road the Tea Party wave into Washington do things differently. As a recent article in the New York Times noted, several of them actually live and sleep in their offices "so as to pronounce themselves detached from the culture in Washington" and then fly back to their constituencies on Thursdays. It's a matter of principle. They view themselves as being on a mission and proudly claim to not think about their re-election chances. They are focused on their principles.

Yet, in so doing, they are betraying the principles of democracy. It is in the nature of democracy to think about re-election. It means politicians remain in touch with their voters -- and it keeps them open to compromise.

But the Tea Party is opposed to compromise, that lubricant of all legislative bodies. They practice a form of democracy, but in its rawest, most aggressive form.

They have, for example, repeatedly and publicly humiliated Republican Speaker of the House John Boehner. Boehner had hammered out a deal with President Obama involving $4 trillion (€2.8 trillion) in federal spending cuts, including a long-overdue reform to the overburdened social system. In return, Boehner agreed to some tax increases. It would have been a genuine reform -- a rather major one.

The Tea Party, though, saw the deal as a betrayal. Taxes, after all, are poison according to their doctrine. It is an extremely fundamentalist doctrine, and they have used it to take the Republican party hostage. In the past few wild weeks, not only Washington has been in its grip, but the whole financial world.

The Republican Party "has been infected by a faction that is more of a psychological protest than a practical, governing alternative," writes conservative New York Times columnist David Brooks. He says the movement is driven by protest reflexes and "do not accept the logic of compromise, no matter how sweet the terms."

With its stubbornness, the Tea Party is betraying its own idols. They like to quote Ronald Reagan, famous for saying that "government is not the solution to our problems; government is the problem." But even he didn't shy away from governing. He raised taxes 11 times and upped the debt ceiling 18 times. The Republican icon spoke often about his dislike for government, but he never made it into a religion.

The Tea Party, on the other hand, is the Congressional outgrowth of "you're either with us or against us," the maxim that former President George W. Bush espoused as he launched his "war on terror." And the movement wants to drive the state into bankruptcy, consequences be damned.

Tea Party lawmakers themselves will ultimately have to pay the price for this strategy. Polls indicate that many Americans are put off by the radicalism of these wild new politicians and want to see a compromise reached on the debt ceiling. A majority backs a deal that includes lower expenditures and more taxes. It makes people nervous that Tea Party adherents act as though America can choose whether or not to pay back its debts.

The Tea Party has perhaps won a battle by succeeding in making tax increases taboo in the new compromise. But they could lose the war in the long run.

Most Americans, after all, are also familiar with the Founding Fathers that the Tea Party movement is so fond of citing. And what did Jefferson, Washington, Madison and the others say when their young republic was forced to borrow money? The state, they said, had to pay its debts. On that point, they knew no compromise. 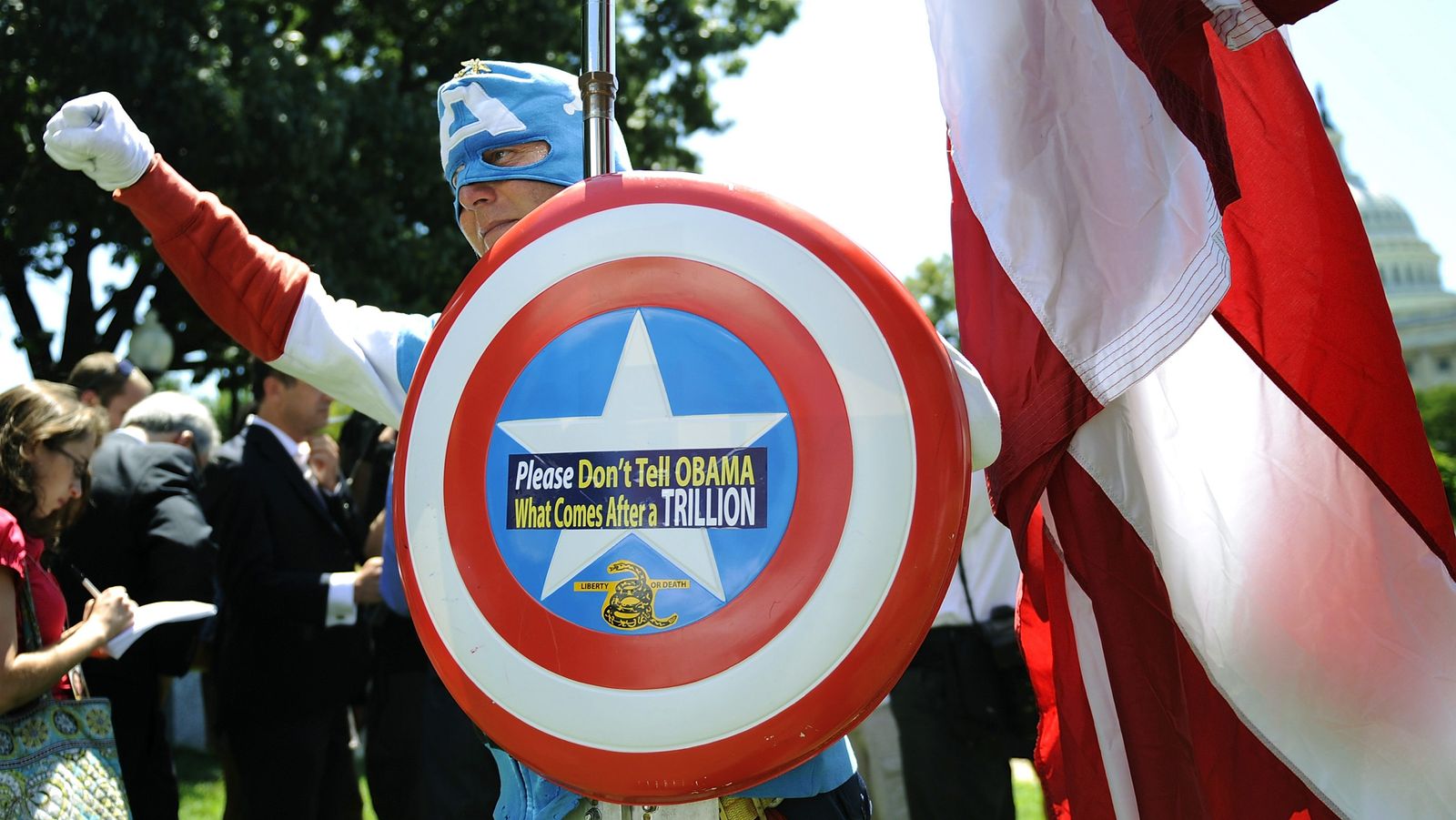 A Tea Party movement supporter dressed as Captain America at a recent rally.