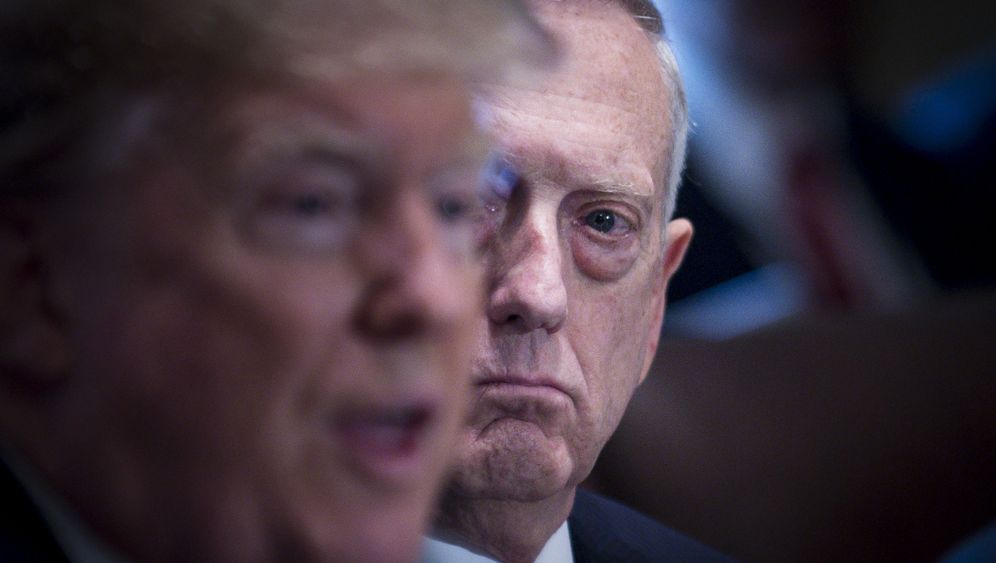 When NATO's Nuclear Planning Group assembles, the highest level of classification is applied: "Cosmic Top Secret." Even defense ministers from the alliance are required to turn in their mobile phones before entering the small, windowless meeting room at NATO's headquarters in Brussels. Aside from the ministers, only a few advisers are allowed in.

A frequent participant describes the atmosphere in the nuclear meetings as reverential. It's "almost like in a church," he says. There's no chumminess on display and no jokes are made. "The focus is on nuclear deterrence, the holy grail of the alliance, in a manner of speaking," says another military man. "Everybody keeps a straight face and sits up straight."

Such was the atmosphere four weeks ago when the group gathered to hear carefully prepared remarks from U.S. Secretary of Defense James Mattis. He had shared material with alliance partners through their intelligence agencies - and that material was enough to ensure that the meeting would be a sensitive one. According to evidence gathered by U.S. intelligence, Russia is in the process of secretly deploying nuclear-armed medium-range ballistic missiles.

The comments Mattis delivered in the meeting pertained to an issue that the U.S. has been concerned about for several years. For some time, Washington has believed that Russia is in violation of the Intermediate-Range Nuclear Forces Treaty (INF Treaty), which bans medium-range nuclear missiles. With the help of satellite imagery, the U.S. believes it is able for the first time to prove that Moscow has developed a new ground-launched, nuclear-capable cruise missile known as the SSC-8. Washington claims to have observed at least two operational units outfitted with the cruise missiles.

Should the U.S. information prove accurate, it would be a severe blow to one of the pillars of European security: the INF Treaty. It was signed 30 years ago by Soviet leader Mikhail Gorbachev and U.S. President Ronald Reagan and called for the destruction of all ground-based launch systems for nuclear warheads with a range of between 500 and 5,000 kilometers. An entire category of weapons was eliminated at the stroke of a pen. It was a milestone of disarmament.

As early as 2016, at the NATO summit in Warsaw, the alliance called on Russia "to preserve the viability of the INF Treaty through ensuring full and verifiable compliance." Just over a year later, American patience seems to have run out and they are no longer satisfied with simple appeals.

Washington has now issued its allies an ultimatum: By the alliance summit in the summer of 2018, Mattis said at the recent top-secret meeting in Brussels, NATO must find a common position on forcing the Russians to return to INF Treaty compliance, with coercion if necessary. Should NATO prove unable to agree on a course of action including possible punitive measures, the United States, Mattis threatened, would push ahead on its own. "What it would mean for the U.S. to go it alone under a White House led by Donald Trump is something nobody wants to think about," said one NATO diplomat.

Not all alliance members agree, however, that sufficient proof exists of Russia's alleged violation of the treaty. To protect their own sources and methods, the Americans declined to share all the details, even with their closest allies. In the meeting, Mattis pointed out that other NATO member states have also obtained intelligence pertaining to the Russian developments, something Lithuanian Defense Minister Raimundas Karoblis confirmed in comments to DER SPIEGEL. "Russian deployment of intermediate-range missiles in violation of the INF Treaty has been confirmed by the Allied intelligence sources," he said in a statement.

The German government considers the U.S. intelligence material to be credible but that final proof is still lacking, said a source in Berlin. "We take the indications of a possible violation extremely seriously," says German Defense Minister Ursula von der Leyen. She says it is primarily up to Russia to "clear up the doubts about its adherence to the treaty in dialogue with the U.S. and NATO."

Berlin has placed great hopes in a mid-December meeting called by the Americans of the Special Verification Commission, a forum for looking into potential compliance issues. It is unclear, however, whether the Russians will even comment on possible treaty violations. Earlier meetings of the commission, in any case, have produced no results whatsoever.

It has slowly become clear why the U.S. has had such difficulty providing final proof of the alleged violations. Tapped phone calls and money transfers are sufficient to show that the Russians are investing in new missile technology. But simply developing mid-range rockets or ballistic missiles isn't forbidden under the treaty.

It is known that the Russians have modified a sea-launched system and tested it on land. That would be prohibited under the INF Treaty, but only if the missile tested was able to fly further than 500 kilometers. That, though, is the claim the U.S. is making, and it has presented information that allegedly backs up that claim. With the help of satellite imagery, for example, the U.S. believes it has determined how large the new, nuclear-armed missiles are. And the formula has long been: The longer the cruise missile used, the further it can fly.

Even as NATO remains unclear as to the military importance of the new missile's development, member states agree that it represents a violation of trust. How, though, should the alliance react? With pressure or with dialogue?

For several months, a "non-paper" has been circulating among member states in which more than three dozen responses to a possible treaty violation are listed. The more moderate responses are marked in green while the more severe are in orange. Among the latter are such measures as a higher level of readiness, a more frequent rotation of nuclear-capable B-2 bombers or an upgrade of NATO's missile defense systems.

But it is the red-marked options toward the end of the paper that read like horror scenarios to many Europeans. One option calls for the U.S. to develop new medium-range missiles itself. For the missiles to have the desired deterrent effect on Russia, though, they would have to be stationed in Europe - just like during the Cold War. A joint signal needs to be sent that a Russian violation of the treaty comes with a military price, says an adviser to Mattis in Brussels. It would be the beginning of a new arms race.

And it would mean a return to the logic of the Cold War. When it was passed, the INF Treaty was a clear sign that the Cold War confrontation between the East and the West had come to an end. It may only have been signed by the Soviets and the United States, but it was aimed at protecting the entire European continent. The signing in 1987 was also a product of the NATO Double-Track Decision: In reaction to the Soviet deployment of SS-20 missiles, the West stationed Pershing II and other cruise missiles in Europe, but coupled the move with an offer to the Soviet Union to discuss the elimination of this category of weaponry.

Should the Americans be seriously considering stationing medium-range missiles in Europe, it would put Germany in an extremely difficult position. Hundreds of thousands of people took to the streets to protest the NATO Double-Track decision in the early 1980s and in the end, it cost Chancellor Helmut Schmidt his job. A nuclear rearmament would divide German society even more today.

But even as the Americans and Eastern Europeans continue discussing appropriate counter-measures, Russia's motives remain unclear. American hardliners claim that Moscow is preparing for a possible invasion of the Baltic states by Russian troops. The SSC-8 would then prevent the British, Germans or French from coming to the aid of their Lithuanian or Latvian allies. Paul Selva, vice chairman of the U.S. Joint Chiefs of Staff, though, has rejected that theory. He doesn't see Moscow gaining "any kind of advantage in Europe" with the SSC-8.

It is known, though, that the Russians have asked Washington several times since 2005 about jointly agreeing to withdraw from the INF Treaty. Their argument: It only applies to the two former superpowers and not to those in Russia's immediate neighborhood like China or Pakistan. The Americans have always said no.

Nevertheless, there are also those in Washington who regard the INF Treaty as unnecessary self-restraint. Republican critics of Russia, such as the hawkish senator Tom Cotton or former representative Mike Rogers, are openly suggesting that nuclear rearmament would be good for U.S. security - and for its defense industry. They regard the INF Treaty as a hindrance - when it comes, for example, to developing new weapons for Prompt Global Strike, the effort to develop a system that would allow Washington to strike anywhere in the world within an hour. The justification for the program is that it would help the U.S. military to fight global terrorism. And cruise missiles are on the wish list.

And then there is the weapons race with China. In April, Admiral Harry Harris, the U.S. military chief in the Pacific, said that while he was sympathetic to disarmament, he still found it "problematic," that the INF Treaty limits "our ability to counter Chinese and other countries' cruise missiles, land-based missiles."

Congress backed the 2018 defense budget with a large majority, a budget that earmarks $58 million for the development of land-based cruise missiles. While that would not contravene the INF Treaty, it would be a first step in that direction.

But Washington first has to persuade its European allies. The American Enterprise Institute, a neoconservative think tank, has already demanded that the U.S. government intensify its "public diplomacy." It is important to highlight "Russian exercises, threats and violations of the INF Treat," the institute argues, in order to "generate the political and public support" necessary to support rearmament with cruise missiles.

But why would allies trust the erratic Trump with nuclear weapons in Europe? Even fellow Republican Tom Corker fears the U.S. president could start a third world war.

Even regardless of Trump, nuclear diplomacy is particularly treacherous. Jimmy Carter once tried to convince the Europeans of the necessity of a U.S. decision regarding the production of nuclear weapons - and managed to turn everyone against Washington.

The issue, after all, raises many questions that are basically impossible to resolve. If the Europeans were to agree to the stationing of mid-range weapons, for example, would they then also have a say when it came to choosing targets and launching them? Who exactly makes the decision about their use?

That is why the German government is showing extreme care on the issue. This week, the Americans had wanted to see the NATO council issue a statement including a sharp rebuke of Russia for breaching the INF Treaty. But Berlin took the lead in ensuring that the alliance did not adopt an official position on the issue. And the statement ended up in the garbage bin.

The Russians and the Americans are in the process of undermining the disarmament successes of the 1980s, Foreign Minister Sigmar Gabriel said this week at a foreign policy event in Berlin. He warned against a "Cold War 2.0". "We could be facing the immediate danger of another, perhaps even nuclear, arms race," he said.

Other allies, particularly the Baltic States, do not share these concerns. Russia's sabotage of the INF Treaty is regarded as a "serious challenged posed by the Russian Federation to security on the European continent," said Karoblis, the Lithuanian defense minister. It is a challenge, he says, "which NATO will have to address through diplomatic and military measures."

And with that, the Russian president would seem to have achieved one of his most important goals: dividing NATO.