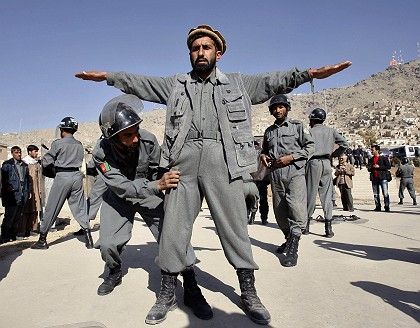 Afghan police stage a demonstration to mark the end of a five-week training course taught by a German team.

Speaking to the US House of Representatives Armed Services Committee Tuesday, Gates had sharp words for the US's NATO allies. "I am not ready to let NATO off the hook in Afghanistan at this point," he said, talking of his "frustration" at "our allies not being able to step up to the plate."

Gates indirectly criticized Germany, without mentioning the country by name, saying: "The European effort on the police training has been, to be diplomatic, ... disappointing." Since 2002, Germany has been responsible for coordinating the establishment of a professional Afghan police force. Gates described the police force as suffering from "corruption and illiteracy."

According to Gates, one of the most pressing needs in Afghanistan is for about 3,500 extra trainers for the Afghan police. The US has had to divert some of its trainers from the Afghan army to the police, because the EU did not come through, he said. Gates said he would push for more resources, particularly to train Afghan security forces, at a meeting in Scotland this week with NATO defense ministers.

The EU launched a police mission in Afghanistan -- known as Eupol Afghanistan -- in June 2007 under German leadership. The mission, which is headed by the German Jürgen Scholz, is aimed at building up and training the Afghan police force.

However, the EU trainer numbers fall far short of what Gates says is necessary. The EU has agreed to send 195 police trainers from 25 member states. By the beginning of November, however, not even half of them had arrived in Kabul. Germany currently has a mere 40 or so trainers on the ground. Even plans to increase numbers in 2008 will only bring the level up to around 60 trainers.

Gates' stern remarks are the latest manifestation of the Bush administration's frustration with what it sees as an overly passive NATO reponse to the Taliban. US officials have repeatedly called on other NATO members to provide more troops as well as military and police trainers -- without much success.

In equally frank testimony to the committee, Adm. Mike Mullen, chairman of the Joint Chiefs of Staff, said the US military was limited in what it could do in Afghanistan because it was stretched by the Iraq war. "In Afghanistan, we do what we can. In Iraq, we do what we must," said Mullen. "The war in Afghanistan is, by design and necessity, an economy-of-force operation. There's no getting around that. ... Our main focus, militarily, in the region and in the world right now is rightly and firmly in Iraq."

The US currently has some 160,000 troops in Iraq and around 26,000 in Afghanistan. Around half of the US troops in Afganistan form part of NATO's 40,000-strong security assistance force, with the rest performing roles ranging from training to counter-terrorism.

Gates qualified his criticism of NATO allies by praising British, Canadian and Australian forces, saying they had "more than stepped up" in combat roles in Afghanistan's violent south. "We should not use a brush that paints too broadly in terms of speaking of our allies and friends," he said. Germany's troops, however, are stationed mainly in the relatively peaceful north of Afghanistan -- something which has been criticized by Germany's allies in the past.

Gates also said he hoped an international envoy would soon be found who could improve the coordination of aid and reconstruction efforts in Afghanistan. "A strong civilian representative is needed to coordinate all nations and key international organizations on the ground," said Gates. British politician Paddy Ashdown, an ex-soldier and a former UN envoy to Bosnia, is one of the favorites for the position.