SPIEGEL ONLINE: Ambassador Burt, you served as the chief American negotiator in hammering out the first Strategic Arms Reduction Treaty (START) in 1991 between the United States and the Soviet Union, which marked a milestone in nuclear disarmament. Is the world safer today than it was 20 years ago?

Burt: In the Cold War, there was the risk of a massive nuclear conflict between the superpowers and their allies. Now you don't have the risk of a huge conflict, but you have a much greater likelihood that nuclear weapons could actually be used on a smaller scale. The damage may not be as great, but we're still talking about the potential of killing many millions of people.

SPIEGEL ONLINE: In 2007, when current Finance Minister Wolfgang Schäuble was Germany's interior minister, he said that it was only a matter of time before terrorist launched an attack using nuclear weapons -- and that one shouldn't waste the remaining time just thinking we're doomed.

Burt (chuckles): That may be an exaggeration. I do think the risk that nuclear weapons will be used is growing. And there's not simply the very real terrorist threat. As proliferation proceeds, deterrents could break down. Between the United States and the Soviet Union, there was an ideological and a strategic competition, but ethnicity, historical rivalries and the kind of hatred that can build up between neighbors did not exist. But if you look at India and Pakistan, you could actually see how a small-scale conflict could actually escalate to the use of nuclear weapons. That's why the spread of nuclear weapons into unstable regions is so dangerous.

Burt: The problem with Iran is not that there is necessarily going to be an Israeli-Iranian nuclear conflict. In fact, I think the Israelis would probably deter the Iranians from using nuclear weapons. But the danger is that once Iran acquires these weapons, there's the potential for a cascade of other countries to do the same. Turkey, for example, would be very likely to acquire its own nuclear weapons if Iran went that way; Egypt and Saudi Arabia, too. What we could see is a dangerous Sunni-Shite nuclear arms race -- and that is very worrisome.

SPIEGEL ONLINE: Israel's government has made it clear that it will prevent Iran from obtaining nuclear weapons -- and, if necessary, through military means. If their efforts should fail, how big do you think the risk is that a misunderstanding in a crisis situation could trigger a nuclear war?

Burt: During the Cold War, you had a hotline between the United States and the Soviet Union. People could talk to each other, and you knew who to call and who you were going to talk to. But who do you talk to in Iran? President Ahmadinejad? Ayatollah Khamenei? In Iran, it's never quite clear how decisions are taken and who is really in charge. And, frankly, Iran is not the only country in that condition. Take Pakistan, which already has a nuclear arsenal and (is) rapidly building additional nuclear weapons. Who's in charge of them? Is it the Pakistani president? The prime minister? The military? It's not clear.

SPIEGEL ONLINE: Your colleagues at the Nuclear Threat Initiative recently released a global "Nuclear Materials Security Index" that shows just how poorly secured nuclear weapons are in many places. What can the United States do to make nuclear arsenals like the one in Pakistan more secure?

Burt: There is probably no more important manifestation of state sovereignty than a country's nuclear stockpile. So the answer to your question is: very, very little. What the United States can do is provide the Pakistani military access to technology that would make it more difficult for nuclear weapons to be stolen or somehow used. Or you could offer technological support in the physical protection of nuclear weapons. But, on these kinds of issues, governments tend to be very suspicious (and) sometimes even paranoid. The honest answer is: We probably know a lot less about the Pakistani nuclear arsenal than one would think.

SPIEGEL ONLINE: At the recent Munich Security Conference, the "Global Zero" initiative you head called for all of the tactical nuclear weapons based in Europe to be withdrawn. What dangers do these weapons present?

Burt: First of all, these weapons are deployed at combat bases in a kind of Cold War configuration so they could be quickly used in a conflict. We know that there is always the problem of miscommunication in a crisis. Deploying nuclear weapons on a military base with aircraft or missiles raises the likelihood that those weapons could somehow be used in a crisis. Secondly, 500 to 600 weapons are spread out in the western part of Russia adjacent to the borders of countries like the Baltic states. They are potentially targets for either a terrorist seizure or an elaborate plot by criminal groups. These weapons should be taken from these bases, moved further east and stored in much safer and securer facilities. We're also talking about removing the 200 or so US weapons still deployed in European countries, including Germany.

SPIEGEL ONLINE: What could terrorists do with uranium or plutonium? Having such materials is one thing, but building a nuclear bomb with them is a completely different matter.

Burt: The problem is that the know-how for building a crude nuclear weapon exists on the Internet. The big bottleneck is obtaining the necessary fissile material, whether it's enriched uranium or plutonium. If you're able to acquire this, you can build a nuclear bomb.

SPIEGEL ONLINE: But one would still have to get it over the border and ferry it to the target.

Burt: Look at the problems the United States has in keeping illegal drugs out. We're talking about tons of marihuana and hundreds of kilograms of heroine and cocaine! And it turns out that, as scanners are beginning to be deployed in American harbors, enriched uranium is not at all easy to detect. It isn't just a question of delivering a nuclear weapon with a long-range missile. You could also bring a crude nuclear device into a country or a harbor and detonate it in a large city.

SPIEGEL ONLINE: Let's assume that terrorists actually succeed in detonating a nuclear bomb in a large city. Would the consequences really be as drastic as some doomsayers claim? For example, after World War II, almost all of Europe -- rather than just a single city -- was lying in ruins. But, 20 years later, the worst setbacks had been overcome, and the economy had picked itself back up.

Burt: That's a good point. But the alternative case is the reaction to 9/11 in the United States and other countries. A few thousand people were killed, but it had a huge ripple effect around the world. The reason why the World War II analogy doesn't work is that people understood that the war was over, and they had the opportunity and ability to rebuild. But if even a crude nuclear bomb was detonated in a city, it would have a real psychic impact. It would create fear that would proliferate to every major urban area, where people would be asking themselves: "Are we next?"

SPIEGEL ONLINE: But wouldn't the fear also dissipate at some point?

Burt: Perhaps. But first you get the inevitable overreaction of governments. If a nuclear weapon was used in, say, New York City, and three, four or five hundred thousand people were killed, the American people would put overwhelming pressure on their government to make sure this couldn't happen again. As a result, we would risk losing all our civil liberties. The Bill of Rights, the freedom of the press, the freedom of speech -- all of that would probably quickly disappear as people insisted on a police-state kind of security. That, in my view, is the greatest danger of terrorism on that scale.

SPIEGEL ONLINE: But how likely is it that we can put the nuclear genie back in the bottle?

Burt: You will never be able to get rid of the nuclear know-how, of course. But governments -- and principally the states with nuclear weapons -- need to begin a process of progressively reducing their force levels. The United States and Russia would have to act first, bringing their strategic arsenals down to as low as 1,000 nuclear weapons. If you could get to that level, it could be possible to bring other countries to the table.

SPIEGEL ONLINE: Still, as the examples of Iran and Pakistan have shown, no amount of persuasion is going to stop someone really intent on getting their hands on the bomb from doing so.

Burt: To get down all the way to zero nuclear weapons -- and we're talking about a process that would take at least two decades -- governments would have to put into effect a very intrusive and rigorous verification (regime) on a multilateral level. And you would need a kind of United Nations Security Council agreement that. If cheating was detected, the international community as a whole would be prepared to take action in the form of sanctions and, if necessary, military force. 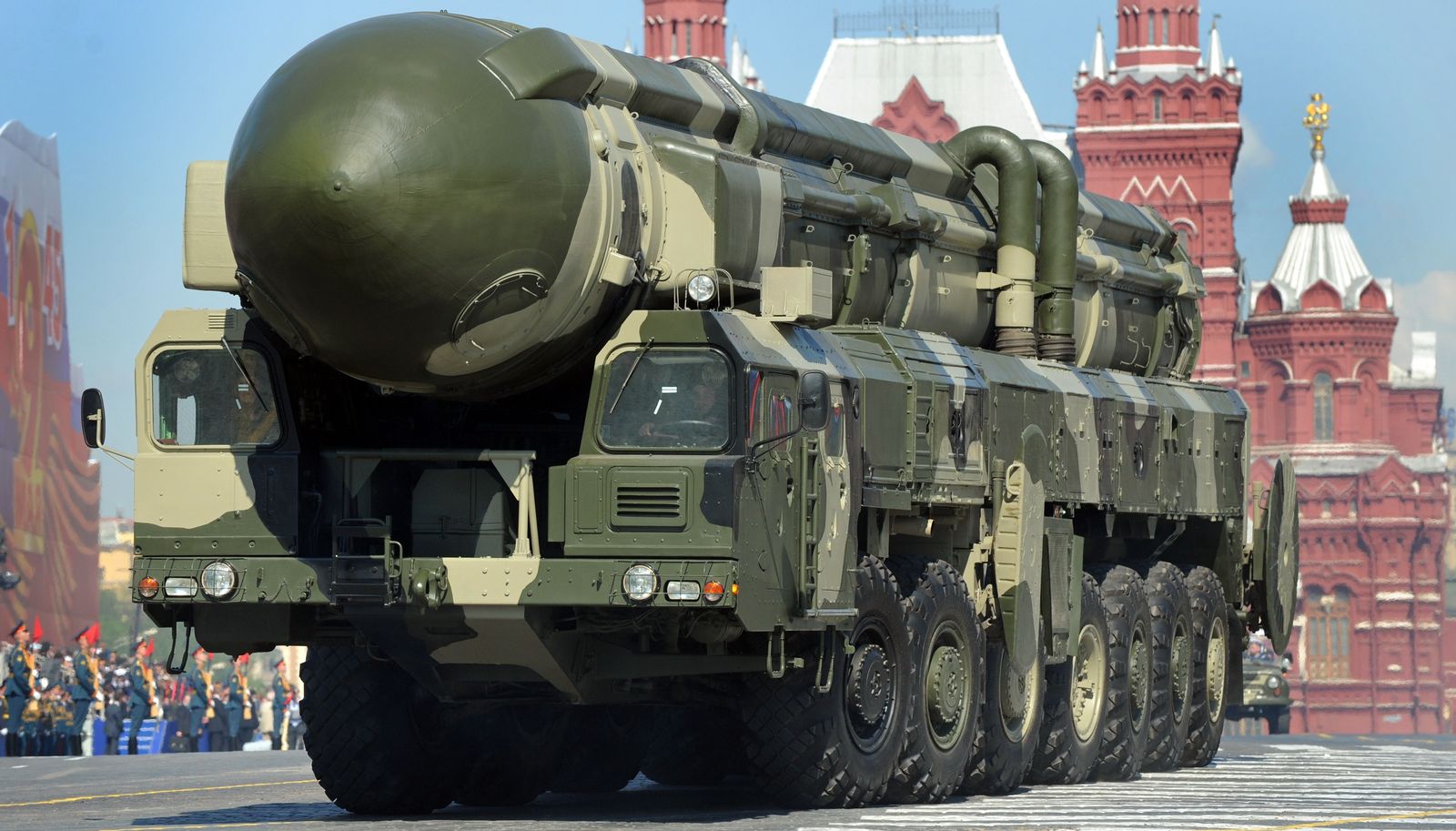 A Russian intercontinental ballistic missile is driven through Moscow's Red Square in 2009.