SPIEGEL: With the turmoil on the global stock markets, is the world staring into a new financial abyss?

Rogoff: Mainly, the markets are simply adjusting to the reality of a continuing slow and halting recovery. They realize there will be no boom anytime soon. Wall Street forecasters, and many central banks, had been starting to think that there was going to be a sharp uptick in the recovery. But they have got this wrong again and again because they keep wanting to use normal postwar recessions as a frame of reference. But this is a post-financial-crisis recovery, a rarer and very different animal.

SPIEGEL: What effect has that perception had?

Rogoff: The mentality that this is just a big recession, "the Great Recession," has led to wrong policy decisions, such as the premature end of quantitative easing by the US, and the belief in Europe that there is a brisk recovery around the corner that will save the day and enable policymakers to avoid tough decisions on periphery country debt. In reality, this was a different kind of downturn, which would have been better termed the "Second Great Contraction," because it involved a prolonged shrinking of overextended global balance sheets and a tightening of the credit system. Right now, the recovery from this needs more monetary stimulus, especially in the US.

SPIEGEL: Is that likely? The current debate in the US is focusing on cutting back government expenses and reducing debt. Would higher inflation be a way out?

Rogoff: If you happen to be on the board of a central bank, you have to be willing and able to stand up to popular opinion. Many people even consider moderate inflation heresy. But we are in a perfect storm here. I am not saying we should have hyperinflation or double-digit inflation, but I believe that central banks should accept somewhat elevated core inflation for several years, higher than the normal 2 percent. Whereas I believe monetary stimulus is coming, I am worried that it will not be forceful enough to have any material effect on balance sheets.

SPIEGEL: Does the US also need another stimulus program? Larry Summers, a former top adviser to President Barack Obama, says that cutting back on government spending in the middle of a downturn will kill economic growth and employment.

Rogoff: People asking for a fiscal stimulus are looking at the wrong model. They think this is just a big, but typical, recession. But it is not. Policymakers need to focus on relieving overextended private balance sheets in the short run, and stabilizing public debt in the long run. A fiscal stimulus cannot be the main solution. It may provide temporary relief, but there will be no traction without some normalization of private debt levels. In Europe, of course, government debt itself needs to be sharply written down in some countries. The US will eventually come to the realization that something similar has to happen to some mortgages. Homeowners who accept this relief will have to make some significant concession, perhaps giving away some future appreciation if home prices go up.

SPIEGEL: Why would a selective default for some European countries be less harmful than say, a US government default?

Rogoff: Greece, Portugal and Ireland are tiny. Greece and Portugal in particular are at the early stages of being advanced economies; they are still closer to emerging markets. And emerging markets default all the time without bringing down the global economy. If the United States or Germany were to default, it would be an entirely different matter. I don't mean the kind of technical default the US faced if Congress had not raised the debt ceiling. Had that blunder occurred, it would have been quickly corrected, albeit there would have been some lasting damage. Most likely, the US would have had to pay slightly higher interest rates for decades after. But the US situation is very different from Europe where some countries are fundamentally bankrupt.

SPIEGEL: If you look at the hysterical reaction of the financial markets, do politicians even still have a chance to rein in the power of speculators?

Rogoff: The stock markets had built in pretty rapid growth. Now they see they were too optimistic. Wall Street, the Federal Reserve and others had all bet on pretty brisk growth and that was plain wrong.

SPIEGEL: What have politicians done wrong on both sides of the Atlantic during the latest financial crisis?

Rogoff: I just cannot understand how President Obama made so many concessions in the latest negotiations over the debt ceiling. He was holding all the cards and he was still stared down by the Tea Party. He should have said: "I do not negotiate with terrorists. If you want to bring down financial markets, it will be on your head. I am going to behave normally and responsibly." Instead, he got gamed into making giant concessions, and this has weakened the presidency. Perhaps the damage will not be lasting, but then next time the president may have to prove him or herself willing to accept a short technical default rather than give in.

SPIEGEL: And the Europeans? Chancellor Angela Merkel was very reluctant to agree to a bailout for Greece.

Rogoff: It is not easy for a politician to do what needs to be done if it is unpopular. Greece needs a massive restructuring plan, Portugal as well, probably Ireland, too. Ultimately, Germany has to guarantee all the central government debt in Spain and Italy, and that will be very painful. If Italy and Spain are to be kept in the euro area, then unfortunately the Germans will have to acknowledge that Europe is going to be a transfer union for some time to come.

SPIEGEL: Is there an alternative?

Rogoff: Clearly it was a mistake to accept some of the southern countries prematurely into the euro zone, but there is now no other way to pay for their debt than through transfers. I would like to say it is only a one-time payment, but I do not think anyone in Germany still believes that and they should not. This is a long-term problem. Of course, Germany should extract major political concessions on the way, like the installment of a powerful European president or a European finance minister.

SPIEGEL: Growth is currently slowing in China as well. Where will global growth come from in the near future?

Rogoff: Emerging markets are slowing only mildly for now. But policymakers have to get the idea out of their heads that there is going to be big rebound every time we see an uptick. That will not happen as long as debt levels are so high. We may see moderate growth averaging only 1 or 2 percent in many advanced countries for much of the next three to five years. That is not the end of the world. 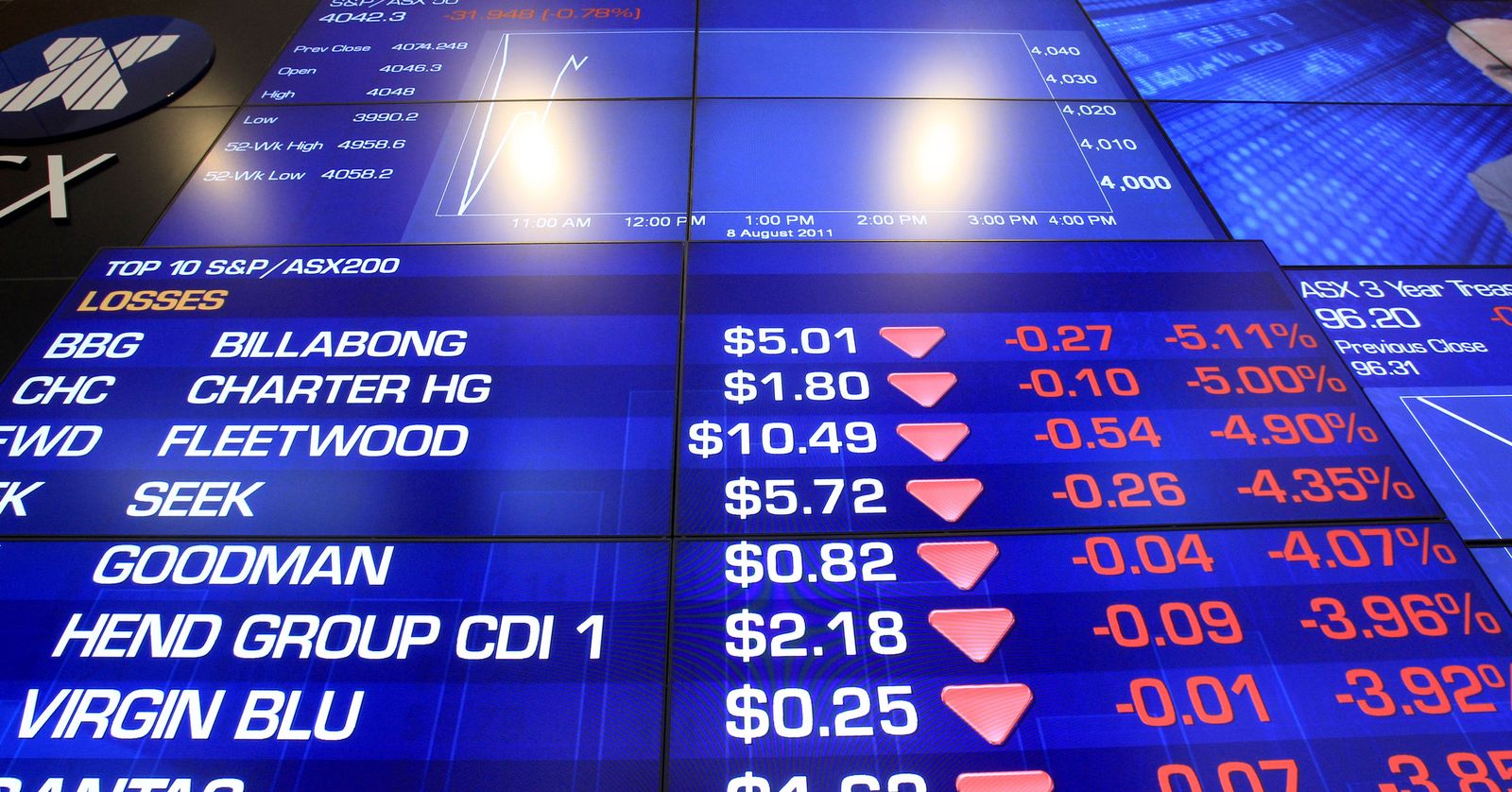 Shares on the Australia Stock Exchange, shown here, and Asian markets fell on Monday in reaction to Standard & Poor's downgrading of the US's credit rating.