General John Allen, 61, has served as special presidential envoy for the Global Coalition to Counter the Islamic State (IS) under US President Barack Obama since September. He previously served for three years as the deputy commander of the US forces in Afghanistan and Iraq.

In an interview with SPIEGEL, Allen uses the Arabic term "Daesh" when referring to IS in order to prevent having to say the word "state".

SPIEGEL: General Allen, congratulations on your new assignment. It seems that you will have a secure job for the next decade.

Allen: Yes, probably. It would seem that my employability and my employment are guaranteed for some period of time.

SPIEGEL: It took more than a decade to halfway stabilize Afghanistan. The situation in Syria seems even worse. When will you be able to say "mission accomplished"?

Allen: I wouldn't put a timeline on it, frankly. This is a difficult moment. The components of instability that we face with Daesh are found widely in the region. It's not just about Daesh, Iraq or Syria. There are broad-based undercurrents of difficulty -- social difficulties, economic difficulties, governance challenges -- that created opportunities for extremism to emerge and the radicalization of populations. So, while we are all interested in dealing with Daesh as the immediate threat, more broadly we're interested in the underlying factors that create these problems. A useful conversation to have is: How can we take action together to eliminate some of these social, ethnic, religious and economic problems that have combined in so many places? There are no short-term solutions. It's going to require concerted action by the community of nations. It's going to require ownership of the problem in the region.

SPIEGEL: President Obama has stated he wants to "ultimately destroy and dismantle" IS. Was it a mistake to set such a maximalist goal that is almost impossible to reach?

Allen: It's important to have a clear understanding of what we ultimately seek. I don't believe that the president intended to imply the "annihilation" of Daesh. That is far beyond our thinking in this regard. We want to deny Daesh the ability to have safe havens either in Iraq or, ultimately, in Syria, to preclude its capacity to organize an existential threat to those countries. Annihilation requires a great deal of investment, resources and time. The defeating, dismantling and degrading of Daesh, and ultimately destroying the idea, is the long-term objective. It's important to understand that what we're undertaking as a coalition is much bigger, much broader, than simply the military role. The military role is the most conspicuous right now and attracts the most attention. We have five lines of effort that in the end converge to degrade and defeat Daesh: providing military support to our partners; impeding the flow of foreign fighters; stopping IS's financing and funding; addressing humanitarian crises in the region; and exposing IS's true nature.

In terms of humanitarian assistance and answering UN appeals for both Syria and Iraq, Germany has been hugely generous to the Syrian people with its contributions, and that is deeply appreciated. But it's not just Syria and Iraq; the frontline states of Turkey, Jordan and Lebanon also need assistance. And as the counteroffensive in Iraq unfolds, there will be populations that have suffered terribly under Daesh that will be rescued by the Iraqi Security Forces. We're going to have to help them as well.

SPIEGEL: What's your assessment of the military situation?

Allen: The bombing campaign has slowed down Daesh's ability to gain ground, and in fact has rolled them back in many areas. In terms of strategic, operational and tactical warfare, we believe the momentum is now reversed against Daesh. Their operational momentum is now static; and, at the tactical level, we're beginning to see Iraqi Security Forces have an effect. The rest of the military campaign, which is of course of great interest to Germany, is building our partner's capacity. We want to give the Iraqis and the Kurds the military capacity ultimately to restore the territorial integrity of Iraq, and its sovereignty.

SPIEGEL: Another huge challenge is IS's propaganda. It was a brilliant move to declare an "Islamic State". How are you going to deal with this?

SPIEGEL: Islamic State is probably the financially best equipped terrorist organization in history. You won't succeed as long as the IS pays its fighters better than the Iraqi government or the opposition groups in Syria.

Allen: It's very important to limit the finances of Daesh and reduce the operational prerogatives that Daesh has to spend money, whether for salaries, or purchasing equipment, fuel or building facilities. When you want to try to act like a state, you've got to pay bills like a state. Paying salaries has become much more difficult, the military campaign has attacked elements of the oil enterprise that has begun to shrink its capacity to gain revenue from selling oil. And our campaign has been effective in limiting other activities that generate income, like kidnapping for ransom, human trafficking and selling off Syria's antiquities.

SPIEGEL: It seems that, after 1,300 air strikes, IS has adjusted to the attacks and is now making it harder to find decent targets. Would you say that the time has come for a ground offensive?

Allen: The offensive will unfold when it's ready for it to unfold. The train and equip program is intended to enable Iraqi Security Forces to deal with Daesh when the time comes. The air campaign was intended to halt Daesh's momentum and support those Iraqi forces that are already in a counteroffensive. Iraqi Security Forces and the Kurdish Peshmerga have been able to relieve the siege of Baiji, push Daesh off the Mosul Dam, successfully defeat the Daesh attack on the Haditha Dam and relieve the village of Amirli. The long-term counteroffensive will be underway as we continue the training process. Those units will feed into the counteroffensive to begin to take back the large population centers and ultimately push Daesh out of Iraq.

SPIEGEL: In Syria, there are massive complaints on the part of the moderate opposition. They feel abandoned and want to fight against Assad and not just IS.

Allen: We are in constant conversation with the Syrian Opposition Coalition, which represents many of the moderate Syrians. We hope over time that those voices will become a voice with greater political coherence. My sense is that this is their desire as well, but they're in the process of developing capacity politically. With regard to supporting moderate fighters in the field, we have to remember we only got into this in September, and from a standing start. We had been providing humanitarian, non-lethal support for some time. I can understand why they may desire to have this happen faster, but in this case, we're moving pretty quickly. Four countries have decided that they are willing to host training centers and our hope is that they should be able to start to do that relatively soon.

SPIEGEL: Do you have any perspective on how long that train and equip program will take?

Allen: I don't right now, and I'm always very careful about assigning timelines. In Iraq, we expect that, after the New Year, brigades will emerge from training, and move straight into the counteroffensive together with the substantial forces that are there now.

SPIEGEL: On the Syrian side, you're far away from that. It will take longer.

Allen: That's true. There are a couple of really substantial differences between Syria and Iraq. In Iraq, while it's been just six months since the catastrophe in Mosul, we've moved a long way in a relatively short period of time. There are obvious partners there that we don't have in Syria. We have a government under Prime Minister Haider al-Abadi, which has made some very important moves, both politically and militarily. It has a full cabinet, and a defense minister with strong military bona fides and strong executive experience. And then we have Iraqi Security Forces that are whole, intact and well led.

The moderate Syrian elements that are in the field are not a single entity. They are multiple groups that are tied together by an aspiration ultimately to be free and govern themselves, with a political system that reflects the will of the Syrian people -- and of which Bashar al-Asad is not a part. Those groups need ultimately to come together in the field under a coherent command-and-control structure. This will be part of the process we will undertake over the next couple of years in Syria, besides the train and equip program.

SPIEGEL: Who poses a greater threat to US interests -- Assad or the IS?

Allen: Assad is a menace to the region. What he has done to Syria has been the motivating factor for the rise of Daesh and Jabhat al-Nusra. So while Daesh carries its own threat to US interests, the political solution in Damascus and ultimately the departure of Assad and his ilk will be an important development for the region. That could help us return to a more stable environment in Syria. Again, if we've accomplished our objectives with respect to the political outcome, there will be a government that reflects the will of the Syrian people -- and that will have the happy second and third order effect of assisting in the creation of stability more broadly in the region. Solving the political environment in Syria will go a long way towards eliminating or at least addressing some of the underlying causes.

SPIEGEL: Assad's regime seems to be more stable since the military campaign against the Islamic State. Is it possible that the political price you will pay for defeating IS will be a stronger regime?

Allen: I don't agree with the premise of your question. Assad has experienced significant difficulties in the field in a number of areas. Things are not going well for him in the south, and he continues to suffer under enormous sanctions internationally. And while he does have some support in the international arena, he is not more stable.

SPIEGEL: Let's take a look at the region's future. Will Syria and Iraq exist in a few years as we know them today?

Allen: I think we'll see a territorially restored Iraq. The early indicators and performance of Prime Minister al-Abadi's government are very positive. There's a very interesting and positive trend in the region right now. The prime minister of Iraq was received by the Saudis, and the Saudis have called for the reopening their embassy in Baghdad. Abadi had a very good visit with the King of Jordan. Turkish President Recip Tayyip Erdogan has been to Baghdad and Erbil. And Abadi has very strong relations with the Kuwaitis. The new government just agreed to the final oil deal with Kurdistan. It's a remarkable development. People have been working on that for 10 years, and Abadi was able to do it since he came into office in September. Syria is more difficult to foresee right now, frankly. Whether we see a secular federalized Syria or something else remains to be determined.

SPIEGEL: At what point will you travel to Iran in order to coordinate the Coalition's efforts against IS?

Allen: The answer is simple: never. We do not coordinate with Iran, and we will not synchronize Coalition efforts with Iran. 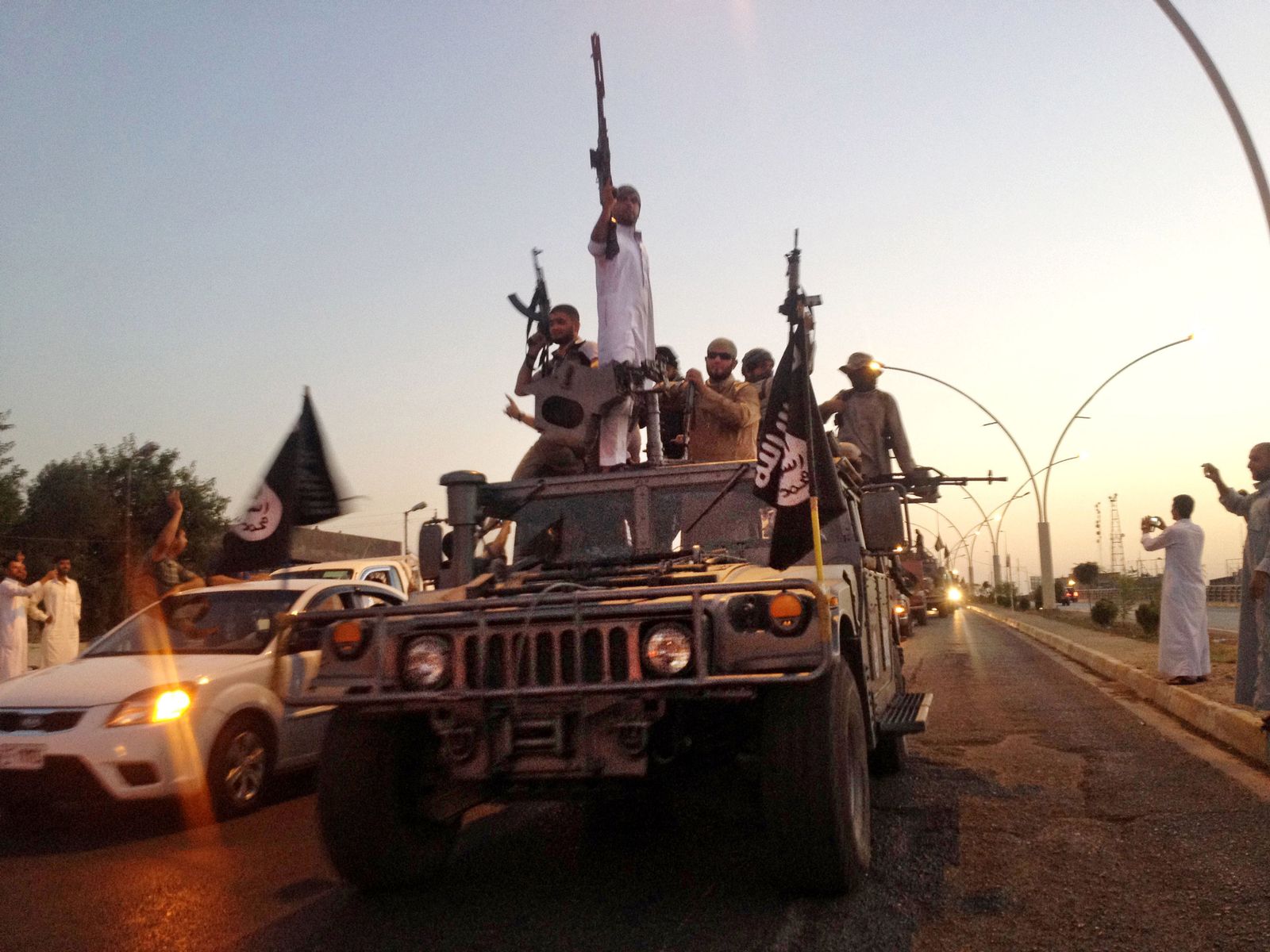 Islamic State fighters parade in Mosul, Iraq in June: "When you can defeat the idea, then you have destroyed the organization" says Obama's envoy tasked to help stop the terrorist group's menace. 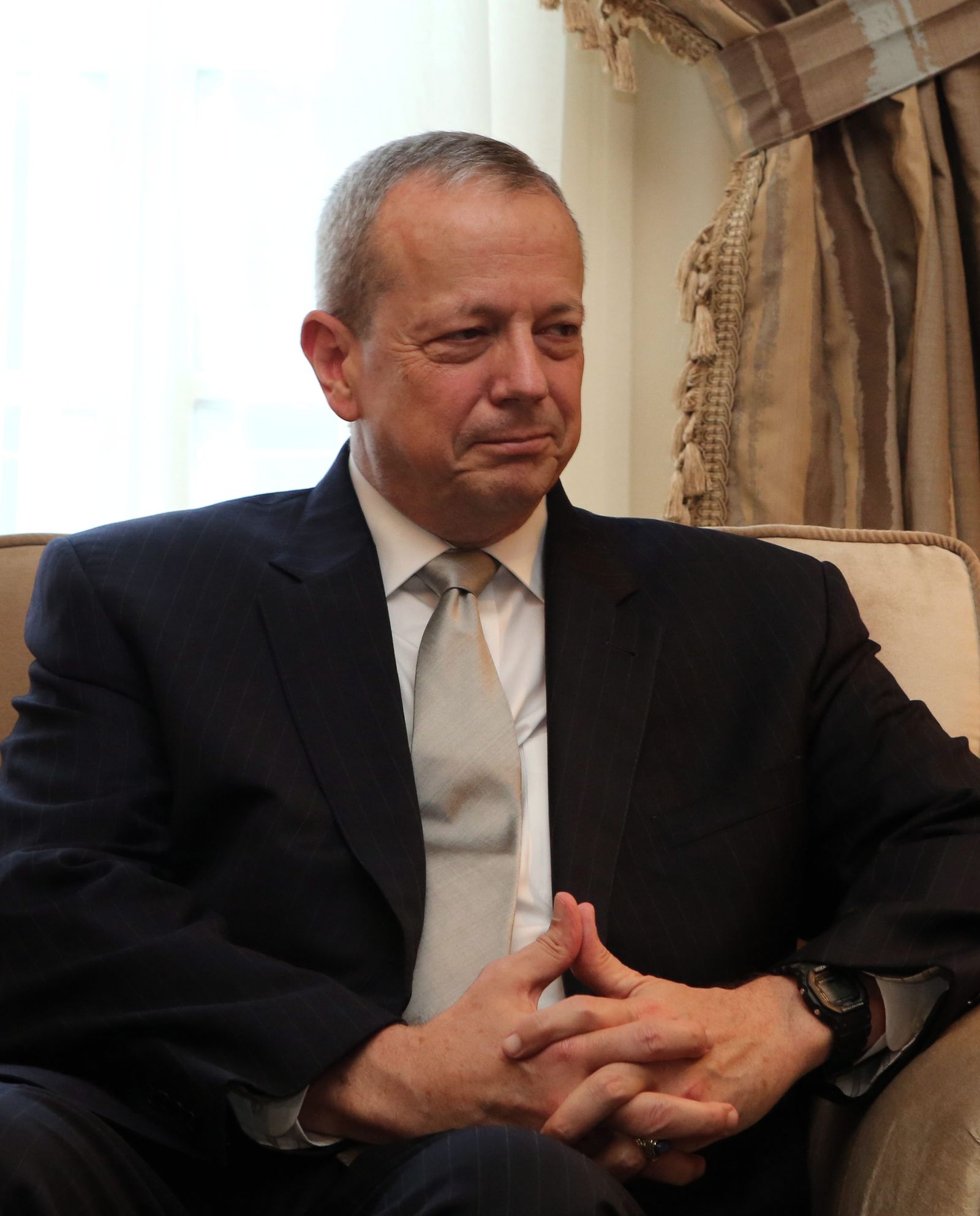 Special presidential envoy General John Allen says a ground offensive against IS "will unfold when it's ready for it to unfold."