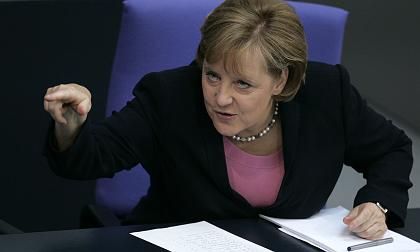 Merkel ramming home a point during a session in parliament last week.

The German government is battling to reach a joint G-8 position on climate change ahead of the June summit, with Chancellor Angela Merkel due to meet United States President George W. Bush for lunch before the meeting begins and top envoys from the world's leading seven economies plus Russia are scheduled to hold last-ditch talks on June 4.

But German Environment Minister Sigmar Gabriel of the center-left Social Democrats (SPD), who are the junior partner to Merkel's conservative Christian Democrats, said he remained skeptical about prospects for a meaningful deal to combat global warming at the June 6-8 summit in Heiligendamm. Merkel too has cast doubt on whether an agreement will be possible.

Tension between the US and German governments has been mounting in the run-up to the summit. It emerged last week that the US has sent Berlin a statement accusing Berlin of ignoring its "serious, fundamental concerns" with Germany's draft climate change communiqué for the summit.

Merkel wants a commitment from the world's richest nations to limit global warming to 2 degrees Celsius (3.6 degrees Fahrenheit) this century and to cut global greenhouse gas emissions by 50 percent below 1990 levels by 2050.

The United States, the world's largest emitter of carbon dioxide, say climate change should be tackled with technology rather than mandatory emissions targets.

Gabriel said: "The negotiations will be more than difficult. In central issues of climate protection it appears to be mainly the Americans who aren't prepared to move."

"In America, too, many people want a different climate policy," Gabriel told Frankfurter Allgemeine Sonntagszeitung. "That's why it will be very difficult to achieve success in Heiligendamm."

Meanwhile House of Representatives Speaker Nancy Pelosi, on a visit to Germany, urged Bush to forge a climate compromise and hoped he would be open to considering "a different way" in the future.

Pelosi, head of the opposition Democrats who have a majority in the US Senate and House of Representatives, said she and a bipartisan delegation of congressional leaders had visited Greenland and seen "firsthand evidence that climate change is a reality."

"We hope that we can all assume our responsibilities ... and that our administration will be open to listening to why it is important to go forward, perhaps in a different way than we proceeded in the past," Pelosi said on Monday.

Pelosi told journalists she would meet Merkel on Tuesday "to personally congratulate her, and thank her, for her leadership."

The G-8 is debating what should succeed the Kyoto Protocol, a 1997 international treaty that caps the amount of carbon dioxide that can be emitted from power plants and factories in industrialized countries. It expires in 2012.

Bush rejected that Kyoto accord, saying it would harm the US economy and unfairly excludes developing countries like China and India from their obligations. Pelosi strongly disagrees with that decision and many other of Bush's environmental policies.

Faced with US opposition to Berlin's proposals for a climate accord, Merkel was frank last week about prospects for a deal.

"I say to you openly that I dont know today if we will succeed in Heiligendamm," she told parliament in a statement outlining her goals for the summit last Thursday. "But there is no question that the leading industrial nations must make progress on this issue or we wont be able to combat climate change."

She said it was up to G-8 nations to spearhead the fight against climate change. "Only if we stride ahead will we be able to convince the emerging economies to commit to appropriate measures, without of course destroying their right to economic growth, Merkel said.

G8 communique drafts leaked to the media have shown how far apart and entrenched the positions are.

Row on Nuclear Power Too

Separately, German media have reported that the US also wants the communiqué to stress that nuclear power plays an important role in protecting the climate. The US is trying to reach a common position with Canada and Japan to push this demand through at Heiligendamm, newspapers reported. That position in turn is unacceptable to Social Democrats in the German government, who are insisting that Germany sticks to its planned phaseout of all its nuclear power plants by the 2020s.

SPD member Michael Müller, a state secretary in the German Environment Ministry, said Amercians needed to be reminded "that they themselves started the climate debate in the 1980s and bear the biggest responsibility for climate change."

In an interview with the Frankfurter Rundschau, he urged the US "not to play poker to soften up the Germans on this issue that affects all humankind."

Ulrich Kelber, deputy head of the SPD's parliamentary group, said: "In the worst case it would be better if the Europeans don't sign the communiqué at all rather than signing one that contains no concrete commitments on climate change."

In a further sign of how tough the summit looks likely to be, Gabriel sharply rebuked the Russian government for recommending that Germany halt its nuclear phaseout.

"I can do without such advice, especially from Russia -- not just because of Chernobyl," he told Frankfurter Allgemeine Sonntagszeitung. "There's no place in the world that deals with nuclear energy more irresponsibly than Russia."