During the first bidding rounds, the oil bosses were still laughing. When Iraqi Oil Minister Hussein al-Shahristani issued the first drilling contracts for foreign multinational companies at Baghdad's al-Rashid Hotel on June 30, 2009, he made clear that there would not be any sharing of profits, but rather a fixed price paid for each barrel of oil drilled.

"There was buzz in the room" during these bids, noted US Ambassador Christopher Hill.

But when the minister announced what his government actually wanted to pay, there was "stunned silence." Two dollars per barrel -- and nothing more. In addition, the companies would have to replace the Iraqis' ramshackle oil drills with new equipment. "Giggles were heard" when these figures were revealed, the ambassador wrote. Afterwards, Shahristani named the offer for other oil fields at prices that were even lower. Things grew silent.

A half a year later, in December 2009, Hill wrote a long report about the next bidding round. This time, Shahristani made even lower offers than during the first round. But that didn't stop companies for making bids at prices they would have laughed at only months earlier. In the end, bidder consortiums led by France's Total and China's CNPC secured contracts. Other companies awarded contracts were from Malaysia, Vietnam, Angola, Norway, Britain and Russia.

But there were no US companies.

Outside of the formal bidding process, only two US oil giants managed to secure contracts for other oil fields -- Exxon and Occidental.

"No Blood for Oil" had been a slogan used by protesters against George W. Bush's invasion of Iraq. A SPIEGEL cover story in January 2003 even carried the title "Blood for Oil" and analyzed Iraq's role as an oil power. Neoconservatives in Washington had always said that the money from Iraq's oil would be used to pay for the war and the reconstruction.

But the opposite came true. A lot of blood was spilled, but very little oil flowed for the US. With production of 2.5 million barrels of crude oil daily, production in Iraq has returned to close to its prewar levels. Forecasts now suggest it will take 20 years before that production is doubled or tripled, however. The US spent more than $700 billion on Iraq, but now Iraq's oil profits are going to other countries.

For almost five years, US diplomats have urged the Iraqis to finally pass a national oil and gas law. The main aim of the law was to stipulate a just sharing of oil revenues in the northern part of the country with the Kurds and to offer a level of investment security to firms doing business in Iraq. More than 50 diplomatic cables cover the wrestling over the law -- but al-Shahristani continued to hold the US at bay.

Even directly after the invasion, the US troops didn't pay close attention to the issue of oil. Plunderers began dismantling the facilities that, despite everything, still represented 90 percent of state revenues. Again and again, US diplomats living in the country that has the world's fourth-largest oil reserves complained that there was hardly any gasoline available. People had to wait for hours at gas stations, and gasoline even had to be imported from other countries.

Diplomats complained in 2007 of a "wild west atmosphere" that prevailed at the refinery in Baiji near Tikrit. "In practice the sprawling facility is jointly controlled by a number of official and unofficial actors," it reads. There was apparently a fuel smuggling epidemic.

Shortly afterward, US diplomats were also present when then-presidential candidate John McCain met with senior Iraqi government advisers. According to the cable, McCain rumbled that, "FedEx knows the location of every package it sends worldwide while the Iraqi oil ministry cannot account for 20-30% of the oil it produces."

In addition, the Iraqi oil infrastructure was collapsing across the board. Around 80 percent of oil exports run through two underwater pipelines to the port at Basra. They were built in 1975 and were only expected to have a lifespan of 20 years. In order to prevent oil from escaping into the ocean, only a quarter of the foreseen amount can still be pumped through the pipes.

The US did spend more than $100 million to at least halfway renovate a terminal at Basra. But a second one is in terrible condition, the diplomats wrote. And workers in the oil industry are paid so badly that they often have to fish in the port during their working hours.

Not until December 2009 were US diplomats able to report a kind of war dividend for the country. "Basra black gold rush begins," reads one of the cables.

At the very least, most foreign oil firms are hiring US engineers, it reads. Engineers, for example, from Halliburton -- the same Texas company that was very closely connected with the old Bush government. Vice President Dick Cheney had once served as Halliburton's CEO.

Halliburton's chief in Iraq was pleased when he spoke before US diplomats last December, almost as if he could hardly believe his own words. "It is really Halliburton [to whom] all the oil majors are turning," he is quoted as saying, "to extract, process, and deliver the oil." 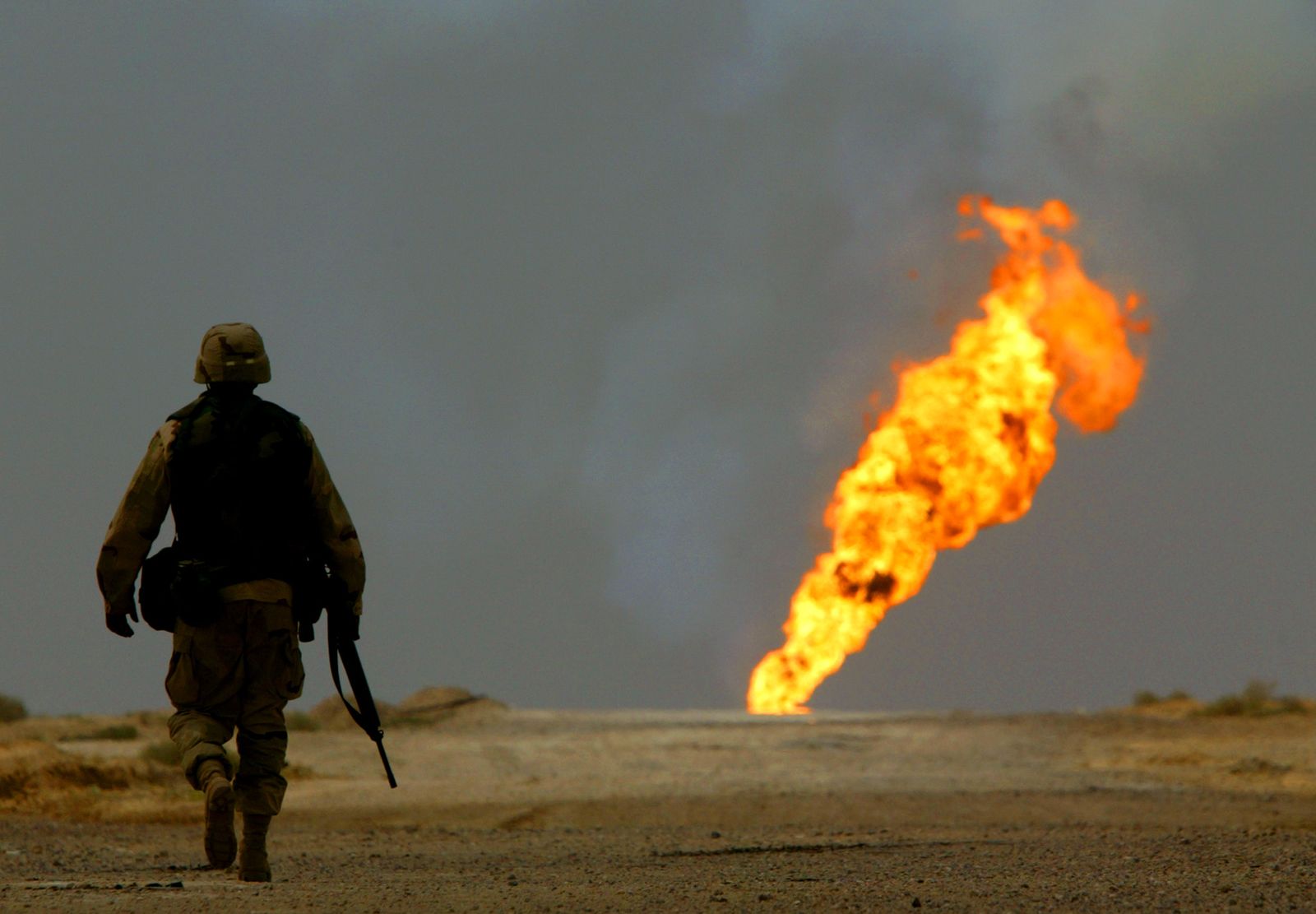 A US soldier walks towards a burning oil well in Iraq's vast Rumaila oil fields in this March 2003 photo: Even directly after the invasion, the US troops didn't pay close attention to the issue of oil.