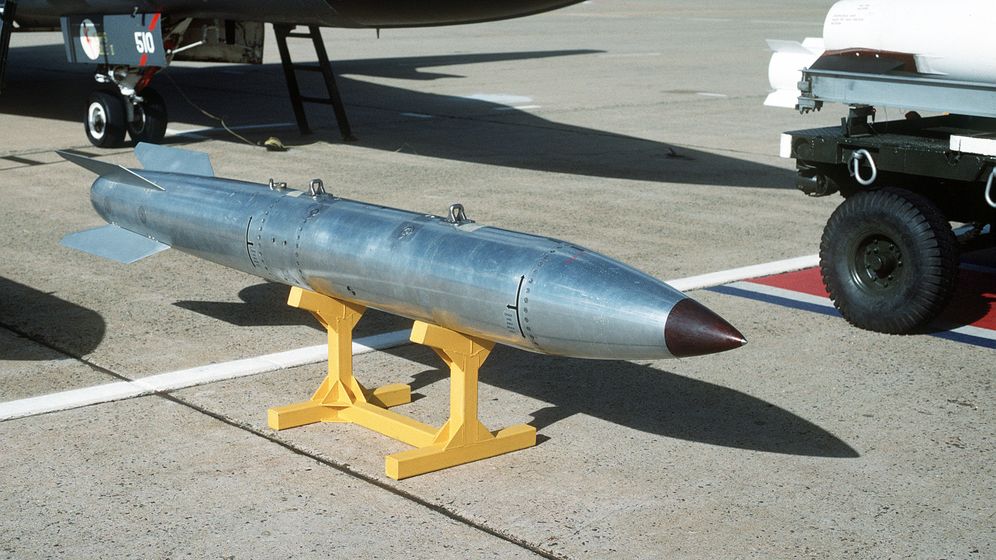 The idea of fighter jets taking off from Western Europe, thundering their way eastwards and dropping nuclear bombs on Soviet troops is a scenario taken straight out of the Cold War playbook. But while that playbook has long been outdated, American nuclear bombs are still stationed in Europe. In Germany alone, up to 20 B-61 weapons are stored on a German airbase in the village of Büchel in Rhineland-Palatinate.

The German government has said on numerous occasions it would like to see those weapons removed, but there is no great chance of that happening anytime soon. Instead, the weapons are expected to be upgraded with enhanced military capabilities.

Last week, representatives of the US military, the Pentagon and the Department of Energy announced new details about the B-61 program in a hearing in the House Armed Services Committee's Subcommittee on Strategic Forces. The new variant of the nuclear bomb, called the B61-12, is now expected to replace the older types 3, 4, 7 and 10 as well as the bunker-busting B-61-11 and B-83 strategic nuclear bombs. The latter has an explosive power of up to 1.2 megatons of TNT, making it more than 90 times more powerful than the bomb dropped on Hiroshima.

The first B-61-12 is expected to be completed by 2020. By 2024, all the old bombs are expected to be replaced. Then, according to the plan, the new weapons will be deployable using fighter jets like the F-16, the new F-35 and with strategic bombers like the B-2 "Spirit" or the planned new LRS-B bomber.

The German Tornado fighter bombers stationed at Büchel will also be equipped to be able to use the new B-61-12 weapons, but only as analog ballistic glide bombs ("System 1"). The "System 2" weapons will be modern, digital nuclear precision bombs designed for modern digital fighter-bombers like the F-35, the "Joint Strike Fighter". This will be made possible by adding a state of the art new guided bomb Tail Kit Assembly that is being developed simultaneously with the B-61-12 by Boeing. Some 800 of these new tail kits are to be purchased at an expected cost of $1.6 billion.

The US military has high expectations for "System 2". Because of its greater precision, the weapon will require significantly reduced explosive power compared to most of its predecessors. The smallest of the existing B-61s, the B-61-4, has a destructive power of 50 kilotons of TNT, or roughly four times the size of the Hiroshima bomb. Reused and reworked nuclear components will be used for the B-61-12, but the explosive power of the new bomb is expected to cover and securely destroy the same targets that previously weapons with 300, 400 or even more kilotons of TNT might have coped with.

Warnings of a Weapon with New Capabilities

Indeed, experts view the B-61-12 as far more than a pure life-extension program or slightly upgraded version of the old bombs. Instead, they consider it to be, de facto, a weapon with new military capabilities -- a development that would seem to violate the spirit of US President Barack Obama's stated pledge of not creating any new nuclear weapons or ones with new military capabilities.

So far, no bombs with the military capabilities of the B-61-7, B-61-11 or B-82 have been deployed in Europe, Hans Kristensen of the Federation of American Scientists wrote in a blog posting on Oct. 31. The B-61-12 is intended to consolidate the potential of all these weapons. "Not bad for a simple life-extension," Kristensen wrote. That would make the B-61-12 an "all-in-one nuclear bomb on steroids," he added.

Stephen Young of the Union of Concerned Scientists expressed similar thoughts. The responsible agency, the National Nuclear Security Administration (NNSA), itself admits that 15 of the 16 planned upgrades are not aimed at improving security and avoiding obsolescence, but rather an increase in performance. According to Young, that shows that performance has been the "driving factor" behind the modernization program.

But this is not even the crucial question, argues Oliver Meier from the German Institute for International and Security Affairs, because "the new capabilities will come about at any rate." That has already been stressed not only by external experts but also by the US Government Accountability Office (GAO). And "one must deal with" this reality, Meier said.

A Threat to Disarmament Negotiations

The NNSA is trying to placate its critics: The B-61-12 uses revised versions of nuclear components taken from an existing bomb and brings with it no new military capabilities, officials claim. All targets for which the B-61-12 was conceived have already been covered previously -- with weapons that carry a much greater explosive power. And with the help of the B-61-12, the US' total stockpile of airborne nuclear bombs could be reduced by around half its current amount.

But observers warn of a potential threat to the future disarmament negotiations between NATO and Russia, intended to discuss the issue of non-strategic nuclear weapons. That the B-61-12 is now set to replace the B-61-11 bunker buster and the strategic B-83 is "indeed alarming," Meier said. "The Russians are modernizing their arsenal also, and will surely, therefore, gratefully use the B-61 program to question NATO's seriousness." In the disarmament efforts, the B-61 modernization program is thus "definitely not helpful."

Götz Neuneck of the Institute for Peace Research and Security Policy in Hamburg sees the onus being put onto the incoming German government. "They should make it clear to Washington that Europe does not need the new bombs and will not make any delivery systems available for it." In addition, NATO must urgently make concrete offers to Russia with regards to the controversial US missile defense system, which is seen by Moscow as a threat. "If all this fails," said Neuneck, "new tactical nuclear weapons will be stationed in Europe, and nuclear disarmament will be impossible for decades."

'We Still Need to Complete' the Program

The NNSA, meanwhile, is pressing ahead with the B-61 modernization program, despite the criticism from pro-disarmament politicians and an enormous explosion in costs -- because the B-61 project is only the first step on the path to a more modern, much more efficient nuclear weapons posture for the US. In November 2012, the Nuclear Weapons Council, a joint decision-making body of the departments of defense and energy, enacted the so-called 3-plus-2 strategy, whereby American nuclear weapons are to be kept ready for use until well into the second half of this century.

In the future, Washington plans to have three types of nuclear warheads for sea- and land-based long-range missiles. Two further types will remain in service on aircraft: One bomb, the B-61-12, and one warhead yet to be chosen for future air-launched cruise missiles, which is set to be based on a derivative of the B-61.

From the viewpoint of the NNSA, the B-61 program cannot be dumped, because it would have a domino effect on subsequent projects complementing the 3-plus-2 strategy. Even the prospect of the planned new disarmament agreement with Russia, in which non-strategic nuclear weapons are set to be included for the first time, is not a valid reason from their perspective. "Make no mistake," said assistant secretary of defense for global strategic affairs Madelyn Creedon, "even if the NATO alliance struck an agreement with Russia to mutually reduce tactical nuclear weapons, we would still need to complete the B-61-12 LEP (life extension program) on the current timeline."

The other four warhead types are also set to be thoroughly modernized. Whether additional new weapons would be developed in doing so is still open. In a plan describing the NNSA's future programs that was recently put before Congress, it said: "NNSA will not develop new nuclear warheads or provide new military capability, except to improve safety, security and reliability."