When the most powerful man in the world holds a State of the Union address, as President Barack Obama did on Tuesday evening in Washington, political stakeholders listen closely. They comb through the text, looking for messages in the lines and between them.

This year, however, some of the most attentive listeners were not sitting in the joint Congressional session on Capitol Hill, or even in the US at all. Rather, they were sitting in capital cities across Europe. European Union leaders, Chancellor Angela Merkel and British Prime Minister David Cameron chief among them, were hoping for a clear commitment to the pursuit of a trans-Atlantic free-trade zone. It is an idea the Europeans threw their support behind at the last EU summit in Brussels.

And Obama didn't disappoint. "Tonight, I'm announcing that we will launch talks on a comprehensive trans-Atlantic trade and investment partnership with the European Union," he said. "Because trade that is fair and free across the Atlantic supports millions of good-paying American jobs."

Finally, the project that has long been cause for euphoria among trans-Atlanticists has received an official seal of approval from the highest level. America and Europe, in different weight classes when it comes to foreign and military policy, are to fight the economic battle in a class of their very own: Super heavyweight.

Trade between the two regions already accounts for more than 50 percent of the global gross domestic product and secures an estimated 15 million jobs. US investments in France and Belgium alone in 2010 were as high as in India and China combined, says Dan Hamilton from the Center for Transatlantic Relations at Johns Hopkins University.

Should this trade become easier due to the elimination of tariffs and, in particular, cumbersome regulations, it could generate economic growth of up to 1.5 percent on both sides of the Atlantic, according to estimates by the US Chamber of Commerce. Vice President Joe Biden says that if such a deal goes through, "the fruits of success would be almost limitless." Those involved in trans-Atlantic issues refer to the agreement as "an economic NATO."

Still, Obama's support does not mean the agreement is a done deal. The devil is in the details. Whether it has to do with the length of car bumpers, the permissibility of genetically modified corn or the correct method to be used when slaughtering beef, trade talks are often just as complicated as nuclear non-proliferation negotiations. By their very nature, they touch on issues that are often vital to the cultural identities of certain countries or regions. Already, small armies of officials have failed to find adequate answers to such questions. Most recently, the Trans-Atlantic Economic Council created by Merkel in 2007 became bogged down in the bureaucratic brambles.

Some interest groups have refused to budge. The powerful US agrarian lobby, for example, insists on unlimited access to European markets, including such products as genetically modified produce, which is controversial on the Continent. European companies, for their part, refuse to accept the diktats of US regulatory authorities regarding whether and how they can pursue state contracts.

"The question is whether independent US authorities will accept European standards, and vice versa," says Daniel Gros from the Center for European Policy Studies in Brussels. In previous efforts to reach agreement, officials from the two sides couldn't even agree on a joint model for crash-test dummies.

Furthermore, US Congress must ultimately approve a free-trade agreement, whatever the final result might be. Many conservative lawmakers, however, have little faith in European unity, noting for example that French President François Hollande does not share the enthusiasm for expanded free trade exhibited by Merkel and Cameron. The applause for Obama's free-trade comments during his State of the Union address was notably unenthusiastic.

Still, the timing of his push is propitious. Hope for a worldwide free-trade agreement, first proposed in the Doha Round a decade ago, has essentially evaporated. At the same time, both Europeans and Americans know that their economies badly need stimulus, yet neither side has money for a far-reaching program. Growth through the reduction of trade barriers is an attractive prospect.

Furthermore, promoting a trans-Atlantic agreement would allow Obama -- on the eve of his planned visit to Berlin in June -- to address European concerns that the US has turned away from the Continent in favor of Asia. "A trans-Atlantic agreement would be a signal that America and Europe want to mutually strengthen their economic capabilities and thus gain renewed political momentum," says Constanze Stelzenmüller from the German Marshall Fund in Berlin. But in his Tuesday evening speech, Obama still lauded the benefits of a trans-Pacific trade agreement with Australia and Asian countries before he mentioned the trans-Atlantic deal.

From the European perspective, an "economic NATO" would be a sign of European unity and would open up the possibility for cooperation from countries with similar market philosophies from other regions, says Kristen Silverberg, the former US ambassador to the European Union.

Skeptics, on the other hand, see the possibility of a trans-Atlantic agreement as little more than a defense against the new economic superpower of China and an attempt to cement "Western values." 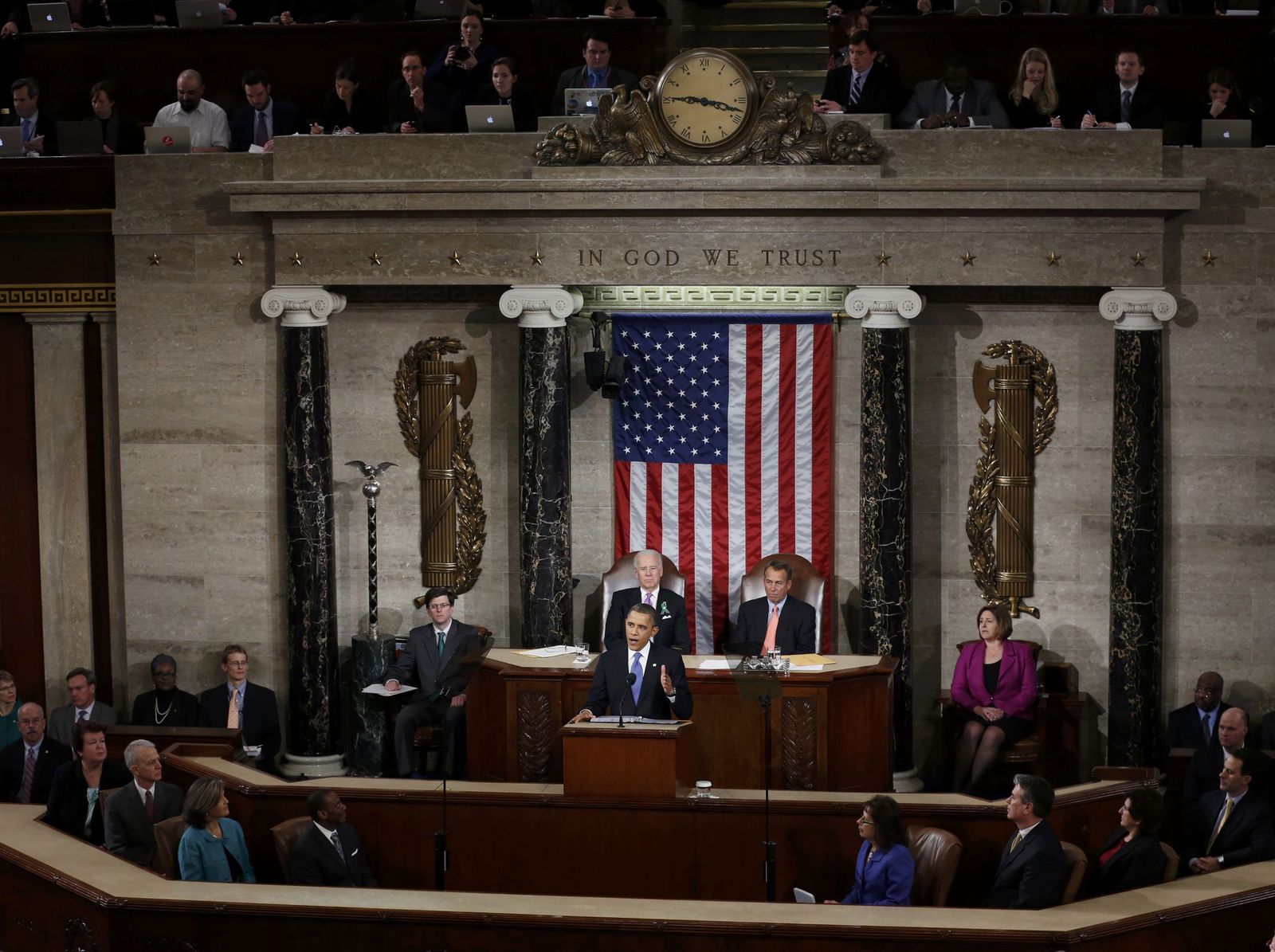 US President Barack Obama backed a trans-Atlantic free trade agreement during his State of the Union address on Tuesday.