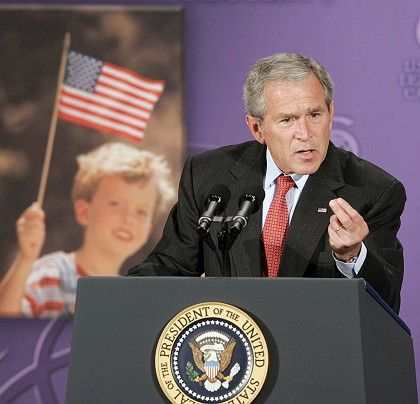 For months, German Chancellor Angela Merkel has been trying to hammer out an agreement to combat climate change that all members of the G-8 could agree with. For just as long, the US has been resisting any agreement that involves a commitment to concrete emissions-reduction goals.

On Thursday, US President George W. Bush took the offensive, and unveiled his own proposal for combating global warming. He would like to see the world's 15 worst emitters of greenhouse gases -- including the US, China, India, Brazil, Australia, South Africa, Mexico, South Korea and Russia in addition to a number of European countries -- hold a series of meetings beginning this autumn aimed at setting a long-term global goal for reducing emissions.

In the speech, in which Bush also discussed the US strategy for aid to Africa, the President did not specify by how much he sought to reduce US or global greenhouse gas emissions. He stressed that each nation involved would establish its own midterm targets based on its energy mix and future energy needs.

"It's important to ensure that we get results, and so we will create a strong and transparent system for measuring each country's performance," Bush said. "This new framework would help our nations fulfill our responsibilities under the UN Framework Convention on Climate Change. The United States will work with all nations that are part of this convention to adapt to the impacts of climate change, gain access to clean and more energy-efficient technologies, and promote sustainable forestry and agriculture."

The emissions reduction goals would be set by the end of 2008, according to the White House proposal.

Bush's plans are likely to be seen as a setback for Merkel, who wanted to reach an agreement on climate change at the G-8 summit. The timing of the speech, coming just days before the start of the June 6-8 summit in Heiligendamm, Germany, is seen as significant. Tension between the US and German governments has been mounting in the run-up to the summit, where global warming will be one of the main topics on the agenda.

Merkel wants a commitment from the world's richest nations to limit global warming to 2 degrees Celsius (3.6 degrees Fahrenheit) this century and to cut global greenhouse gas emissions by 50 percent below 1990 levels by 2050.

However Perino made clear the United States would continue to reject Kyoto-style caps on carbon emissions. The White House also emphasized that the US does not support a worldwide emissions-trading scheme, another of Merkel's key goals for Heiligendamm.

In his speech, Bush also called for cutting tariff barriers to sharing environmental technology within six months, freeing up the distribution of new environmentally friendly technology.

Reaction to Bush's plans from environmental activists was swift and critical. "The rhetoric clearly shows that if you are doing this just before the G-8 meeting you really are trying to scupper the G-8," said Kit Vaughan, climate change adviser at the non-governmental organization WWF. "Generally we would be quite skeptical about whether this is looking for a solution to climate change or whether it is trying to regain ground and maintain its own political and economic interests."

The new announcement is unlikely to reduce tensions between the US and Germany ahead of the summit. Earlier this week, German environment minister Sigmar Gabriel of the center-left Social Democrats (SPD) criticized the US for its stance on tackling climate change. "The challenge remains that of convincing the Americans that they have a responsibility -- also for their own citizens who suffer from climate change," he said Wednesday. "Look at the hurricane in New Orleans."