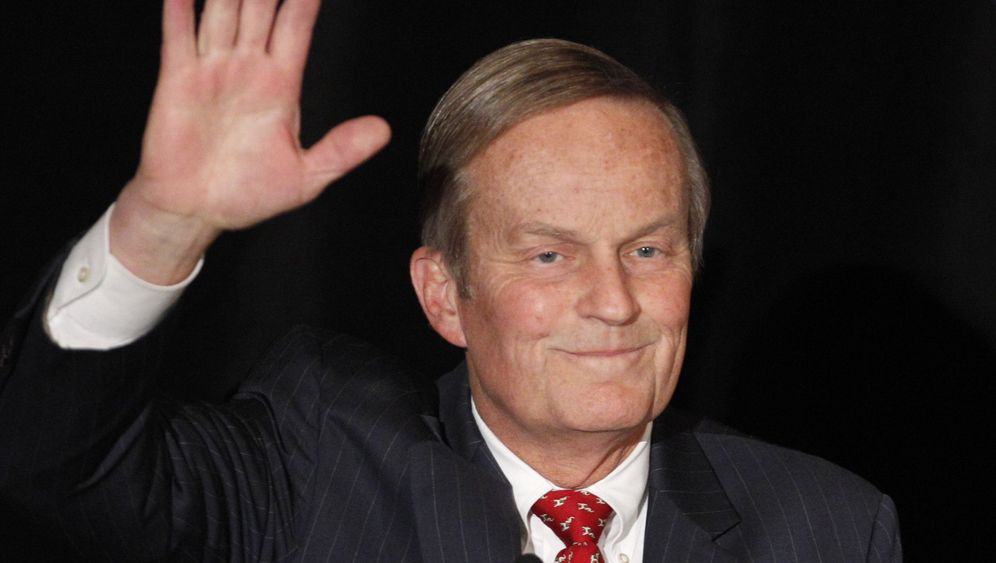 Timing is everything. Maybe Todd Akin chose his words with care. More likely, he didn't.

The über-conservative congressman from Missouri was a favorite to snatch a coveted Senate seat in November and thus perhaps help his Republican Party reclaim the majority in both chambers of Congress.

Then came Sunday. In a local TV interview, Akin held forth about a favorite issue of his. Abortion, he said, should be illegal even in rape cases because, he claimed, a "legitimate rape" rarely leads to pregnancy: "The female body has ways to try to shut that whole thing down."

In other words, if women are victims of "legitimate" rape, the stress should work as a contraceptive. This from a man who sits on the House Committee on Science, Space and Technology.

For Akin, such outrageous blather is nothing new. He often delights in Bible-thumping rants against liberals, global warming and President Barack Obama. His constituents love it: A House member since 2001, the 65-year-old theologian has been reelected five times, most recently in 2010 with a whopping 67.9 percent.

His party never flinched, either. But Akin's current crudeness comes a week before the Republican National Convention in Tampa, where the GOP is trying to rebrand itself as cool, charming and inclusive, complete with a glossy makeover for its presumptive nominee, Mitt Romney.

It's not enough that the four-day frolic is being threatened by soon-to-be Hurricane Isaac, currently churning through the Caribbean but possibly heading for Tampa Bay. Now it's also doomed by Hurricane Akin.

Cue the outrage. Fearing voter wrath and a Senate loss, party elders are tripping over each other to distance themselves. Even pro-choice-turned-pro-life Romney, who'd much rather talk about the economy than reproductive rights, urged Akin "to exit the Senate race."

Akin, having apologized, has vowed to tough it out: "The mistake I made was in the words I said, not in the heart I hold," he said in a new ad. He elaborated in a radio interview that, instead of "legitimate rape" he had meant to say "forcible rape."

The second term, however, is hardly any less problematic than the first. And herein lies the Republicans' blatant hypocrisy: "Forcible rape" is not Akin's expression -- it is theirs. It is a redefinition of a brutal crime and is popular among pro-lifers, among them Romney's suave running mate Paul Ryan.

The term is based on the impertinent insinuation that women will lie about being raped just to get an abortion. It also seems to imply that statutory rape, or even date rape, isn't really rape.

This misogynistic language showed up in the first draft of a strict anti-abortion law in 2011, co-sponsored by Akin and Ryan. By the time it was passed by the House with the votes of 235 Republicans and 16 Democrats, the offensive term "forcible rape" had been removed. (The law has since languished in the Senate.)

Indeed Akin, uninvited from the Florida festivities, is no outlier. He is Ryan's ally -- and his thinking has deep roots in the Republicans' ideological soul.

The party's new platform, coincidentally ensconced this week, is a case in point. Set to be adopted in Tampa, the platform is the party's most conservative yet, embracing the starchy credos of the 1950s. "The document," said Virginia Governor Bob McDonnell, the platform committee chairman, "will reflect the heart and soul of the Republican Party."

It is also nothing less than a stealth attack on modernity, revealing the true colors of the Republican base. It reveals a party which has marched far to the right, thanks to the Tea Party movement and populist chagrin over the party's more moderate establishment.

Tough luck if you're gay, poor, an immigrant, a minority or an independently-minded woman: These retro-Republicans don't like you, don't trust you and don't want you making your own decisions. They resent government meddling in their own lives but love meddling in yours, as chaperones, judges and moralizers.

According to CNN and the New York Times, which obtained excerpts of the platform, they would outlaw abortion without exceptions for cases of incest or rape, or when the mother's life is at risk. A "Human Life Amendment" to the constitution would make sure that the states don't create loopholes.

They would also make sure that same-sex marriage never becomes reality, calling it an "assault on the foundations of our society." Again, a constitutional amendment would annul all contrary state laws and court rulings.

More Conservative than Ever

They would toughen immigration laws, finish the controversial, unaffordable border fence along the US-Mexican border and abolish in-state tuition for undocumented students.

They praise new voter ID laws passed by eight US states so far, forcing voters to present identification at the polls in spite (or because?) of indications that this could suppress turnout among the poor, minorities and immigrants -- traditionally Democratic voting blocks.

They would further relax gun control laws despite a recent spate of fatal mass shootings.

McDonnell's platform committee approved the final text on Tuesday evening. It was supposed to happen quietly, so as not to derail the cheerful rollout of Romney's Sunshine State coronation.

It's true that GOP platforms have long been more conservative than the actual candidates. And they tend not to be widely discussed, intended instead as a fop to the party base while the standard bearer loudly woos the undecided voters in the middle.

Todd Akin, though, has ruined that strategy. Instead, he has unmasked the creepy charade for all to see.

Romney had no choice but to denounce Akin. But he has also been forced into the uncomfortable position of having to distance himself from his own party's platform, reading as it does like an Akin manifesto.

Meanwhile, the preparations for the lavish Tampa bash are in full swing. Official motto of Monday's opening night: "We Can Do Better." Indeed.