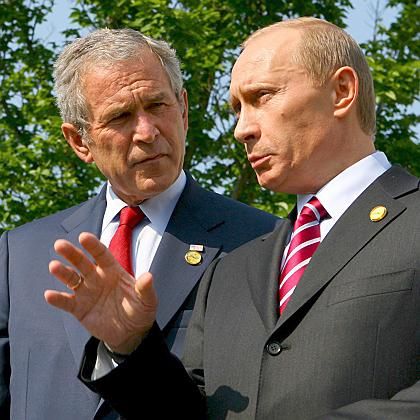 Bush used to think Putin "was one of the good guys."

Senator John McCain spoke in a low voice, as he often does at campaign appearances. The Republican presidential hopeful had just discussed Iran, and now it was time to say a word or two about Russia. "When I looked into Vladimir Putin's eyes," he told the audience in a conspiratorial whisper, "I saw three things: a K and a G and a B."

On Wednesday, at a White House press conference with George W. Bush, a reporter asked the president what he thought of McCain's words. "Pretty good line," said Bush with a chuckle -- and threw some more rhetorical coal on the fire. He said Putin was "wily" over the question of who might succeed him at the Kremlin. "He wouldn't tip his hand."

Bush had just used unusually hawkish words at this press conference to describe the nuclear tension with Iran. Clearly referring to Putin, Bush had told reporters, "If you're interested in avoiding World War III, it seems like you ought to be interested in preventing Iran from having the knowledge necessary to make a nuclear weapon."

That reference to "World War III" was reminiscent of earlier presidential rhetoric like "The Axis of Evil" (Bush, 2002) and "The Evil Empire" (Reagan, 1983). The choice of words reflected a deep chill in US-Russian relations -- and differences over Iran are not the only reason for the falling out.

"The relationship is really shaken. Both sides appear determined to verbally assault each other as often as possible over the coming months," says Rose Gottemoeller, Director of the Moscow office of the Carnegie Endowment for International Peace in an interview with SPIEGEL ONLINE.

The conflict has been brewing for months now. Sometimes Putin just denounces American abuses of power -- as he did in Munich last February -- and sometimes he compares the US under Bush to Nazi Germany under Hitler. Last week, he kept US Defense Secretary Robert Gates and US Secretary of State Condoleezza Rice waiting for a full 45 minutes in Moscow, then cracked jokes about the possibility of a joint missile defense system on the moon.

For their part, the Americans never miss an opportunity to brand Putin's Russia as undemocratic. In May 2006, US Vice President Dick Cheney took Putin severely to task when he accused the Russian government of using gas and oil as a means of blackmailing its neighbors. Now Bush has gone a step further. Since Putin won't fully cooperate with the US on Iran, the president has warned of the danger of a third world war.

But the conflict over Iran is only one bone of contention in this complex relationship. It seems unlikely, for example, that Putin visited Iranian President Mahmoud Ahmadinejad this week just to provoke the Americans.

"The Russians have been basically pursuing their own agenda here," says Gottemoeller. "The visit fits with their efforts to enhance their role as a world power." But she believes Putin made a strategic error in his remarks on Iran's right to develop a civil nuclear program. "He wanted to be warmly welcomed in Tehran and that's why he made those statements. Now he has to deal with a long-term dilemma because the Iranians will expect support from him on this issue."

But Iran is Still a Threat

In fact, Moscow still seems to want Iran to cooperate with the Europeans and the Americans. Before his trip to Tehran, it should not be forgotten, he did meet both German Chancellor Angela Merkel and Condoleezza Rice to discuss a suitable approach.

Gottemoeller is organizing a major conference on Iran in Moscow, and after speaking with journalists and government officials she believes Russia still sees a nuclear-armed Iran as a threat.

Bush also acts as if he can still work with Russia on Iran. At his bellicose press conference, he did not flatly condemn Putin's visit to Tehran -- but said he preferred to wait until he had heard his report. Bush openly voiced his hope that Washington and Moscow could continue to cooperate.

Many experts also see a similar exaggerated level of concern with regard to a declaration recently made by five states in the Caspian region. One principle of this declaration is that signatories will not allow other countries to use their soil for acts of aggression against any other Caspian state -- including Iran. The agreement has been read as an escalation between the US and Russia, in part because the US has maintained close relations with Azerbaijan and may want to use air bases there.

"I don't find this declaration all that surprising," said Richard Morningstar, a former special envoy for the region under President Bill Clinton and now a lecturer at Harvard. "Would the US use Azeri bases if it wanted to launch missions against Iran? Probably not," he told SPIEGEL ONLINE. "Has Russia been trying to expand its influence in the region? Yes. Do these countries meet on a regular basis? Yes. Do the Americans understand this? Of course. These are Russia's neighbors, after all."

But personal relationships, including those between leaders of state, are very important to Bush, and he feels Putin has deceived him. "He totally misjudged Putin," says Michael McFaul from the Hoover Institute at Stanford University. "He thought he was one of the good guys." Like former German Chancellor Gerhard Schröder's description of Putin as an "exemplary democrat," Bush's act of flattery after his first meeting with Putin in 2001 -- when he said he had looked Russian leader in the eye and glimpsed his soul -- appears to have been wishful thinking. 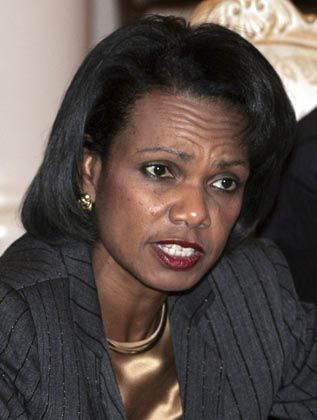 US Secretary of State Condoleezza Rice in Moscow.

The Americans also feel streamrollered by the new debate over Putin's ongoing political career. "The White House expected Putin to play some sort of role after his departure, perhaps as the head of Gazprom," says Gottemoeller. "But they didn't think it would be a key political role." Current rumors that Putin will run for prime minister have dashed the hopes of top Washington officials for a new start in US-Russia relations.

In the interest of maintaining a strategic dialogue with Moscow, Americans have also tended to move cautiously in criticizing Russian human-rights violations in Chechnya. But if they're also forced to accept Putin's less-than-democratic plans to stay in power, they could lose credibility as champions of democracy -- an image which has already been tarnished in the wider world by the Iraq fiasco and torture scandals.

"It's hard to reprogram the basic Russian DNA"

During her recent visit to Moscow, Condoleezza Rice insisted that the White House had by no means lost moral authority in its relations with Russia. But many intellectuals disagree, including Masha Lipman, the former head of a well known Russian news magazine and a columnist for theWashington Post: "It is not clear whether he truly believes that Western democracy is nothing but disguise and manipulation, but Putin never misses an opportunity to say it is, and the Russian people increasingly share this view."

Moderate elements on both sides have tried to defuse the hawkish rhetoric, including Richard Lugar, an influential Republican senator. During an appearance at the Brookings Institute just before Rice's Moscow visit, he made noises reminiscent of a marriage counsellor: "We both have to realize that we urgently need each other," he told the audience, "and we have to put as much energy into finding common approaches as has recently gone into venting our frustrations."

But the challenges are daunting. "The Kremlin's pursuit of a new arch-enemy has altered Russian-American relations," says McFaul. "Potential areas of cooperation, such as common investments in oil production, in military bases to fight the Taliban and in missile defense systems have been transformed into a cutthroat competition where there are only winners and losers."

Putin has already made clear that if the the US fails to respect Russian security interests, Russia will withdraw from agreements made at the end of the Cold War, including major disarmament treaties. And his assertive stance during his trip to Iran reminded the Americans first and foremost of the basic tenets of the "Putin doctrine," which can be summed up as follows: Accept us as equals, treat us as peers.

Bush once imagined that he had looked into Putin's soul, but now he appears to have accepted the Russians as they are, despite all the heavy rhetoric about world wars. At the White House press conference this week he sounded resigned. "Reprogramming the kind of basic Russian DNA," he said, "which is a centralized authority -- that's hard to do."