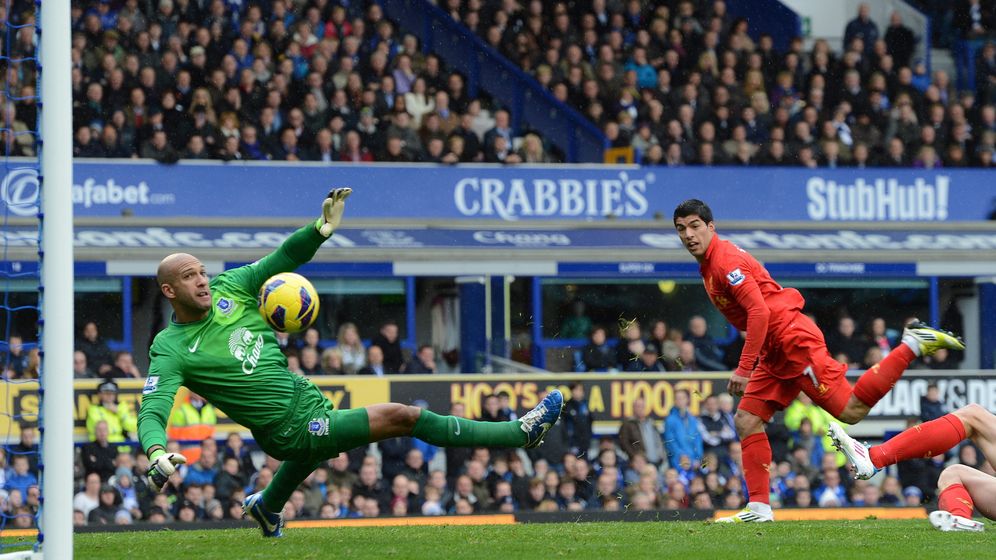 Photo Gallery: 'Tourette's Is a Condition, Not an Illness'

Howard: While training and during a match, I may develop a pronounced twitch in one of my arms, or my neck or one of my eyes. It is usually very sudden. Sometimes I start coughing, or individual muscles contract.

SPIEGEL: In medicine, behavioral or emotional disorders of this kind are referred to as tics. How often do you have tics during a game?

Howard: I've never counted them. It happens all the time, without any warning, and it increases the nearer an important game draws. It always occurs more when I am particularly nervous.

SPIEGEL: How does your body respond when you are nervous?

Howard: It becomes more tense than usual, my muscles contract more often, and I make hasty movements more often. But that's a good thing because when that happens I know: Now it matters, now I have to pull myself together.

SPIEGEL: As a goalkeeper you can scarcely afford to make any mistakes. What do you do if your arm twitches uncontrollably during a game?

Howard: As long as the game is not happening right in front of my nose but somewhere in the midfield, I let it twitch. I don't try to suppress it, either.

SPIEGEL: And if the ball comes near you?

Howard: Then I am all there. It's strange. As soon as things get serious in front of the goal, I don't have any twitches; my muscles obey me then.

SPIEGEL: How do you do that?

Howard: I have no idea. Not even the doctors can explain it to me. It's probably because at that moment my concentration on the game is stronger than the Tourette syndrome.

SPIEGEL: Has a ball ever slipped out of your hands because of a tic?

Howard: I have dropped a number of balls during my career. But it has never been because of a tic.

SPIEGEL: Do you worry that this could happen one day?

SPIEGEL: The best known and, for laypeople, most puzzling aspect of Tourette syndrome is how it causes those affected by it to curse uncontrollably. Does that happen to you, too?

Howard: Fortunately not. My only vocal tic is that I occasionally have a strong cough. I've never had a curse word simply slip out.

SPIEGEL: You grew up with your mother. When did she notice that you had a neuropsychiatric disorder?

Howard: I was about 10 years old at the time and brought home pockets full of stones. I often arranged my toys in a particular order, too, or counted the lines on a sheet of paper.

SPIEGEL: How did your mother react to this compulsive behavior?

Howard: She read up on it first, and then she took me to see a psychiatrist. She wanted to know what could be done against Tourette syndrome.

SPIEGEL: What did the doctor recommend?

Howard: He wanted to prescribe me a drug. But drugs were out of the question for us because there was a danger that they would dull my mind.

SPIEGEL: Were there any alternatives?

Howard: For a while we tried coffee, which is supposed to have a soothing effect even though the coffee stimulates you even more. The effect was nil, and as a child I found the taste revolting. What helped me most was meditating.

SPIEGEL: What does it look like when a sixth-grader meditates?

Howard: It wasn't meditation in the classical sense, more a matter of closing my eyes and collecting myself. My mother often sent me outdoors to play because she knew that did me good. I couldn't sit still for long anyway.

SPIEGEL: How did you manage at school?

Howard: That was a real challenge. Unlike today, I found it incredibly hard to concentrate and listen for a long time. I kept fidgeting. But most of my teachers knew how do deal with it. I was the only student who was allowed to get up and walk around during classes when I got restless.

SPIEGEL: Was your disorder more of a burden to you then than it is today?

Howard: It was more chaotic, especially between the ages of nine and 15. Whenever I had just found out how a tic worked and how to deal with it, six months later the next one would come along.

SPIEGEL: A common accompanying feature of Tourette's is that the person affected has unusually swift reactions. Was that one of the reasons why you started playing basketball and football in high school?

Howard: No. It was not until I was 18 or 19 that I realized I was faster than others when it came to certain movements, and that these reflexes were linked to my disorder. By then I was already playing for the US national under-17 soccer team.

SPIEGEL: After you had signed with Manchester United in 2003, the British tabloid media described you as "disabled" and called you the "cursing goalkeeper." How did you deal with that?

Howard: It didn't bother me. These headlines were written by people who had no idea about Tourette syndrome. They didn't know that I am neither disabled, nor do I curse. But uneducated people are in the habit of making unqualified assertions. I have to live with that.

SPIEGEL: Did your fellow teammates or the coach, Alex Ferguson, jump to your defense?

Howard: I don't need any moral support or any pity today, and I didn't need it then either. On the contrary. I told them they shouldn't give any thought to the press. My teammates got much more worked up about it than I did.

SPIEGEL: You could have taken legal steps to defend yourself.

Howard: My defense was not to say anything, and not to provide the media with a target. I ignored them, and that was the end of it.

SPIEGEL: How did Coach Alex Ferguson deal with your disorder?

Howard: He never asked about it or mentioned it. He knew I had grown up with it. The same is true of David Moyes, my current coach at Everton FC. He has never cared about the strange movements I make from time to time. What mattered to them was that I held the ball.

SPIEGEL: During your three years at Manchester United you often lost your regular position to the second-string goalie, Roy Caroll. Did he ever have anything unkind to say to you in the course of your rivalry?

Howard: No, my Tourette's was never an issue for him or any other of my teammates. Besides, everyone knew that I was unmoved by ridicule.

SPIEGEL: You have been the principal goalie for Everton FC since 2007. Do your teammates sometimes pull your leg because of your tics?

Howard: Of course they make fun of them. But that's okay, because I'm friends with people like Jan Mucha or Leighton Baines. The good thing is that the guys also have their little quirks, which I can poke fun at.

SPIEGEL: Before coming to England, you played in the US. Was that any different for you?

Howard: The issue is more widely accepted in society in the US than it is in England. But since joining Everton that is changing here, too. Now professors approach me on the training grounds wanting to talk to me and to continue studying the disease.

SPIEGEL: Does Tourette syndrome affect you in your everyday life?

Howard: No. I cook, eat and sleep like any other person, only that I have tics in between. But those are part of life for me, like breathing in and out.

Howard: Both make me feel proud. But the bigger achievement is certainly the fact that I did not allow myself to be restricted by Tourette syndrome and continued along my path in soccer.

SPIEGEL: Only 2 percent of people throughout the world live with this disorder. The percentage playing professional sports is even smaller. Do you sometimes feel that you are being reduced to your Tourette syndrome, despite your success as an athlete?

Howard: No, not at all. I see myself as a positive example that Tourette syndrome does not have to be an illness. It's just a condition, which still allows anyone to fulfill their dreams.