US Vice President Dick Cheney -- the power behind the throne, the eminence grise, the man with the (very) occasional grandfatherly smile -- is notorious for his propensity for secretiveness and behind-the-scenes manipulation. He's capable of anything, say friends as well as enemies. Given this reputation, it's no big surprise that Cheney has already asked for a backroom analysis of how a war with Iran might begin.

In the scenario concocted by Cheney's strategists, Washington's first step would be to convince Israel to fire missiles at Iran's uranium enrichment plant in Natanz. Tehran would retaliate with its own strike, providing the US with an excuse to attack military targets and nuclear facilities in Iran.

This information was leaked by an official close to the vice president. Cheney himself hasn't denied engaging in such war games. For years, in fact, he's been open about his opinion that an attack on Iran, a member of US President George W. Bush's "Axis of Evil," is inevitable.

Given these not-too-secret designs, Democrats and Republicans alike have wondered what to make of the still mysterious Israeli bombing run in Syria on Sept. 6. Was it part of an existing war plan? A test run, perhaps? For days after the attack, one question dominated conversation at Washington receptions: How great is the risk of war, really?

In the September strike, Israeli bombers were likely targeting a nuclear reactor under construction, parts of which are alleged to have come from North Korea. It is possible that key secretaries in the Bush cabinet even tried to stop Israel. To this day, the administration has neither confirmed nor commented on the attack.

Nevertheless, in Washington, Israel's strike against Syria has revived the specter of war with Iran. For the neoconservatives it could represent a glimmer of hope that the grandiose dream of a democratic Middle East has not yet been buried in the ashes of Iraq. But for realists in the corridors of the State Department and the Pentagon, military action against Iran is a nightmare they have sought to avert by asking a simple question: "What then?"

The Israeli strike, or something like it, could easily mark the beginning of the "World War III," which President Bush warned against last week. With his usual apocalyptic rhetoric, he said Iranian President Mahmoud Ahmadinejad could lead the region to a new world war if his nation builds a nuclear bomb.

Conditions do look ripe for disaster. Iran continues to acquire and develop the fundamental prerequisites for a nuclear weapon. The mullah regime receives support -- at least moral support, if not technology -- from a newly strengthened Russia, which these days reaches for every chance to provoke the United States. President Vladimir Putin's own (self-described) "grandiose plan" to restore Russia's armed forces includes a nuclear buildup. The war in Iraq continues to drag on without an end in sight or even an opportunity for US troops to withdraw in a way that doesn't smack of retreat. In Afghanistan, NATO troops are struggling to prevent a return of the Taliban and al-Qaida terrorists. The Palestinian conflict could still reignite on any front.

In Washington, Bush has 15 months left in office. He may have few successes to show for himself, but he's already thinking of his legacy. Bush says he wants diplomacy to settle the nuclear dispute with Tehran, and hopes international pressure will finally convince Ahmadinejad to come to his senses. Nevertheless, the way pressure has been building in Washington, preparations for war could be underway.

In late September, the US Senate voted to declare the 125,000-man Iranian Revolutionary Guard a terrorist organization. High-ranking US generals have accused Iran of waging a "proxy war" against the United States through its support of Shiite militias in Iraq. And strategists at the Pentagon, apparently at Cheney's request, have developed detailed plans for an attack against Tehran.

Instead of the previous scenario of a large-scale bombardment of the country's many nuclear facilities, the current emphasis is, once again, on so-called surgical strikes, primarily against the quarters of the Revolutionary Guards. This sort of attack would be less massive than a major strike against Iran's nuclear facilities.

Conservative think tanks and pundits who sense this could be their last chance to implement their agenda in the Middle East have supported and disseminated such plans in the press. Despite America's many failures in Iraq, these hawks have urged the weakened president to act now, accusing him of having lost sight of his principal agenda and no longer daring to apply his own doctrine of pre-emptive strikes.

The notion of war with Iran has spilled over into other circles, too. Last Monday Nancy Pelosi, the Democratic Speaker of the US House of Representatives, made it clear that the president would first need Congressional approval to launch an attack. Meanwhile, Republican candidates for the White House have debated whether they would even allow such details to get in their way. Former Massachusetts Governor Mitt Romney said he would consult his attorneys to determine whether the US Constitution does, in fact, require a president to ask for Congressional approval before going to war. Vietnam veteran John McCain said war with Iran was "maybe closer to reality than we are discussing tonight."

'A complete change and potentially dangerous'

Democratic frontrunner Hillary Clinton has also adopted a hawkish stance, voting in favor of the Senate measure to classify the Revolutionary Guard as a terrorist organization. Her rivals criticized Clinton for giving the administration a blank check to go to war. 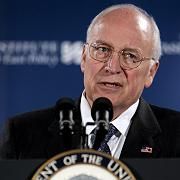 Vice President Dick Cheney. "One shouldn't underestimate how much power he still wields."

The US military is building a base in Iraq less than 10 kilometers (about six miles) from Iran's border. The facility, known as Combat Outpost Shocker, is meant for American soldiers preventing Iranian weapons from being smuggled into Iraq. But it's also rumored that Bush authorized US intelligence agencies in April to run sabotage missions against the mullah regime on Iranian soil.

Gary Sick is an expert on Iran who served as a military adviser under three presidents. He believes that such preparations mark a significant shift in the government's strategy. "Since August," says Sick, "the emphasis is no longer on the Iranian nuclear threat," but on Iran's support for terrorism in Iraq. "This is a complete change and is potentially dangerous."

It would be relatively easy for Bush to prove that Tehran, by supporting insurgents in Iraq, is responsible for the deaths of American soldiers. It might be harder to prove that Iran's nuclear plans pose an immediate threat to the world. Besides, the nuclear argument is reminiscent of an embarrassing precedent, when the Bush administration used the claim that Saddam Hussein possessed weapons of mass destruction -- which he didn't -- as a reason to invade Iraq. Even if the evidence against Tehran proves to be more damning, the American public will find it difficult to swallow this argument again.

The forces urging a diplomatic resolution also look stronger than they were before Iraq. Secretary of State Condoleezza Rice wants the next step to be a third round of even tighter sanctions against Iran in the UN Security Council. Rice has powerful allies at the Pentagon: Defense Secretary Robert Gates and Admiral William Fallon, head of US Central Command, which is responsible for American forces throughout the region.

Rice and her cohorts all favor diplomacy, partly because they know the military is under strain. After four years in Iraq and Afghanistan, the US lacks manpower for another major war, especially one against a relatively well-prepared adversary. "For many senior people at the Pentagon, the CIA and the State Department, a war would be sheer lunacy," says security expert Sick.

Bruce Riedel, a former CIA officer and now a Middle East expert at the Brookings Institution, agrees. A war against Tehran would be "a disaster for the entire world," says Riedel, who worries about a "battlefield extending from the Mediterranean to the Indian subcontinent." Nevertheless, he believes there is a "realistic risk of a military conflict," because both sides look willing to carry things to the brink.

On the one hand, says Riedel, Iran is playing with fire, challenging the West by sending weapons to Shiite insurgents in Iraq. On the other hand, hotheads in Washington are by no means powerless. Although many neoconservative hawks have left the Bush administration, Cheney remains their reliable partner. "The vice president is the closest adviser to the president, and a dominant figure," says Riedel. "One shouldn't underestimate how much power he still wields."

Russian President Vladimir Putin's visit to Tehran last week also played into the hands of hardliners in Washington, who read it as proof that Putin isn't serious about joining the West's effort to convince Tehran to abandon its drive for a nuclear weapon. Moreover, the countries bordering the Caspian Sea, including Central Asian nations Washington has courted energetically in recent years, have said they would not allow a war against Tehran to be launched from their territory.

Cheney derives much of his support from hawks outside the administration who fear their days are as numbered as the President's. "The neocons see Iran as their last chance to prove something," says analyst Riedel. This aim is reflected in their tone. Conservative columnist Norman Podhoretz, for example -- a father figure to all neocons -- wrote in the Wall Street Journal that he "hopes and prays" that Bush will finally bomb Iran. Podhoretz sees the United States engaged in a global war against "Islamofascism," a conflict he defines as World War IV, and he likens Iran to Nazi Germany. "Is it 1938 again?" he asks in a speech he repeats regularly at conferences.

Podhoretz is by no means an eccentric outsider. He now serves as a senior foreign-policy adviser to Republican presidential candidate Rudolph Giuliani. President Bush has also met with Podhoretz at the White House to hear his opinions.

Nevertheless, most experts in Washington warn against attacking Tehran. They assume the Iranians would retaliate. "It would be foolish to believe surgical strikes will be enough," says Riedel, who believes that precision attacks would quickly escalate to war.

Former presidential adviser Sick thinks Iran would strike back with terrorist attacks. "The generals of the Revolutionary Guard have had several years to think about asymmetrical warfare," says Sick. "They probably have a few rather interesting ideas."

According to Sick, detonating well-placed bombs at oil terminals in the Persian Gulf would be enough to wreak havoc. "Insurance costs would skyrocket, causing oil prices to triple and triggering a global recession," Sick warns. "The economic consequences would be enormous, far greater than anything we have experienced with Iraq so far."

Because the catastrophic consequences of an attack on Iran are obvious, many in Washington have a fairly benign take on the current round of saber rattling. They believe the sheer dread of war is being used to bolster diplomatic efforts to solve the crisis and encourage hesitant members of the United Nations Security Council to take more decisive action. The Security Council, this argument goes, will be more likely to approve tighter sanctions if it believes that war is the only alternative.