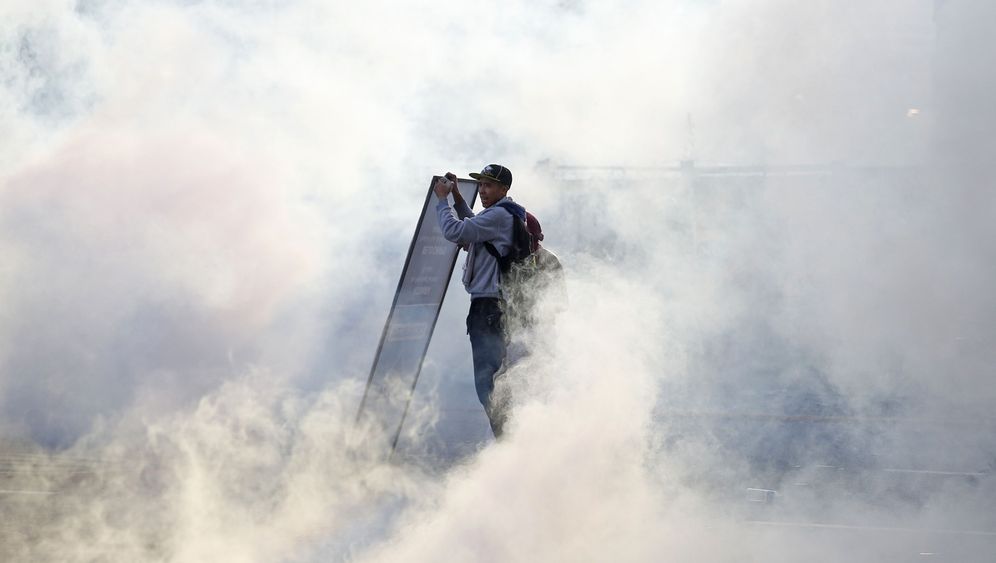 The smell of smoke wafts over Caracas. A group of young women have built a barricade of wooden pallets and garbage bags and lit it on fire on the main street running through Bello Monte, a middle-class quarter of the Venezuelan capital.

A petite university student named Elisabeth Camacho fiddles with a gas canister and clutches a stick bristling with nails. She is wearing a white T-shirt and a baseball cap in Venezuela's national colors, a kind of uniform worn by many of the demonstrators. She appears relaxed and ignores the curses coming from drivers struggling to turn their cars around. "We demand security," she says. "The government needs to finally stop the violence."

Students have been protesting in Caracas for days, building barricades on city streets and occupying squares. The movement began two weeks ago in San Cristóbal, in the state of Táchira near the border with Colombia. In just a few days, it spread across the entire country.

The students are protesting against inflation, shortages and corruption. Mostly, though, they are taking to the streets in opposition to the violence meted out by the country's paramilitary shock troops. "We are going to protest until the government disarms the colectivos," says Camacho.

"Colectivos" is the name given to the brutal militias that even late President Hugo Chávez supported. Now, the government of his successor, Nicolás Maduro, is sending the thugs after opposition activists, with masked men on motorcycles speeding through the streets, firing on demonstrators and, sometimes, following students all the way back to their universities. At least 13 people have died in the unrest, with 150 having been injured.

Last Tuesday, government toughs terrorized the quarter of Altamira, a hotbed of opposition in Caracas. For hours, some 150 motorcycles sped through the central square with thugs firing guns into the air. A handful of passersby were wounded by the bullets.

One day later, Maduro co-opted the country's television channels to publicly ridicule his opponents. Wearing a bright red shirt, he hosted the live show, playing the role of an MC in a performance reminiscent of his predecessor. Chávez used to call opposition supporters "scrawny." Maduro prefers to call them "fascists."

Indeed, Maduro behaves a lot like a mustachioed Chávez, but lacks his forerunner's humor and, especially, his aplomb. He often seems tense; he picks at his shirt and stumbles over his words.

Chávez died just under one year ago, but began grooming Maduro as his crown prince a few months prior. No one was as obedient as Maduro, a former bus driver that Chávez made into a government minister. It was a terrible decision for the country: What Maduro lacks in charisma, he makes up for in radicalism. He has ruined the country's economy and has often turned to Cuba, his closest ally, for guidance. And he has attempted to silence the opposition with a campaign of pure terror. Recently, though, it has begun looking as though he will have difficulty regaining the upper hand over the protests.

When Maduro's term began, hopes had been high that he would be able to reconcile his divided country. He sought out contact with the US and gave the impression that he was willing to open a dialogue with opposition politicians. But last week, he expelled three American diplomats, claiming they had supported "the opposition fascists."

Recently, he has encroached on freedom of expression to a greater degree than even Chávez did. He arranged the purchase of the last remaining television station in Venezuela that was critical of the government and has unleashed his supporters on the "fascist broadcaster" CNN and on other foreign journalists. A "deputy minister for social networks" has been charged with monitoring what Venezuelans post on Twitter and elsewhere, while the two largest government-critical newspapers have had trouble publishing due to a paper shortage.

The president is a stubborn ideologue hiding behind a jovial façade. He has launched a new wave of expropriations and increased government control in slums, with neighborhood organizations modeled after Cuba's "committees for the defense of the revolution" monitoring residents.

The Voice of the Opposition

Maduro travels frequently to Havana for consultations with the Castro brothers; he was also their preference to succeed Chávez. Cubans also monitor Venezuela's security apparatus, to the point that they even issue personal IDs. But in recent weeks, a potentially dangerous opponent to Maduro has emerged.

Representative Mariá Corina Machado receives visitors in the office of her organization, La Salida, which means "the exit." Machado is the closest ally of opposition politician Leopoldo López, 42. She keeps things moving while Salida leader López sits in a military prison waiting for the Maduro regime to put him on trial.

López, a Harvard graduate and a former mayor of the prosperous municipality of Chacao, is the voice of the opposition. He is chivalrous, charismatic and impatient. He only begrudgingly accepted Enrique Capriles, the moderate governor of Miranda, as the opposition's candidate in the presidential election last April. He had wanted to run himself.

Maduro won by a razor-thin majority and López has never accepted the election result. He broke with Capriles and threw his support behind the student protest movement. After three protesters were killed during violent clashes in Caracas on Feb. 12, the government held López responsible, with prosecutors accusing him of incitement to murder. With proceedings now having begun, the judiciary has reduced the charges to destruction of public property.

López went into hiding for five days, only to turn himself in in a maneuver worthy of Hollywood: Waving a Venezuelan flag during a mass demonstration, he climbed into a military vehicle and was driven in a convoy to jail, escorted by his supporters. He became a martyr overnight and is now the best-known opposition figure in the country.

The risks López is taking are significant. He is polarizing the country and openly challenging the regime. "We don't want to wait six years until the next election. By then, the country will be ruined," says his ally Corina Machado. "Maduro should resign as soon as possible."

But are López's actions calculated? Or are they born out of desperation? For 12 years, the opposition has been doing everything it can to topple the government. Activists have staged an overthrow attempt, organized referenda and put up candidates in elections -- but Chávez always won. The "Caudillo" was considered invincible.

That, though, cannot be said of Maduro. His victory in last year's election was anything but a landslide and even in the slums -- once the source of Chávez's power -- his economic policies are not well received. In order to combat the country's massive inflation of over 50 percent, Maduro has introduced price controls. Shops that demand prices that he believes are too high are simply occupied. "We will guarantee everyone has a plasma television," the president has said, and has forced stores to sell them cheaply.

"It is plundering under the aegis of the state," says Diego Arria, formerly Venezuela's UN ambassador. "Maduro is destroying the private sector."

Oil production is responsible for roughly a third of the country's economic output and over 70 percent of consumer goods are imported. But the yield from Venezuela's oil wells has been dropping for years and gasoline and foodstuffs are heavily subsidized. And now, the government is running out of hard cash. The official exchange rate is around 6.3 bolívars to the dollar, but on the black market, one can get up to 84 bolívars for a US dollar.

Many shops are empty, with even corn flour, milk and toilet paper subject to shortages. Lines like those seen in Cuba have become common and people are desperately trying to get their hands on dollars. "A perfect storm is brewing in Venezuela," says Arria.

The government has been having difficulties supplying even the basics in the slums of Caracas. In the vast quarter of "23 de enero," people stand in long lines in front of the state-run supermarket; they are issued numbers on strips of cardboard. Chavistas control entry to the store and glorify Maduro and the revolution to shoppers. Most of those waiting remain silent. Every three days, they mumble quietly when the guards aren't paying attention, their food coupons will get them chicken from Brazil and two kilograms of flour, but nothing more.

Venezuela's military has more power under Maduro, a civilian, than it did under the former officer Chávez. Maduro has handed out senior jobs to some 2,000 soldiers and the military now occupies key positions in business and controls entire companies. Late last week, Maduro sent a parachute battalion to Táchira to curtail the protests there.

But even in the military, dissatisfaction is spreading. "The soldiers just haven't yet had the courage to open their mouths," says one administrative employee who works in Fuerte Tiuna, a military base on the outskirts of Caracas.

Even Chávez had begun to realize that the enemy was within. He had officers and a former defense minister who had been critical of him arrested and imprisoned on charges of corruption. Some of them remain locked up in the Ramo Verde military prison not far from Caracas -- just a few cells away from Leopoldo López.

In front of the prison, a group of women is gathered, the mothers of the dozens of university students who have been arrested in the course of the protests. Some of the prisoners are minors, others are injured. "They beat my son on his head," says Beatriz Munga, a desperately worried mother. "I just want to know how he is doing."

She pulls out her cell phone and shows a video that her sons' protest companions made. Shots and blows can be heard, motorcycle engines roar and someone screams. Then, the screen goes black.

Translated from the German by Charles Hawley