When Doña Elena Frías de Chavez goes to church, she is accompanied by seven bodyguards and driven in a small convoy of three armored Ford SUVs. It is shortly after seven, and the mass has just begun in the church of Cristo Rey in Barinas, a city of 270,000 people on the hot plains of western Venezuela. The mother of the Venezuelan president takes a seat in the second row. She is wearing a turquoise blouse and sunglasses, and her hair is dyed blonde.

Venezuelan President Hugo Chavez comes from a devout family. Doña Elena used to walk to mass at her church, which was only two blocks from her old house. But now she and her husband live in an enormous mansion in a well-to-do section of Barinas.

The old house is empty. Nothing about the unadorned, yellow single-story building suggests that the president spent part of his childhood there. Hugo de los Reyes Chavez, the president's father, has been the governor of the state of Barinas for the past decade. He ran for re-election four years ago under the slogan: "Vote for the father, because the son cannot deny him any request."

This is apparently true of the entire family. Since Hugo Chavez, a former paratrooper who later staged a military coup and is now the leader of the Latin American Left, was elected president in 1998, his once-humble mestizo family has become a wealthy clan. The Chavez family is believed to own 17 farms, several of them, as the opposition claims, acquired through straw men. "The Chavezes are the new oligarchs of Barinas," says Antonio Bastidas, a former neighbor and member of the opposition today.

Hugo de los Reyes Chavez, a former village teacher who is now called "El Maestro" in Barinas, has six sons, and all of them are extremely well provided for. Adelis is a vice president at Banco Sofitasa, which handles the business dealings of the Barinas government. Anibal is the mayor of Chavez's hometown of Sabaneta, Narciso heads the government's office of Venezuela-Cuban cooperation and Argenis is the head of his father's cabinet. Argenis became the de facto head of the family when "El Maestro" suffered a stroke a few years ago. Chavez's cousin Asdrubal is vice-president of the refinery business of the state-owned oil company, PDVSA.

Adan, the eldest of the Chavez brothers, has the reputation of being the family intellectual, and he has held posts as Venezuela's ambassador to Cuba and its education minister. Of all his brothers, Chavez trusts Adan the most, which is why he has now entrusted him with a delicate mission: Adan is running as a candidate to succeed his father in the gubernatorial election on Sunday. His task is to protect the president against the possibility of an ignominious defeat in the "Cradle of the Revolution," the term Chavez likes to use to describe his native state.

The regional elections will be the first trial of strength for the president since last year's failed constitutional referendum, with which autocratic leader Chavez had sought to secure for himself the possibility of unlimited re-election. According to opinion polls, six key states could go to the opposition in Sunday's vote.

Ironically, an effective opposition to the Comandante has developed among his own supporters, the "Chavistas," and some of the renegades are now running as independent candidates. In Barinas, for example, Adan Chavez is running neck-and-neck with the city's mayor, a former Chavez supporter. "We are tired of the nepotism in the president's family," says opposition candidate Simon Jimenez. "Chavez has established a new monarchy."

Barinas, as a microcosm of Venezuelan society, is the perfect place in which to study the rise and fall of the Caudillo. A four-lane highway leads to Sabaneta, his hometown, 60 kilometers (37 miles) from the provincial capital. There is no guardrail in the middle of the highway, because it doubles as a runway for Chavez's jet when he comes to visit Sabaneta. 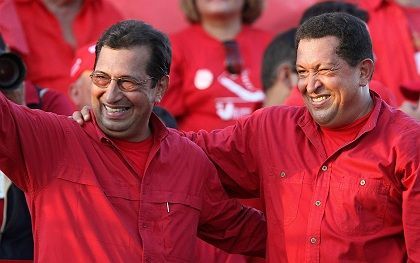 Adan Chavez is Hugo's most trusted brother. He is now running to succeed his father as the governor of the state of Barinas on Sunday.

Mayor Aníbal Chavez has had the street signs painted red, and the house where the president was born, now home to party offices, is painted pink. Many streets in this small, dusty city are unpaved, dotted with knee-deep puddles during heavy rains.

Hugo de los Reyes Chavez and his wife lived here with their two eldest sons until they moved to Barinas in the late 1960s. "Hugo, the second-born, was the most personable of the sons," says former neighbor Bastidas. "He was fascinated by weapons and interested in history."

Hugo Senior was a member of the Social Christian Party of Venezuela (COPEI), but his sons rebelled against what they dubbed "Venezuela's rotten elite" and the "party dictatorship," which they believed had dominated the country until Chavez's election victory in 1998. Doña Elena held the family together with an iron hand.

The village teacher and his wife were people of modest means. Today the governor's salary is a state secret, and Doña Elena makes no effort to hide her expensive taste in jewelry. Barinas is filled with rumors about how the clan came into its money. Two investigations into allegations of illegal enrichment are on hold with the district attorney's office.

Local residents are especially indignant over the story behind the La Carolina football stadium. It was supposed to be inaugurated during the Copa America South American football competition last year, but the structure is still under construction today. Only one match -- between the United States and Paraguay -- took place there, on the construction site and during the day, because the floodlights were missing. Adelis Chavez was in charge of financing for the mammoth project.

There are other tales of Chavez family corruption. The president has already dedicated the state-owned CAAEZ sugar refinery, a $100 million (€78 million) project near Sabaneta, three times, and yet construction is still only half-finished. Another story strikes a particularly sensitive note among the region's farmers, who used to grow corn and rice. Chavez convinced them to plant sugar cane instead, but now they are forced to burn half of their harvest because there is no plant to process the cane. "The president cheated the people," says David Hernandez, another former Chavez supporter.

The president and his family are not even popular among the residents of Sabaneta. Eight demonstrators and three police officers were injured there three weeks ago, when student protests turned violent. Hernandez, a dissident, was summoned by the secret police twice. He receives occasional death threats, and he is afraid to go out at night without bodyguards.

Chavez has never commented publicly on his clan's machinations, but he is believed to have complained at a family event about his relatives' undue enrichment. There are rumors in Barinas that he destroyed his brother Argenis's flashy Hummer with a baseball bat, and that their mother had to intervene.

Argenis was initially supposed to succeed his father as governor, but because he was involved in too many scandals, the president removed him from the line of fire. "Chavez doesn't want to risk his family's safety," says opposition candidate Jimenez.

Adan, the eldest, who is now running for governor, has been generous with his campaign gifts, hoping to bolster his prospects with voters despite everything. In a poor neighborhood in Barinas, Chavez supporters sell pork knuckles, refrigerators and other articles at artificially low prices. Venezuelan coffee -- "100 percent nacional" -- is especially popular at five Bolivar a pound. Coffee is scarce in supermarkets, a consequence of socialist mismanagement of the economy.

Meanwhile Cuban doctors, sent to Venezuela by Fidel Castro in return for low-priced oil shipments, are writing prescriptions for free glasses and medications. "We are all voting for Adan," says Alberto Bueno, a carpenter standing in line for new glasses in the Mi Jardin II neighborhood.

The president's United Socialist Party of Venezuela has organized a "youth concert," to be held on playing fields on the city's outskirts. The audience is taken to the site in buses, but the venue is much too big.

Chavez's brother Adan waves to the audience, but refrains from giving a speech. The VIP stand where his parents are sitting is as red as the T-shirt his mother is wearing. Doña Elena looks determined, raising her fist in a gesture of defiance.

She plans to attend mass, as always, before the elections on Sunday. And she intends to pray for her sons.