Moderate Islamists with the Ennahda Party emerged this week as the victors in Tunisia's first-ever free elections. The precise number of votes they secured hasn't been finalized, but with more than half of all districting reporting they are projected to win around 40 percent of the seats in a new constitutional assembly.

Many in the West are confused by the results. They recall images of happy young people on the streets of Tunis who in January toppled their dictator and celebrated their newfound freedom. Now the Islamists have won? How could it be that, given their first chance to vote, the people would cast their ballots for religious parties? Germany's Bild tabloid newspaper even went so far as to ask: "Can I still take my beach vacation in Tunisia?"

It would be easy and indeed tempting to link the news of the victory of the Islamists in Tunisia with news of the reintroduction of polygamy in Libya. But these countries are worlds apart. For starters, Tunisia's election result is in no way surprising -- nor is it reason for panic.

First of all, it marks a victory for democracy. Sunday's election took place without any problems, it was perfectly organized and free and fair, as all international observers confirmed. More than 50 percent of those eligible to vote went to the polls. That's very good news in a country in which democratic elections are taking place for the first time. In addition, a very large number of people, possibly even the majority, voted for parties that aren't defined by religion.

Nor is it expected that Tunisia will become a theocracy on the model of Iran. The vast majority of Islamists with the Ennahda Party are moderates. Rashid al-Ghannushi, their leader, has emphasized repeatedly that his party supports the gender equality anchored in the old constitution and that they will not force women to wear a headscarf, either. He has also said his party has no intention of introducing polygamy or extreme forms of punishment. Ghannushi likes to compare Ennahda's positions to those of the moderate Islamists with Turkey's governing Justice and Development Party (AKP).

Of course, Ennahda is a very large movement and it also includes factions that are more conservative than the party's current leadership. But most voters who supported Ennahda didn't do so because of a yearning for a rigid, religious regime. They were instead attracted by the party's credibility -- and its perceived proximity to the common people.

Following Tunisia's independence from France in 1956, the country was guided according to a post-colonial Western model by a francophone elite. The country's founder, Habib Bourguiba, had no interest in religion, and he called the headscarf an "odious rag." At Ramadan, he allowed himself to be shown on television drinking orange juice, despite the fast. But under Bourguiba, Tunisia was no democracy. Under his successor Zine El Abidine Ben Ali, it became a dictatorship.

For decades, the regime persecuted Islamists, locking up its supporters in prisons and brutally torturing them. Many were forced to flee abroad -- including their leader, Ghannushi, who lived in London for 20 years and first returned home in January. The ruling powers wanted Islam to play a subordinate role in society. And it did. Before the revolution, the sight of women wearing headscarves was a rarity on the streets of Tunis and working women, at least in the capital, were plentiful. On the surface, the country had a Western face, but that was only half the truth.

The cultural and social divide in the country had always been big and it continued to grow in recent years. On the one side you had the rich Tunisian elite in Tunis, who were often educated in France and tried to emulate the French lifestyle -- sometimes even preferring to speak French over Arabic.

On the other, you had the common, mostly conservative population in the country's interior and the capital city's impoverished suburbs. It wasn't the elite who started the revolution and toppled Ben Ali, but rather the young people from the country's poorest regions who were jobless and desperate. It was this group who fought the police for weeks and from whose ranks the largest number of casualties came.

Many of them have now voted for Ennahda. In their eyes, Ennahda embodies everything the previous rulers did not: They are trustworthy, they aren't corrupt, they are morally unobjectionable and the party is socially minded. They were persecuted by Ben Ali, they were outsiders and they didn't profit from the old system -- something that one couldn't say with confidence about many other politicians. Ennahda also presented the prospect of an economic boom built on the Turkish model in its campaign and succeeded in positioning itself as the party most likely to preserve Tunisia's "Arab-Muslim" identity.

Ennahda's success is also a slap in the face to the Western-oriented Tunisian elite, whose secular, left-liberal parties achieved mediocre or even disastrous results in some cases. They were unable to connect with the simple rural population, whereas Ennahdas enjoyed a massive triumph among these voters. For one, Ennahda was able to reach out to them because it is better organized and financially stronger than other parties. The party has tens of thousands of members around the country, they campaigned relentlessly and it was the only one that succeeded in sending observers to all the polls.

More than that, though, whereas the elite party candidates may have had nothing to do with Ben Ali, they still looked to the voters like representatives of the old system. That, at least, was the case with Ahmed Nejib Chebbi, a smoothly shaven man who wears a suit and speaks perfect French. In recent years, he had positioned himself as an opponent of Ben Ali, and during the campaign he cast himself as the most critical counter candidate to Ennahda with his left-liberal centrist Progressive Democratic Party (PDP). Despite high expectations, his party looks to have won only a handful of seats.

It's not just in Europe that people are worried about the Islamists' win. Proponents of secular politics and women's rights in Tunisia are also concerned. And by now it is indeed certain that Islam will have considerable clout in Tunisia in the future. Since the revolution, the sight of the headscarf or men wearing beards has become much more common. There have also been reports of imams being driven out of mosques because they are considered to be too liberal. And one week before the election, a broadcast of the animated film "Persepolis," which includes an image of Allah in defiance of Islamic rules prohibiting his depiction, triggered violent protests.

Nevertheless, Tunisia has always been one of the most liberal Muslim countries. It's populace is mostly conservative, but it is not considered deeply religious and it is thoroughly influenced by European ideas. It's a country that is also dependent on tourists and foreign investment and the Islamists will neither wish to, nor can it afford to, scare them away.

Ennahda won't be able to govern alone. The majority of Tunisians didn't vote for the party and it will likely have to seek partners from the ranks of the secular parties in order to form a coalition government. Ennahda leaders have already begun holding the first talks -- prior even to the announcement of the final election results. They have named Secretary General Hamadi Jebali as a candidate for prime minister, but stated they would not name one for president.

A party spokesman indicated Ennahda will seek to form a national unity government. That would provide a symbol of conciliation and also guarantee the stability that is so urgently needed in Tunisia right now. The politicians must take steps to stimulate the ailing economy and they need to agree on the language of a constitution.

It will likely be a rocky road. Political views in the country are widely divergent and it will be difficult to combine the Islamists' wish for a return to the country's Arab-Muslim roots with the Western values of the francophone, liberal urban classes. But the fact that the election went so smoothly is an encouraging sign that Tunisia might be ready for the democratic back-and-forth that will be necessary.

Under the current plan, the constitutional assembly should complete its work within one year -- at which time new elections will be held. At that point, all the other parties will have another chance. 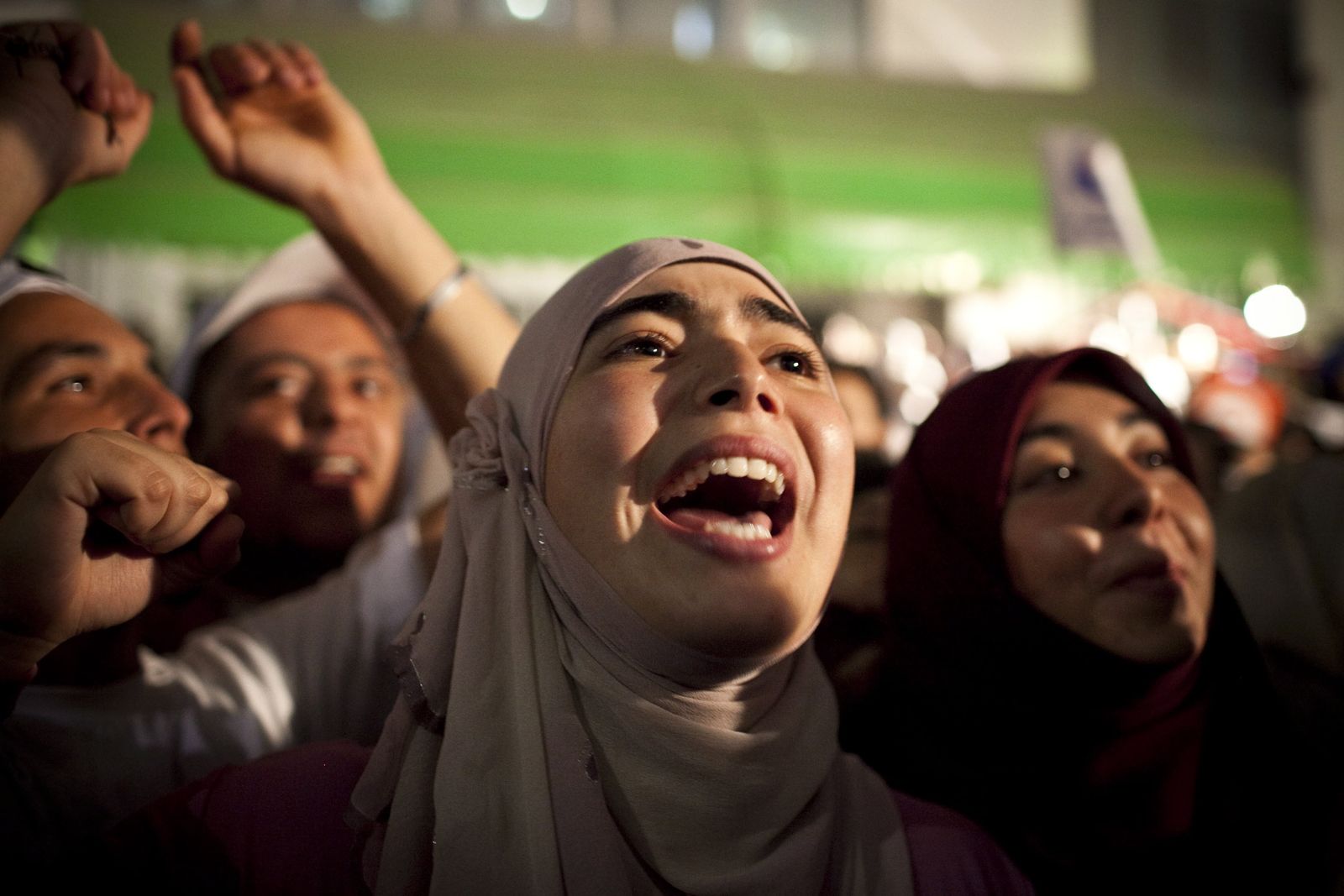 Supporters of the Islamist Ennahda party celebrate their election victory.