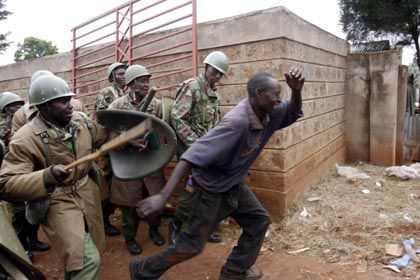 An opposition supporter runs from police in Kibera, a slum which is an opposition stronghold in Nairobi on Monday.

Police in the Kenyan capital Nairobi and other parts of the country opened fire on supporters of opposition leader Raila Odinga, killing scores of people who were protesting against alleged fraud in the election that returned President Mwai Kibaki to power on Sunday.

In the Nairobi slum area of Kangemi police pulled members of the Luo tribe, which Odinga belongs to, out of their corrugated tin huts and even assaulted pregnant women with their wooden batons. There are reports of many deaths elsewhere -- in Nairobi's Kibera slum and in the town of Kisumu in western Kenya.

The government is rumored to have signed an arrest warrant for Odinga because he has challenged the election outcome and announced he would have himself inaugurated as "the people's president" on Monday on Uhuru Square in the center of Nairobi.

The government responded by despatching police to the square. On Monday morning Odinga met with members of his Orange Democratic Movement at the party's headquarters in Nairobi. He said Kenya was undergoing a "civilian coup."

"There is no difference between him (Kibaki) and Idi Amin and other military dictators who have seized power through the barrel of the gun," he said.

All over Kenya ethnic clashes have broken out between the Kikuyu, whom Mwai Kibaki belongs to, and the Luo of challenger Odinga. Roadblocks have gone up and people are being chased through the streets. Thousands started leaving the Kibera slum in Nairobi on Monday morning, fleeing the paramilitary as well as Kenyans from other ethnic groups.

"There have been deaths all over the country," Odinga told SPIEGEL ONLINE. "And the violence clearly originates from the police. They have shot dead innocent people: in Kisumu, in Eldoret, in Kericho."

"There is danger of a civil war. Africans are losing faith in democracy," said Odinga. Odinga called on his supporters to remain calm and refrain from looting. A bloodbath cannot be in his interest.

Kibaki was sworn in on Sunday for a second term as Kenya's president after beating Odinga by 231,728 votes. Odinga has rejected the outcome and international observers have expressed concern that there were "irregularities'' in vote counting.

Odinga said the opposition had three options: civil disobedience, resistance in parliament and action through the law courts. But it's unclear how long the country's democratic institutions will go on functioning. Foreign observers say Kenya is heading towards military dictatorship. Kibaki evidently has to resort to violence to suppress the anger of voters.

The election made clear that the people want democracy and change. There is no other explanation for the kilometer-long queues in front of polling stations and the unusually high voter turnout of 70 percent. Many walked for hours to cast their ballot.

The Kenyan election was obviously fraudulent: There were areas where the voter turnout was 115 percent; Election officials who vanished without a trace along with their ballot boxes; Incredible delays in vote counting; Discrepancies between the number of ballots counted locally and the number that reached the capital Nairobi, and foreign election observers were turned away. The list of irregularities is endless.

The accusations of ballot rigging haven't just been levelled at the government but at the opposition as well. When electoral commission chairman Samuel Kivuitu declared the president the winner on Kenyan state television, the scene would have been faintly comical if violent unrest had not already broken out around the country.

If President Kibaki, who always appears slightly senile, had not been so hungry for power, he would have had to reject the outcome of the vote until all the justified doubts about it had been removed. His opponent had demanded a recount in 48 electoral districts. Why didn't he agree if he was so confident of having genuinely won the election?

Now Kibaki remains the president but the people are revolting. It's quite possible that the army will soon intervene, and it's unclear who the military top brass trusts more: The recently re-elected president or the popular opposition leader.

Shutting down television news broadcasts was a Banana Republic-style act of stupidity on the part of the president. Declaring Dec. 31 a national holiday isn't likely to calm the people down either, given that Kenyans already have holidays celebrating the birthday of the nation's founding father Jomo Kenyatta, the birthday of the former dictator Daniel arap Moi and a number of other days marking the troubled history of this safari state.

The Fight Against Corruption

Could this trouble have been foreseen? When Kibaki came to power five years ago he solemnly declared that his government would make the fight against corruption its main task. And he pledged to do away with the personality cult that his predecessor arap Moi had nurtured.

But it wasn't long before Kibaki had his face minted on 40 cent coins and his picture started smiling benignly down from office walls in the countless government institutions.

Fighting corruption soon fell by the wayside. On the contrary. His entourage shamelessly enriched itself, much to the dismay of the British High Commissioner who as early as 2004 complained that they had misappropriated €125 million -- enough to buy 1,000 Mercedes S350 or build 15,000 classrooms, as the diplomat calculated.

The German Development Ministry provided Kibaki's team with €29 million in 2006, partly to help him fight corruption. Though it's not clear why the Kenyan government needed money from the German taxpayer to stop stealing.

Those who took a closer look could quickly detect Kibaki's true face. Kenya's Daily Nation newspaper likened the president and his first wife Lucy to French King Louis XVI and his queen, Marie Antoinette. The president announced during the election campaign that he would create the office of prime minister to curtail the presidential powers. But he soon stopped mentioning that idea. Street protests ensued. Kibaki's voters wanted to see change.

The new constitution Kibaki had promised also degenerated into a farce. The draft suddenly gave the president more powers than before and the president whipped it through in a referendum.

Kibaki increased his staff's fleet of Mercedes, sharply increased the salary of members of parliament in this bitterly poor country, handed top posts to fellow members of his Kikuyu tribe and secured development aid for his corruption fight.

Kibaki made a name for himself as a power-hungry and corrupt promoter of the Kikuyu people. When he wanted to increase his own salary to around $40,000 a month, he had to back down. That was simply too much.

Kenya now faces serious problems. Kibaki is to blame for the re-emergence of old tribal feuds. He liked to preach national unity but never practiced it. That's why he lost the election in six out of eight provinces. Despite the alleged fraud.

His power is based on the few tribes he protects, who voted him with 99 percent, and his own power apparatus.

His opponent Odinga now faces a dilemma. If he calls on his supporters to take to the streets, he will only exacerbate the situation. His opponents can then remove him as a security risk.

But if he tries to calm them down, if he remains passive and relies on a judicial investigation of the election, he will lose his status as a people's hero and the real election winner.