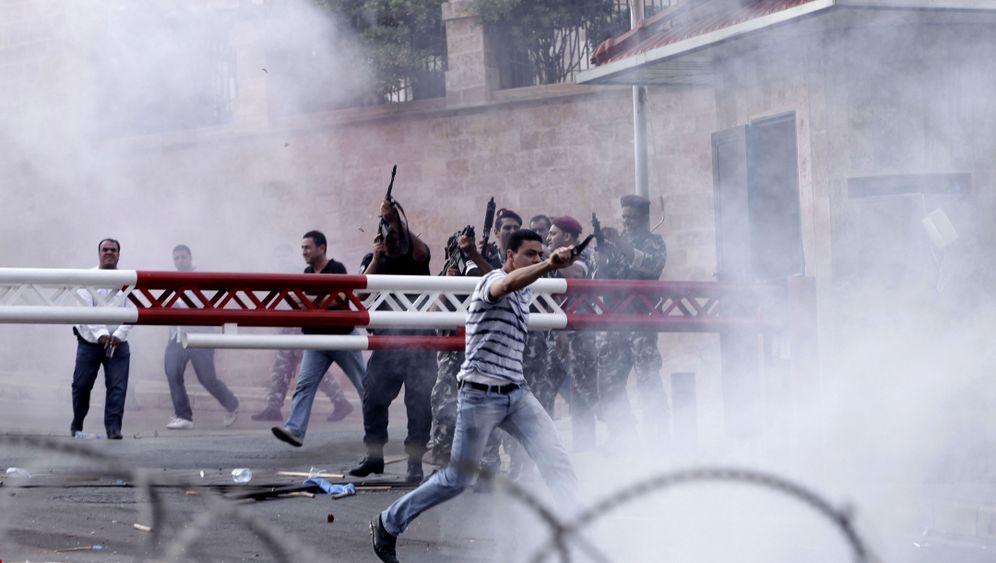 Violence from the conflict in Syria spilled into neighboring Lebanon this weekend, after a Lebanese security chief was killed in a car bomb and his funeral triggered protests against the government in Beirut. Though the violence lasted only hours, it exposed the fault lines in Lebanon that could erupt as the civil war rages in Syria.

On Friday, a car bomb killed eight people including Major General Wissam al-Hassan, a polarizing figure who is associated with Lebanon's Sunni led anti-Syrian faction. Hassan's investigation into the 2005 assassination of former Prime Minister Rafik al-Hariri ended up assigning blame to Syria and the Shiite militia Hezbollah, which the US government considers a terrorist organization.

After Hassan's state funeral on Sunday, opposition protests erupted into violence in Beirut, with protesters accusing Syria of being behind Hassan's assassination. Protestors say that Lebanese Prime Minister Najib Mikati is too close to the Syrian government, led by autocrat Bashar al-Assad.

Mikati, who assumed power in 2011 and is backed by Hezbollah, denounced Friday's attack and called for a national day of mourning, but was criticized for failing to make a public appearance. On Saturday, he had originally suggested that he might resign from office, but then announced he would stay in power after all.

Protestors gathered for the funeral in Beirut's Martyrs' Square and then moved to the streets in front of the prime minster's office, calling for him to step down. Security forces fired shots into the air and lobbed tear gas canisters into the crowd. By nightfall, violence had dissipated.

On Monday German newspapers said that it comes as no surprise that Lebanon is now being dragged into the Syrian civil war. They argue that if violence continues, it will only be a matter of time before the West will have to become involved as well.

"Lebanon's fate has always been closely tied to that of Syria. The power and religious fault lines between the Shiites and the Sunnis run through both countries, and have become more active as a result of the Arab Spring, which has strengthened the Sunnis in the region. The Lebanese Shiite group Hezbollah, which supports the current government, is thought to be the extension of the powerful clique surrounding Syrian President Bashar Assad -- and is also supported by Iran. The Sunnis, on the other hand, are supported by Saudi Arabia and the US for religious and geopolitical reasons."

"In his position as head of the secret service, Wissam al-Hassan had become increasingly bothersome to the Assad regime. He had initiated investigations into a former Lebanese cabinet member who was considered an Assad ally. He also uncovered Syrian plans to perpetrate attacks in Lebanon. Many Lebanese saw him as the patron saint of those who opposed Assad, and the opposition now hopes for a repeat of the Cedar Revolution, which was triggered seven years ago by the assassination of former Lebanese Prime Minister Rafik Hariri on Feb. 14, 2005. In a highly symbolic act, Hassan was buried on Sunday next to Hariri."

"For a deeply divided Lebanon, the coming days may prove decisive as to whether the country will be pulled into the Syrian conflict. It would be an escalation that could force the West to become more involved in the Syrian civil war than it wants to -- because Israel would be placed in even greater danger."

"It is little consolation that this escalation was only a matter of time: The civil war in Syria threatens to tear open old fronts in Lebanon. In Beirut, where the houses still carry scars of the civil war -- where under elegantly mirrored houses the pre-modern order of clans and tribes, religious dominations and ethnic groups still prevails -- people feel more vulnerable than elsewhere to the violence in Syria."

"The relationship between Syria and Lebanon has always been symbiotic. Even at the end of the 20th century, Syria dominated its smaller neighbor economically, militarily and politically. First the bomb attack on former Lebanese Prime Minister Rafik Hariri in 2005 drove the Lebanese to the streets and pushed the Syrian army out of the country. The regime in Damascus considered that ... to be intolerable."

"Now another attack has shaken the nation and again all eyes have turned to Syria. The murder of Lebanese intelligence chief Wissam al-Hassan removes one of Assad's most effective opponents in Beirut. Those wanting to trigger an eruption in an already wobbly country could not have found a better target."

"Lebanon had made great efforts to shake off the grasp of its nemesis Syria. Should it now sink into old hatreds, it will once again become a puppet state."

"The intent behind the killing of intelligence chief Wissam al-Hassan is clear. It was Syria's attempt to rid itself of a person who had been blocking attempts to destabilize Lebanon as a distraction from the war at home.

"The attack was not unexpected. Rami Makhlouf, Assad's powerful cousin, issued a warning in May 2011, back when the Syrian regime still had the country largely under control, that there would be "no stability" in neighboring countries should Syria become instable. The script has been written, now comes the reality. The easiest neighbor to destabilize is Lebanon, where the fragile balance can quickly be destroyed and which has always been the sounding board for crises in the Middle East."

"Even though Lebanese reacted to the assassination with a 'day of wrath,' it doesn't change the fact that Syria's civil war is jumping the borders in an increasingly threatening manner. Turkey already has its army on high alert and Israel practiced defense measures on Sunday. The United Nations envoy to Syria (Lakhdar) Brahimi has vainly urged for a temporary ceasefire. The Middle East has not yet erupted -- but it would still be a tragedy were Russian stubbornness be to blame for the international community remaining inactive."