When historical turning points present themselves, there's no avoiding the need for decisive action. Now that the Egyptian armed forces -- with the backing and the approval of a subservient civil government -- has brutally clamped down on protests by supporters of the Muslim Brotherhood, the Western world is at a crossroads. It is irrelevant if the number of casualties is 500 or over 1,000, depending on which source is to be believed. The reaction to this week's massacre in Cairo will be key to the reputations of the United States and Europe in Arab states and the Muslim world in general for years to come. Its credibility and influence are at stake.

As is often the case, the issue is not how much outrage and sympathy is triggered by shocking images of seriously injured men, helpless elderly women and crying children. The issue is how to balance realpolitik with human rights.

Do we want to issue stern diplomatic warnings and return to dialogue with a strongman at the top of the Egyptian government with blood on his hands but the clout to bring a modicum of stability to the country and the region, and a foreign policy stance that dovetails with ours?

Or do we want to issue stern diplomatic warnings against pushing the Muslim Brotherhood underground, thereby turning them into martyrs, and instead call for them to be supported in their rights -- even though the fundamentalist ideology of these bearded men is so alien to us and undoubtedly at least partly responsible for the current political turmoil? 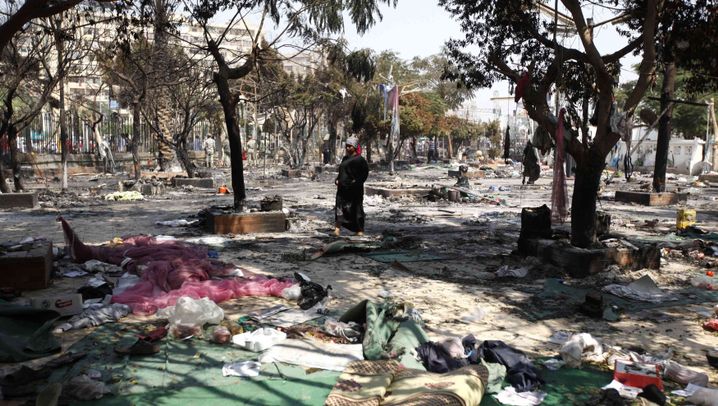 It is already apparent that there are two winners and one tragic loser in this crisis -- one a terrorist, one a general and one a Nobel Prize winner.

One of the winners is 62-year-old Aiman al-Zawahiri. The son of a professor of medicine from the Nile Delta, he was a surgeon himself who in the early 1970s joined the Muslim Brotherhood, which was outlawed at the time. Before too long he came to see them as insufficiently radical and helped found the Egyptian Islamic Jihad. In 1981, Zawahiri was arrested in connection with plans for a coup and was severely tortured in jail. After his release, he left Eygpt and joined Osama Bin Laden and al-Qaida in Afghanistan, taking over its leadership after his killing in June 2011. Since then, he has regularly released video messages from the underground.

In one of them, dating back some 18 months, he voiced disgust at his former brothers-in-arms, accusing the Muslim Brotherhood of what he called a "treasonous" acceptance of the "rules of the West." Zawahiri was incensed by the fact that the movement protested against the autocratic rule of former President Hosni Mubarak alongside liberals and leftists and then took part in democratic elections -- a move that is anathema to Islamist terrorists, who reject democracy.

Then, when the ultra-conservative movement's candidate Mohamed Morsi became the country's first freely elected president in June 2012, Zawahiri seemed to be once and for all on the losing side. The West applauded. The Egyptian armed forces stayed in their barracks. At first.

But the year that followed proved disastrous, with Morsi failing utterly to be the "leader for all Egyptians" he had promised to be. He signed an Islamist constitution into law, weakened the courts and harassed the media. His incompetence destroyed an already ailing economy. The opposition took to the streets, with 22 million Egyptians signing a petition calling for his resignation.

On July 3, the armed forces removed the president from office, placed him under house arrest and is now planning to put him on trial. Most Egyptians were relieved. There was talk of a "second revolution" but the development was essentially a coup. It was immediately obvious that the Muslim Brotherhood would never simply sit back and allow themselves to be stripped of power. They organized daily demonstrations and set up protest camps. Not so very different to what they did 18 months previously with liberals and leftists.

Not all the members of the Muslim Brotherhood stuck to their official aim of non-violent resistance. The movement appeared to have lost its direction. Then, last week, the Egyptian armed forces launched a violent crackdown against radicals who had urged supporters to embrace martyrdom. 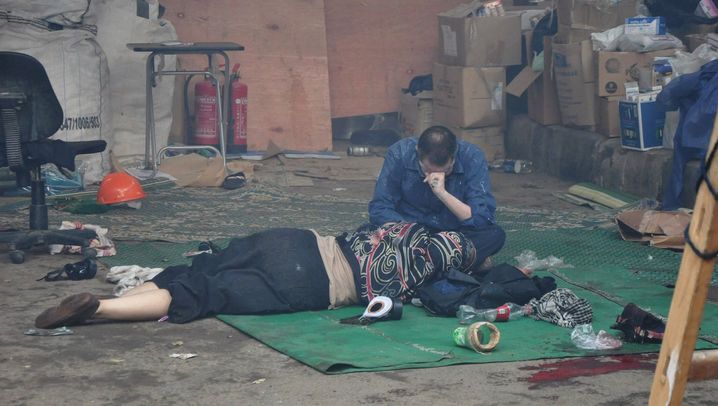 Photo Gallery: Bloodbath on the Streets of Cairo

Terrorist leader Zawahiri probably feels vindicated. A triumphant, "I told you so"-message could be delivered from his secret hideout any day. In his eyes, elections are for fantasists, only respected by the military and the West if they are won by secular parties they approve of. Such as the military coup in Algeria in 1991 --- backed by the West -- and the election in Gaza in 2006, when the West isolated the radical victors. Cairo in 2013 is no different.

The second winner of this bloody crackdown is 59-year-old Abd al-Fattah al-Sissi, who has emerged as Egypt's military strongman. His official role is as defense minister in the interim civilian government, but he clearly has what it takes to be the man of the hour. He was the one who called for mass protests against the organizers of "terrorism" -- the Muslim Brotherhood, in other words. He was the one who skillfully fanned the flames of nationalist fervor, evoking the era of his idol Nasser, who established himself as the pre-eminent Arab leader. He was the one who pledged to restore "order," jobs and economic stability. Combined with the militant intervention against the broadly reviled Muslim Brotherhood, this has, without a doubt, made him the most popular man in Egypt at the moment. But also the most controversial. Clearly, he only pays lip service to democracy.

General Sissi is considered to be a strictly devout Muslim and a guardian of fundamentalist morals -- indeed, he has been linked to the unspeakable virginity tests carried out at Tahrir Square. But good relations with the United States and the well-being of the Egyptian army were more important to him. Sissi attended the "war course" at the United States Army War College in Carlisle in 2006 and as since enjoyed very close personal contacts inside the Pentagon. In his own country, the army commander in chief has to take pains to ensure that the privileges of his fellow officers remain untouched.

The military is by far the most important economic power in Egypt, controlling hotels, gas stations, electronics companies and even noodle factories. It's a state within a state -- members of the military don't even vote because in Egypt they are held in a class above everything else. Anyone who tries to interfere with this gravy train is quickly moved out of the way.

Sisi, the victor, now says, wholeheartedly and generously, that he wants to keep the army forces in the barracks and to return the country to democracy according to a set schedule. But for now he has imposed a state of emergency for the next month, which gives him all the power in the world. Now things can be "cleaned."

A Major Loss for ElBaradei

The biggest, most tragic loser in the poker game for power in Egypt is 71-year-old Mohamed ElBaradei. The son of a prominent family of lawyers in Cairo, he studied both in Egypt and the United States. For more than 12 years, he served as the head of the International Atomic Energy Agency in Vienna, which monitors nuclear non-proliferation under the tutelage of the United Nations. In 2005, he received the Nobel Peace Prize for his work on behalf of the organization. When he retired from the IAEA in November 2009 after 12 years at its helm, most assumed the global citizen would quietly settle in his house in southern France and, at most, keep himself busy with speeches at leading universities and writing books. But political upheaval in his home country led him to pursue a different course. He moved to Cairo and got involved with the liberal, anti-Mubarak opposition.

In 2012, he founded his own Constitution Party. But the intellectual will never be a man of the people. After the Muslim Brotherhood's election victory, he found himself on the side of those who felt he needed to be offered a chance politically. Their failure was extremely difficult for ElBaradei -- and he considered Morsi's dismissal to be unavoidable and also supported the putsch (although he didn't want to think of it as such). "We had no other choice," he told SPIEGEL in an interview last month.

It was only after he was pressured to do so for some time and out of fear of the threat of a civil war that he finally agreed to assume the post of vice president in a non-elected government. He was also conscious of the fact that he would serve as its democratic calling card, making it clear in the interview that as "an important part of our society," the Muslim Brotherhood has to be included in the process of democratization. He added that former President Morsi "must be treated with dignity" and riots must be prevented from happening. "My red line is this," he said, "I don't align myself with anyone who ignores tolerance and democracy."

This red line was clearly and bloodily crossed on Wednesday. A visibly shocked ElBaradei said, "It has become too difficult to continue bearing responsibility for decisions I do not agree with and whose consequences I fear." He said he believed peaceful means for ending the clash in society had not been exhausted. What remains an open question is whether it was naiveté that allowed ElBaradei to express publicly on several occasions that he thought the military really would go back to the barracks and relinquish any direct political control. In this way, ElBaradei became a figure straight out of a Greek tragedy: He wanted to get involved in Egyptian politics because he believed he would also be perceived as guilty if he failed to do so. But he also has a responsibility to bear because, in his high position, he was unable to prevent the impending disaster despite considerable efforts.

The fronts in Egypt are clearly defined and the euphoria surrounding the awakening that came with the Arab Spring has subsided. Tunisia is threatened with failure, Libya is slipping back to its traditional tribal structures. And all those experts who had always warned that it would take a long time for democratic structures to develop in the Arab World and who pointed to the aftermath of the French Revolution as an example will no longer be speaking of minor aberrances -- instead, the entire project is being put to the test.

This goes to show that real progress is not a matter of free elections or the right to assemble, but of the checks and balances of functioning state organizations.

So what should the West do?

"In the end, the West will back the winning side," Emad Shahin, a professor of politics at the American University in Cairo, told the New York Times. "That is how dictators think, and to a certain extent it is true."

"If it looks like the US effectively colluded in a counterrevolution, then all the talk about democracy and Islam, about a new American relationship with the Islamic world, will be judged to have been the height of hypocrisy," Bruce Riedel, a former CIA analyst and counter-terrorism expert who now advises President Obama, told the New York Times.

If Obama wants to avoid this happening, his administration will need to be more assertive than it is currently being, and make it clear to the Egyptian armed forces that democracy entails freedom and rights even to its political opponents -- and that if it continues to refuse to talk to the Muslim Brotherhood, the US will withdraw $1.3 billion of annual military aid.