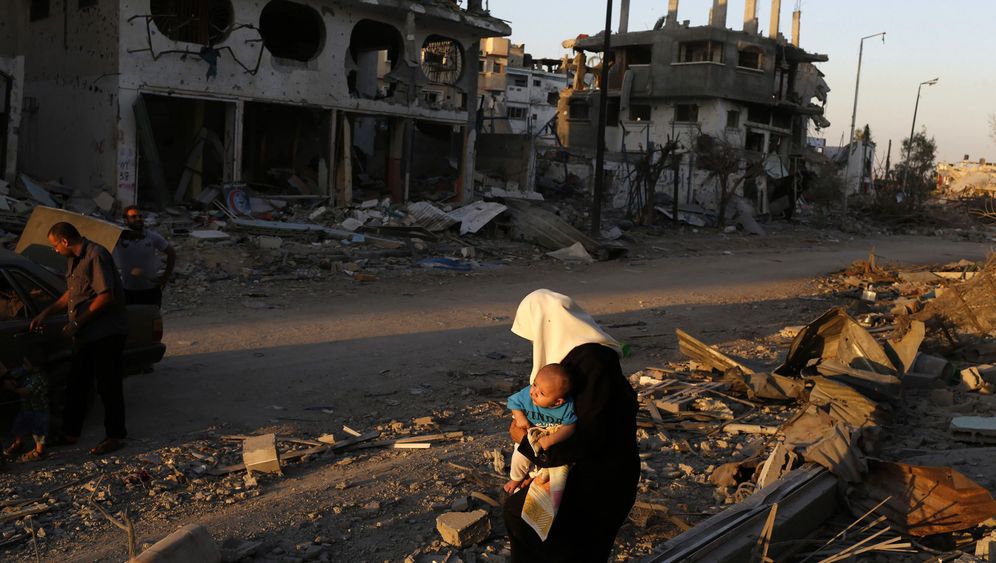 Photo Gallery: The Ruins of Gaza

A piece of a bed frame dangles from a lemon tree. Next to it hangs the remains of rattan shelves, destroyed and catapulted into the small yard by the explosion of a bomb. The detonation decimated the home of Hassan Khalil Ibrash, knocking over the mandarin-colored walls and transforming his bedroom into a terrace -- one with a grotesque view. His eyes revealing his exhaustion, Ibrash stands in flip-flops among the charred remains. Next to him, 12 stairs climb skyward like an incomplete sculpture.

He is surrounded by nothing but destruction, with dust rising from the gray ruins in the midday heat. Israeli bombs have almost completely razed Ibrash's neighborhood in Rafah, a town in the southernmost tip of the Gaza Strip.

Ibrash and his family were long unsure if they should return to see what remained of their home and now, they are the only ones in the area picking through the rubble. Ibrash came with his two daughters-in-law, Maisa and Nabila, and his grandchildren. The women had hoped that there might be enough left of the house to live in so that they could move out of the elementary school classroom they escaped to and now share with five other families. The classroom is filthy and foul smelling -- and bombs fall there too despite the white United Nations flag flying outside.

Hassan Ibrash says he never wants to go back to the classroom. But the women shake their heads. "How are we supposed to live in this rubble?" Maisa says.

The weekend saw yet more fighting in the Gaza Strip, with Israeli F-16 fighters flying low over Gaza City on Friday morning following last week's cease-fire. On Monday, a new, 72-hour cease-fire appeared to be holding, but hope is fragile in Gaza. Last week's truce proved tenuous, despite the populace's exhaustion following weeks of punishing fighting. The people want peace, but the militants from Hamas resumed firing rockets across the border, trapped in the brutal logic of those who have nothing left to lose. Violence continued throughout the weekend.

After leaving Cairo last Friday morning, the Israeli delegation has now returned to resume Gaza peace talks. Negotiations last week collapsed in part because of Israel's unwillingness to make any concessions, wary of giving Hamas a pretext for declaring victory. In particular, Hamas has demanded that the borders be opened, a desire shared by all those in the Gaza Strip.

Heading Home During the Cease-Fire

Above all else, this war has demonstrated that there is no military solution to the Gaza problem. Every confrontation in recent years, each new round of reciprocal killings, has pushed more people to the radical fringes. There is no way around the need to improve living conditions in the Gaza Strip, and it is in Israel's interest to recognize that imperative.

Last week's return to their neighborhood in Rafah was not the first time during the fighting that the Ibrash family sought to take advantage of a cease-fire to head home. Ten days ago, Hamas and Israel announced a truce that proved extremely short-lived. The family wound up cowering in their kitchen, the only room not facing towards the Israeli border; the sound of the bombing was deafening and the explosions closer than ever before. At one point, Nabila's daughter looked out the window and saw Israeli armored vehicles approaching their house. The family grabbed their donkey and headed for the UN school as quickly as they could.

That first cease-fire disintegrated rapidly, devolving into two days of almost constant shelling in Rafah. The offensive came as the Israeli army searched for Hadar Goldin, a 23-year-old soldier who had, it was thought, been captured by Hamas. The fighting that ensued was both controversial and deadly, with more than 130 Palestinians losing their lives. A UN school was also shelled and entire neighborhoods, including that of the Ibrash family, were demolished.

There were so many dead that refrigerators belonging to shops and supermarkets were emptied to make room for the corpses. In hindsight, the massive attack looks a lot like revenge for something that never actually happened. In an early morning press release last Sunday, the Israeli army suddenly announced that Goldin had been killed rather than abducted.

The announcement came after Israel had applied the so-called "Hannibal Directive," an Israeli army protocol designed to prevent Israeli soldiers from being captured during combat. Constant, intense artillery fire on residential areas was the result. Even Hamas' declaration that they hadn't taken the soldier prisoner did nothing to change the intensive shelling of Rafah. Both the US government and the United Nations condemned the attacks and demanded that the Israel Defense Forces quickly launch an investigation into the offensive. The central questions will focus on when the army knew that Goldin had been killed rather than captured and why they continued firing on Rafah nonetheless.

In the chronicle of this war, which lasted longer than any previous war between Israel and Hamas, Rafah is perhaps its most terrible chapter. But the fighting has been brutal everywhere, with almost 2,000 Palestinians having lost their lives, a majority of them civilians. Some 250 children under the age of 12 were killed. On the Israeli side, 64 soldiers died along with three civilians.

The destruction and suffering that this war has visited upon the people in the narrow Gaza Strip is extreme. Entire city and town quarters near the eastern border with Israel lie in ruin, as though destroyed by a powerful earthquake. Entire families were killed and at least 100,000 people lost their homes. Reconstruction will take years and cost billions.

And while Hassan Ibrash picks through the rubble where his house once stood, occasionally glancing up at the sky to identify potential dangers to his family, Mohammed al-Shaikh, 57, sits in his office just two kilometers away. He is the head of the school in Rafah that has housed displaced Gaza residents throughout the conflict -- one of seven such schools that were fired on by the Israeli army despite the fact that they were providing shelter to thousands of refugees. Ten people died in Shaikh's school, five of them children. He says that he sent the GPS coordinates of his school to the Israeli army twice each day.

Shaikh shrugs his shoulders and straightens his glasses. He isn't authorized to speak about the attack on his school, but he has plenty to say about the effects of the war on his six children. His generation, he says was completely different than the current one. He always hoped that the situation in the Gaza Strip would change one day, he says, and that peace, or at least a modicum of normality, would prevail.

But his children, Shaikh says, lost any such hope in the three wars that have taken place during their young lifetimes. Trapped in the squalor of the Gaza Strip, he says, they have become radicalized. Shaikh explains that he tried to demonstrate to them that living a normal life was possible, but he failed because of the wars. There's an air of resignation in his voice.

"They saw that they were alone, that there was no one to help" and that they weren't safe anywhere, he says. "This generation has nothing more to live for." He says that he has seen young girls, maybe first-graders, drawing the Star of David in the sand and writing "death" below it. Just this morning, he watched as three children, none older than seven, played "martyr" in the schoolyard. One of them lied down on a shred of fabric and played dead while the other two raised their arms in celebration yelling "Shahid! Shahid!" Martyr! Martyr! One of them shouted: "Israel, we will defeat you!"

For Mohammed Muhsin al-Ajami, 67, this child's game is reality. Ajami is the father of a killed Hamas fighter, an "Abu Shahid," as they are frequently called. He is sitting on his shady veranda in Beit Lahiyah, a town in the northern Gaza Strip; an Israeli shell exploded in his yard during the fighting. His son Tariq, 25, joined the resistance and lost his life fighting on the front lines, though Ajami doesn't know exactly where. He received a phone call with the news and a request to identify his son's remains. Tariq was lying in a refrigerator, his body covered with wounds and shrapnel.

Ajami says that Tariq came to him and his wife one night to take his leave, hugging his father and kissing his mother. He must go, his son told them, "live well!"

Tariq died for Gaza, his father says calmly, his hands carefully folded in his lap. And what else should he have done, Ajami asks? He had no money and no job despite having spent years looking for work. In the end, his father says, Tariq no longer even had dreams for a better future. There was only the sea, where he liked to go swimming.

His son, Ajami says, was fighting for the lifting of the blockade and an end to the occupation. "So that we can finally live normally here, like other people do in the world," Ajami says. He says that the death of Mohammed Abu Khdeir -- the teenager who was kidnapped and murdered by Israeli extremists in July -- particularly bothered Tariq. When the Israeli army sent their tanks and armored vehicles into the Gaza Strip, Tariq decided to join the fight.

His son, Tariq's father now says sadly, did the right thing. "Everyone who lived like us would send their children into battle," he says. But he didn't encourage Tariq to take up arms, he insists. His other seven sons are all married with children.

It isn't easy these days to find family members of Hamas fighters, much less the fighters themselves. Hamas has prohibited questions about the "resistance," urging the population to avoid offering images, interviews and answers.

Mohammed al-Ajami and his wife are unfazed by the directive. Even if the loss is painful says Raya, Tariq's mother, her son was courageous. "We want open borders, we want to be able to work our fields and bring in the harvest," she says. That hasn't been possible for a long time, she adds. She pats the head of one of her grandsons, who is maybe five years old, and says: "Maybe they too will have to continue the fight."